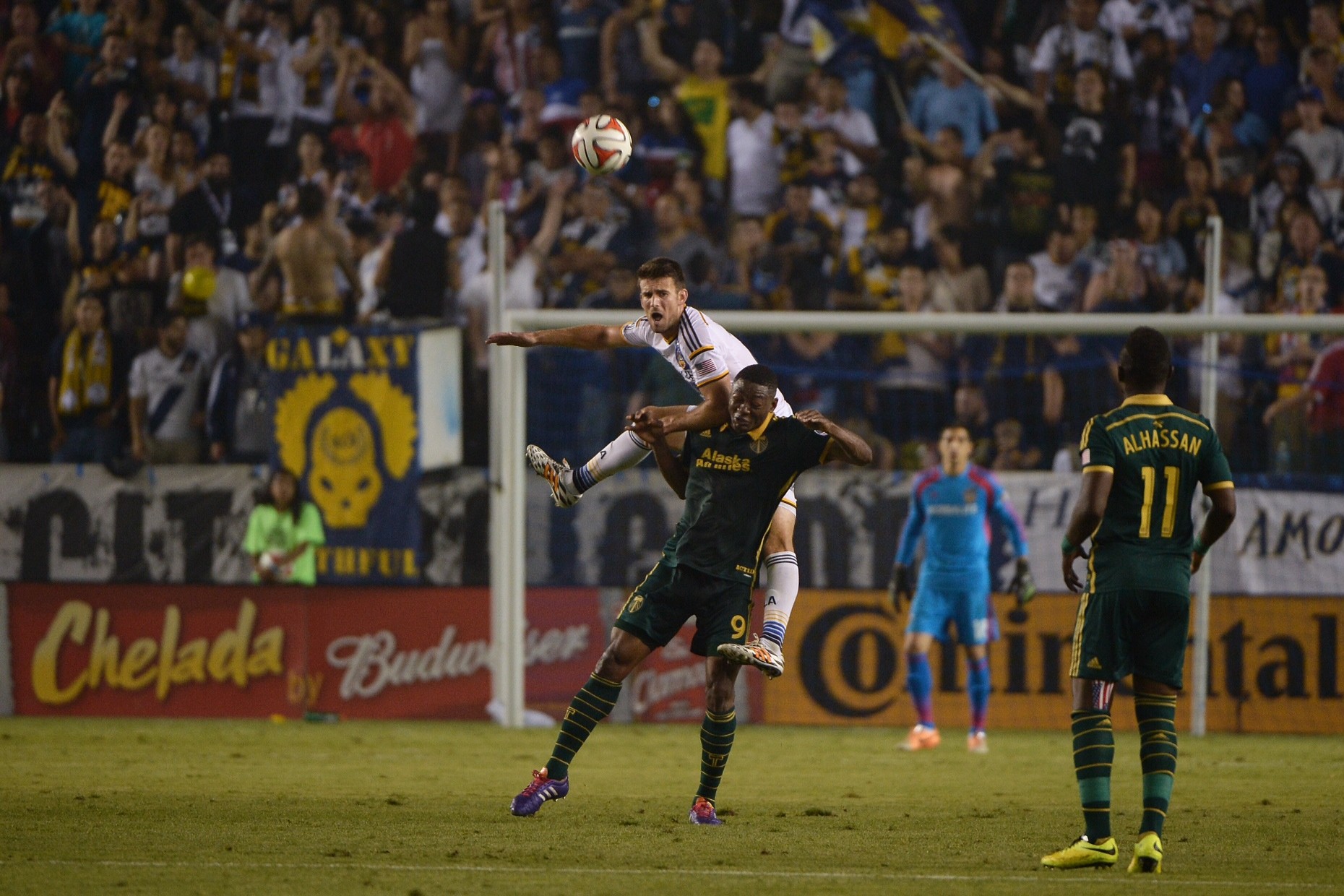 KEEP AN EYE ON: LA vs POR

I know what you’re thinking. Didn’t we just play the Portland Timbers? And the answer, of course, is yes. The LA Galaxy kicked off their busy July, a month which saw them get 10 points out of 5 league games, with a match against the Timbers. This is the third and final meeting between these two clubs for the 2014 season. You may remember the stoppage time goal-fest up in Portland on May 11th, where Robbie Keane and the LA Galaxy scored just into stoppage time only to see Portland and Diego Valeri hit an even deeper stoppage time goal that lead to a frustrating draw. Then it was the July 4th game at StubHub center that saw the LA Galaxy go up 1-0 early in the second half, for about 2 minutes, before Valeri equalized and Villafana pulled the Timbers ahead within 5 minutes of first going down a goal. It took a Portland own goal, an odd ricochet off Baggio Husidic‘s make a well-meaning cross, to eke out yet another draw. Now we turn our attention to Saturday and an 11:30AM start at StubHub Center to decide the season series between these two very similar clubs.

The LA Galaxy are sitting in 3rd place in the Western Conference and have 30 points off of 18 games played. Their average points per game (PPG) is 1.67 making it the second best in the West. Only Seattle, LA’s opponent last week has a better PPG. The Portland Timbers occupy the 7th spot in the conference despite being only 3 points behind the LA Galaxy. Portland has played 21 games and earned 27 points for a PPG of 1.29. Clearly Portland is looking to limit LA’s ability to break away from the logjam at 30 points that represents the 3 teams that are in the lead for the bottom playoff positions (LA Galaxy, Colorado Rapids, FC Dallas). Portland is coming off a 3-2 come-from-behind win over the Montreal Impact. And the Timbers will be on the road for their second game in a row. However, the late winner – once again from Designated Player Diego Valeri – only proved how much trouble the Portland defense had put them in. The Timbers have allowed a conference worst 35 goals this season. This ties them with Philadelphia for second worse in the league and puts them 2 goals in front of Montreal who’s allowed 37 goals. But where they lack in defense, Portland has made up for in offense. Tied for first in the league with the Seattle Sounders, their high-paced attack has put in 35 goals this season. Lead by striker Maxi Urruti with 8 goals, Captain Will Johnson and Gaston Fernandez with 6 goals, and the Galaxy-Killer Diego Valeri with 5, the goal scoring capability is well proven by this Cascadia team. This Portland team is full of players that can, and have, caused the LA Galaxy troubles. Nagbe, Fernandez, Chara and of course, Urruti and Valeri are all dangerous. And expect that Designated Player Fanendo Adi will be waiting to tally another goal to his four already. For the LA Galaxy, expect a full compliment of players to be available to Head Coach Bruce Arena. As long as no one has had any serious issues recovering from Monday nights 3-0 win over Seattle, the starting lineup shouldn’t change. Omar Gonzalez and AJ DeLaGarza should be paired in central defense with Dan Gargan and Robbie Rogers flanking them on the outside. Expect the midfield to consist of Juninho and Sarvas in the middle and Stefan Ishizaki should reprise his role as an outside midfielder (as long as Bruce isn’t swapping back and forth between him and Baggio Husidic). Landon Donovan will be doing his thing on the left hand side but that doesn’t mean you won’t find him mixing and matching between Keane and Zardes up top. The LA Galaxy have the league’s best defense. It’s time that they find a way to shut out a talented offensive team, just like they did against Seattle. This game will come down to the midfield match-ups. Will Juninho and Sarvas find room against the Timbers to outlet to Ishizaki and Donovan? And can the Galaxy’s outside backs, Robbie Rogers and Dan Gargan, make it into dangerous scoring positions in order to overload the fragile Portland defense? These teams are very even in all-time match ups. With 10 total meetings the Galaxy are 4-3-3. However the Timbers have never beaten the Galaxy in Los Angeles. The Galaxy have scored 9 goals and have 3 wins and 2 draws in the 5 meetings at StubHub Center. But if the Timbers are down late in the game, you cannot count them out. They’ve scored 20 goals in the final 30 minutes of the game. 12 of those goals have come in the final 15 minutes. The LA Galaxy defense will be tasked with putting a stop to these late game antics if they’re to walk away with the 3 points.