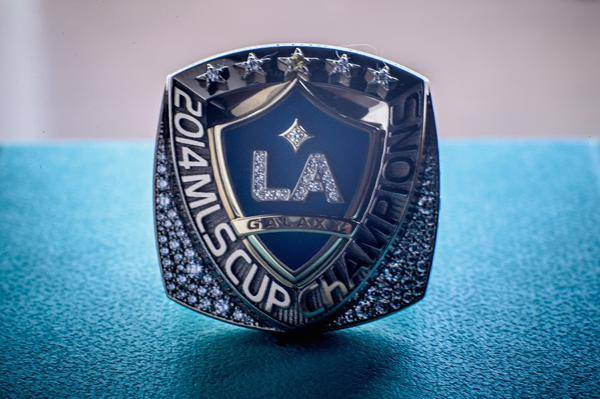 The LA Galaxy were presented with their 2014 MLS Cup Championship Rings at upscale restaurant, WP24 by Wolfgang Puck, at LA Live on Monday night at a private ceremony for the team. It came as a surprise for the players as they were presented the rings in a fancy food container. The rings were a first for many players including Gyasi Zardes. “It was breathtaking,” said Gyasi to LA Galaxy Insider Adam Serrano. “That’s my first ring ever and it was just crazy to see my name engraved on the side of it. Oh my goodness.”

For some this ring was just another part of a growing collection. AJ DeLaGarza, who now holds three MLS Cup Rings, told the LA Galaxy: “I love them all, but this ring is pretty sick.”

Tiffany & Co. presented the rings to the LA Galaxy in the authentic Tiffany’s Light Blue Box which is known everywhere. The ring features an LA Galaxy logo on the face, with five stars signifying the MLS Cups the Galaxy have won, the most recent championship star in gold, as well as a heavy dose of bling surrounding it. On the sides are the players’ names and numbers, as well as the Cup Final’s scoreline: “2-1.” Engraved on the back is the rallying cry that brought LA to the Cup: “First to Five.”

You will also have a chance to have a ring of your own as the Galaxy have announced as a part of their promotion schedule that they will be giving away Replica Championship Rings when they faceoff with the Seattle Sounders on April 12th at the StubHub Center. Get to the stadium early: the first 15,000 fans that enter the StubHub Center gates will receive these awesome replica rings!

Another beaut to add to the collection. pic.twitter.com/36OLDbagBq