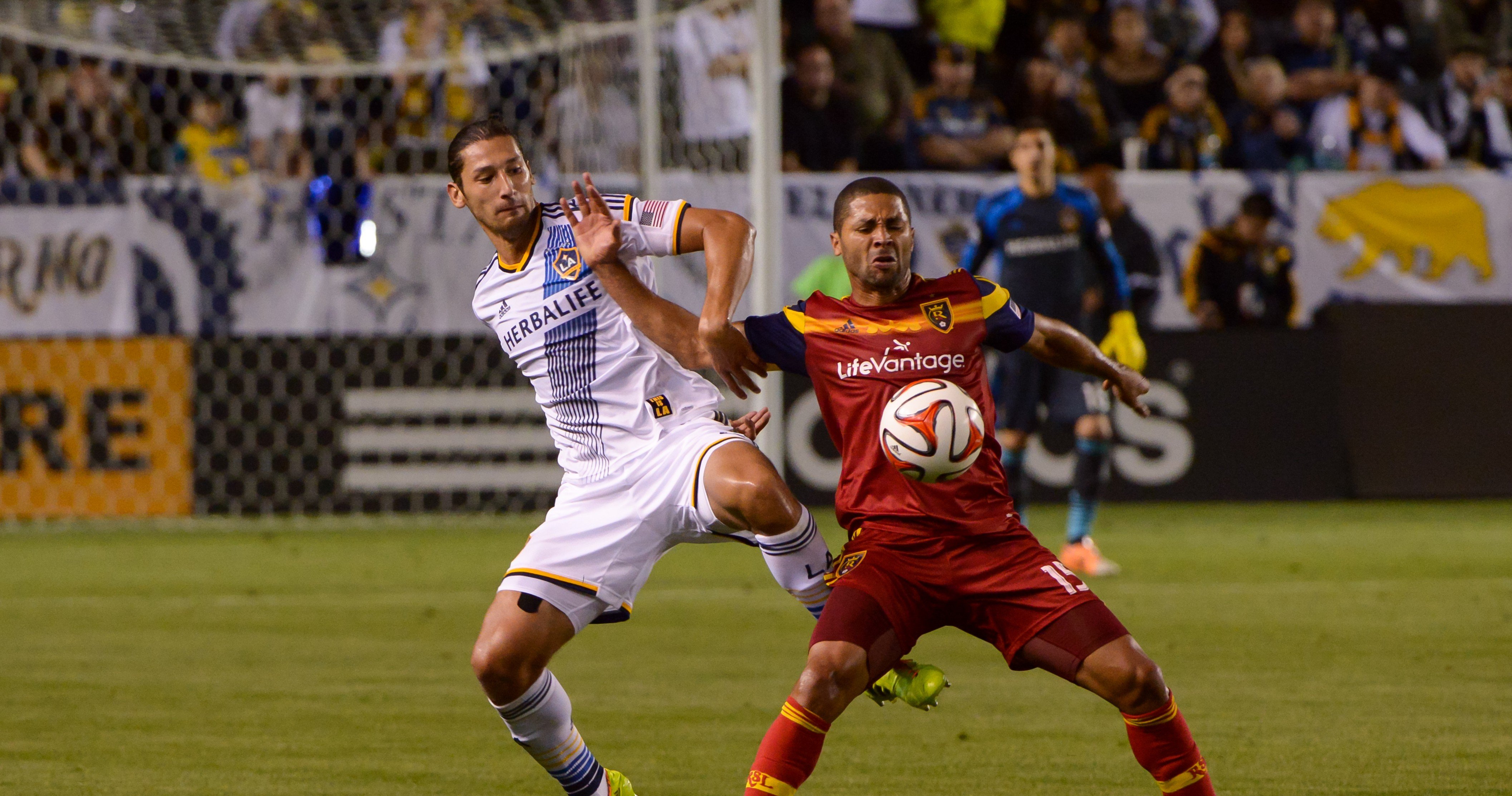 Keep An Eye On: RSL vs LA

Both the LA Galaxy and Real Salt Lake have busy schedules this week, including a Wednesday night clash against each other at Rio Tinto Stadium in Sandy, Utah. This may be quite an interesting match, as last time these two teams met was during Western Conference semifinals in last season’s playoffs. The Galaxy won a 5-0 match in those semifinals on home turf at Stubhub but tied at 0-0 when they met at Rio Tinto (See our post about the 2014 history between these two teams).

Real Salt Lake don’t have a win in their last four games and are in eighth place in the Western Conference with just ten points. Their last game took place on Friday at their home stadium against the San Jose Earthquakes and ended in a draw. The Earthquakes were ahead by one goal but the home side leveled when the Quakes unluckily suffered an own goal. What does this say about how RSL will play on Wednesday night? Well midfielder Kyle Beckerman says, “Forget the other team, whoever it is. Every team is tough for us right now. We’ve got to strive to get better. We’ve got to continue to work hard. We’ve got to figure out who we are and what we’re about and then try and work on that every week.” Beckerman has been a tough customer throughout his career, and he will be eager to push his team forward with a positive result in front of the home crowd.

The Galaxy have their work cut out for them regardless of the other teams motivation. They haven’t actually won an away game yet this season (0-2-2) and are looking at two consecutive road games this week. RSL has only lost one home game and so that raises the stakes a bit for our beloved LA Galaxy. To add a little injury to insult, it looks like Robbie Keane may not be back for this one, as he’s still out on a groin injury he incurred in a match on April 4th against the Vancouver Whitecaps. Gyasi Zardes says Keane’s absence won’t deter the team from going out on the pitch with fervor,

“Robbie is a phenomenal player. He is gone, but at the same time we’re professionals and he is gone. We are training on the field with the guys we have in this locker room. Whatever 11 guys are on the field, whether it’s with me, without me, with Robbie, or without Robbie, it doesn’t matter. The 11 that step on that field are prepared to play.”

Keane has only missed four consecutive matches like this once before, in 2011, when he was on international leave with Ireland for the 2012 European Championship. Also missing from the LA Galaxy for this match are Jose Villareal and Kenny Walker, with a hamstring and groin injury respectively keeping them off the pitch. Rounding out the injuries is Brian Perk who will be out all season due to an ankle fracture.

Ignacio Maganto made his Galaxy and MLS debut last weekend as a left-side midfielder for 72 minutes before being substituted by Alan Gordon. Maganto was a SuperDraft pick out of Iona College. The Spanish 23-year-old got a lot of positive feedback about his first performance in MLS and LA’s head coach, Bruce Arena, knows Maganto will be needed in games to come, “We wanted to give Maganto a start. We’re going to need those guys not only this month, but June and July. We have a very heavy schedule, so we have to have other guys playing,” It will be interesting to see his development continue as we head into the summer months and his opportunity for playing time increases.

Coming off of two consecutive draws, there is some good news for the LA Galaxy. They are unbeaten in four consecutive home games and tied for fourth place in the Western Conference with 13 points (Overall 3-2-4). Striker Alan Gordon has been scoring important goals for the team, scoring the equalizer and his third this season in Saturday’s game. Gordon says there isn’t much to it,

“I’m just in the right place at the right time. I don’t know what the secret is and I don’t want to say it’s all me. I’ve been lucky to get these goals and that is great. [Ishizaki] played a great ball in. For most of these goals, I don’t have to do much, just get a head on it and hope it goes in.”

That said, his teammates are glad to see his strong performances, as Zardes puts it, “Goals. Goals. Goals. Alan is on fire and he is a threat, he is a big body.”

Last season, RSL had an unbeaten streak of 13 consecutive matches at the opening. Their strong season took them into the playoffs, where they were taken out by the Galaxy. Nevertheless, RSL are unbeaten by the Galaxy at their home stadium. This, you could say, has the trappings of a fierce Western Conference rivalry. And so come Wednesday night at 6:30pm, we will see what this rivalry means to each team.