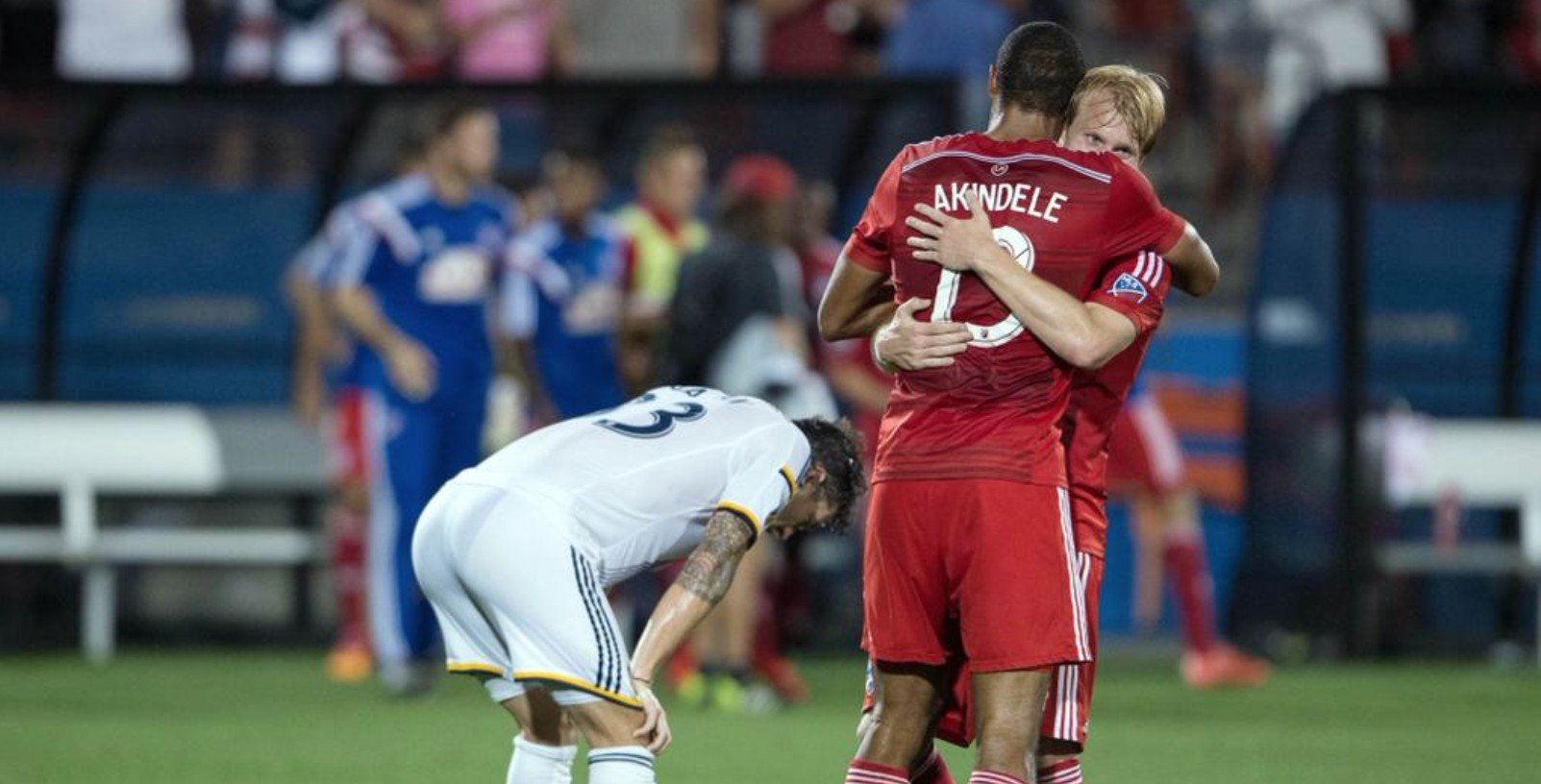 A disappointing ending to FC Dallas vs LA Galaxy leaves everyone with questions and Head Coach blaming himself.

Last night, LA Galaxy effectively fought off the attack of FC Dallas for as long as they could but it wasn’t good enough. And an unbeatable streak became what was inevitable, a 2-1 loss and the start of a lot of criticism about lack of definitive wins and questions about team depth. Phrases like stealing points, winless streaks, changing lineups and rampant injuries, describe LA Galaxy as of late. It’s a team still struggling to find a new identitiy and separate itself from the onnus of a 5 MLS Cup-donning dynasty, while still paying homage to that incredible legacy. Lacking the solid attacking leadership of Robbie Keane and depending on an ever-changing lineup due to injuries and other call-ups has taken its toll on their stability and growth. But instead of ringing an alarm bell, Bruce Arena carries on with his tough decisions – after all, that is the nature of the game: transformation, injuries, adjusting plans, adaptations and parity. Last night his starting lineup caused some confusion but given a rigorous game schedule this week, it was understandable that there’d be changes from the earlier match against RSL.

But afterwards, a humble Bruce Arena admitted there were mistakes made in preparing the team for this week’s action:  “We didn’t do well at the end of the game, the last 15 minutes or so, and that’s my responsibility. When a team plays that poorly on the road, they’re not well coached. We blew a lot of points this week. We could have walked away with maybe six points this week, instead we walk away with one, and that’s my responsibility. I have not done a good job with this team to get them tactically right at the end of games.”

“I have not done a good job with this team to get them tactically right at the end of games.” Bruce Arena, LA Galaxy Head Coach / General Manager

Actually the first half was pretty impressive compared to what most anticipated. Aside from an attempt in the 20th minute, from Gyasi Zardes, who seemed uncomfortable playing up top early on, there were limited chances for a goal for LA. Their conservative (and smart) focus on defending made it difficult for FC Dallas to work their way into the box. However, later attempts from Ryan Hollingshead and Fabian Castillo kept Penedo off his feet. Jaime Penedo’s efforts in the first half to keep a clean sheet were laudable.

In the 39th minute, newcomer from LA Galaxy II, Ignacio Maganto, netted his first career goal, but was gutted to see it called offside due to Tommy Meyer‘s unintended positioning. Nontheless Maganto’s skill and assertiveness tonight made an impression and some say, had he not been subbed for by Bradford Jamieson IV in the 2nd half, the overall outcome might have been different.

Dallas lept into aggresive posturing from the start of the second half with an ever-increasing confidence and pressure into LA’s end. However, LA Galaxy were the first on the scoreboard off a perfect set piece from Stefan Ishizaki that Zardes swiftly headed past Dan Kennedy into the net in the 59th minute. Set pieces might become the ‘new’ LA Galaxy’s preferred method of scoring – it’s not the beautiful passing style we grew accustomed to, but it’s a tactic that does win close games and they’re proving to be good at them this season.

LA didn’t take the 1-0 lead for granted, but try as they might to keep Dallas from relentlessly pushing forward, as time went on, the continued pressure burst through the Galaxy’s defenses. Then came a beautiful play from FC Dallas’ #10 Mauro Diaz in the 77th minute, that faked Juninho out, chipped the ball over LA’s defense, right into the quick feet of Blaz Perez who easily put it into the back of the net past a helpless Penedo. The game winner for Dallas came when Tesho Akindele outplayed Dan Gargan and bended a shot to the far post into the netting.

Tesho Akindele put it best when speaking about the importance of preparation… “We work on that in training every day. People only see the one in the game, but I did that 200 times this week. That is what comes of it.”

As for Dan Gargan, LA Galaxy will have to face Orlando City SC for the first time ever next weekend without him due to yellow card accumulation. The Galaxy are now 3-3-5 this season.

The general consensus is that LA put in a valiant effort for the first 77 minutes, and although the style of this team is far from cohesive I’d agree there were flashes of consistent focus and drive through the midfield. Had they maintained that compact defensive posturing, perhaps they would have seen the win. “I thought for most of the game we played very compact, and it was a whole team that defended well. We were very smart at times, when to go long, hold the ball, draw fouls, or when to foul them, and I thought in the last 15 minutes we lost that about our game. We were a little naive at times and got caught really spread out with open spaces and they are a team that will punish you with so many great, attacking players. I thought there were a lot of positives about tonight, but we have to learn how to finish that game off.” – Robbie Rogers.

“I thought there were a lot of positives about tonight, but we have to learn how to finish that game off.” Robbie Rogers, LA Galaxy defender.

Looking forward, we’ll have to see how well LA can recover from this now 4 winless game streak and poor away-game record.