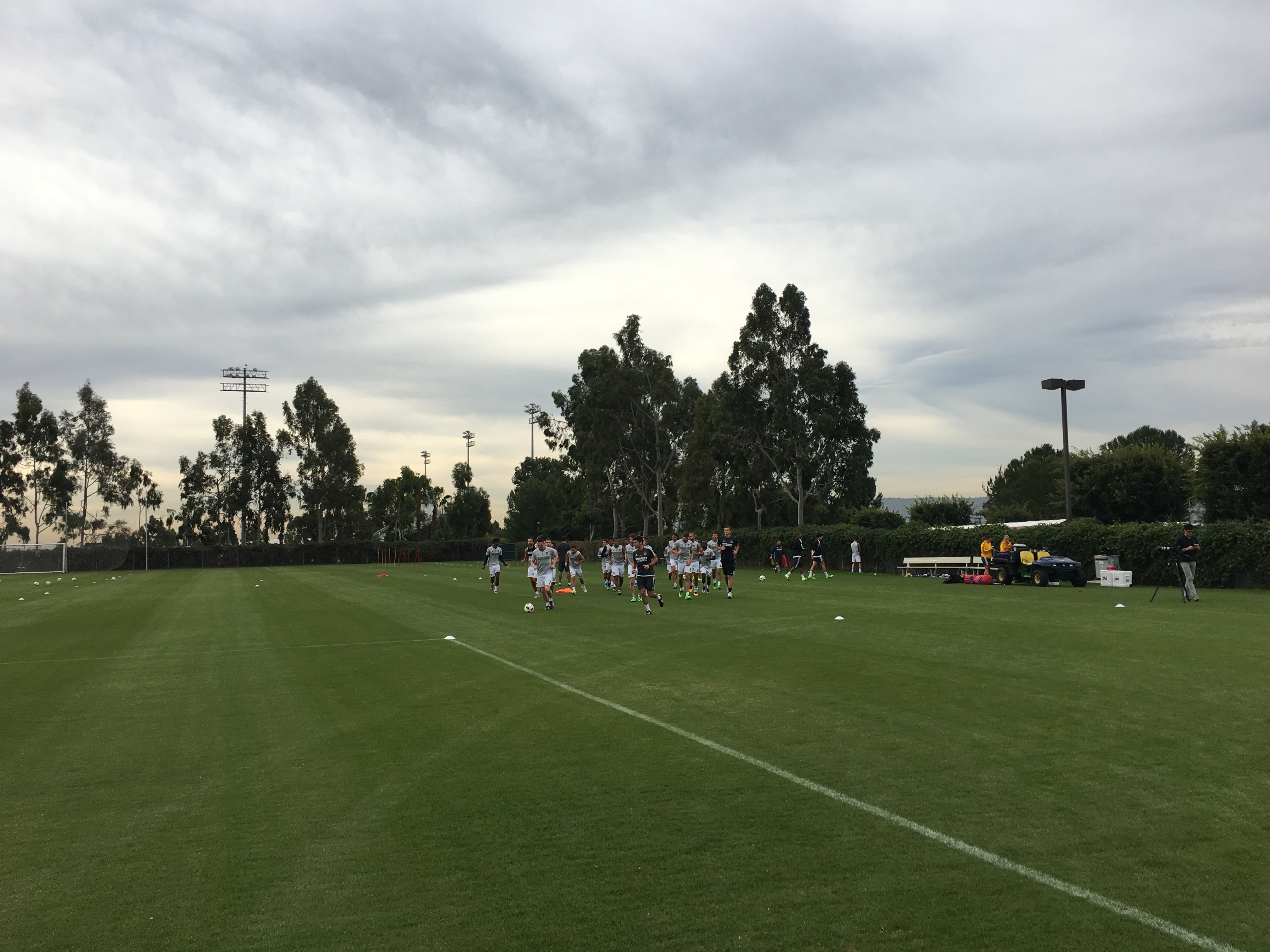 The media was invited to see the LA Galaxy train for the first time in the 2016 season. The time crunch to get ready for the CCL is officially on.

Carson, CA – The LA Galaxy held their first Media Availability of the 2016 season today so I wanted to update everyone on what I took away from the training field on a perfectly wonderful Wednesday.

The first thing that was evident is that Mike Magee is glad to be back in Los Angeles. Magee shook everyone’s hand as he came onto the training field at StubHub Center and was smiling from ear to ear. He knew recognized the familiar faces and was up-front and honest about what it felt like to be back. You can see from his quotes below, that he views this as a homecoming.

He’s not back to 100% yet, in my opinion. But, with just about a week of preseason training, who is?

Robbie Keane was also in good spirits, although, like normal, you can tell he’s laser focused on the CCL. Even during the scrimmage Keane didn’t pull any punches. He wanted 100% effort from everyone at every time. Keane wants this trophy.

All of the players were early or on-time and the practice fields look great. Although, I expect that the training fields being open (sans the fence covering) will quickly go away.

The good news for the media on this day was that the entire practice was open, including the 11 v 11, first team vs second team, full-field, 35 minute scrimmage. Complete with referees, of course.

Dan Kennedy drew the unenviable task of getting to warm up in-front of the media and he did so with LA Galaxy goalkeeping coach, Matt Reis. Reis and Kennedy went through multiple drills where he showed that it was indeed preseason and there were lots of things to work on. Bruce Arena even came over to give Kennedy a tip or two.

Players are shaking off the rust all over the field. It’s early in the preseason so no conclusions could possibly be made when considering positioning or talent.

Dan Kennedy lined up in goal. Dave Romney was positioned at Left Back, where he was clearly holding a spot for the LA Galaxy’s newest signing, Ashley Cole. Leonardo took the Center back spot next to AJ DeLaGarza. As a side note – it will be interesting to see who gets sent to the bench when Van Damme makes his way to the team. My money is on Leonardo, because you can’t afford to sit the purest natural defender in Major League Soccer, AJ DeLaGarza.

Robbie Rogers was at right back in probably the most predictable role if Cole is to lineup on the left. Rogers did still get forward in the scrimmage and was teaming up with Giovani dos Santos who was pegged in at Right Midfield. Inside of  Dos Santos was Steven Gerrard, in the more advanced midfield role, and was being backstopped by Rafael Garcia. Garcia seems to be a place holder for the rumored Nigel De Jong. But Bruce Arena had no comment about De Jong (See Quotes below).

Out at left midfield was Emmanuel Boateng, the 21 year old speedy youngster the LA Galaxy signed on the same day as Mike Magee. Boateng is probably holding the spot of Sebastian Lletget who didn’t train but could be seen walking and talking off to the side of the scrimmage.

Playing together up top in the striker roles were Mike Magee and Robbie Keane. Magee is place holding for Gyasi Zardes who’s over in US camp. However, I wouldn’t be surprised to see Magee starting up at the forward position in the future.

The scrimmage itself was hard-played by both teams. There was slide tackling, hard challenges, and 100% all-out play from both sides. This was not played like a training exercise and I think the coaching staff wants the teams used to the level of competition they expect to face. If competition breeds success the Galaxy are working in the right direction.

I’m not going to say anything really stood out, except for maybe the communication from Dan Kennedy. But the overlapping play between Rogers and Dos Santos on the right was natural and free flowing for what it’s worth.

It’s really the beginning of things for the team here. But the big takeaway is that there is training with clear focus and I don’t remember seeing an inter-squad scrimmage ever being this physical. I think that’s a good thing.

On Signing Ashley Cole and what other plans Bruce has for the team:

“We announced two additional signings this week in (Jelle) Van Damme and (Ashley) Cole. And obviously, this group (is) here and perhaps (we’ll have) another signing in a week or so.”

On if that next player is Nigel De Jong:

On how the LA Galaxy will approach the preseason game with FC Shirak:

“We’ll play two teams (45 minutes each). This is real hard for them today playing 35 minutes. We’ve only been out since Friday so it’s going to take a little time.”

On starting players that are over 30:

“He’s an experienced left back. We want to have a little bit more versatility with our outside backs and he’s certainly a player, over his career, that’s obviously been a very good defender and that can get forward into the attack. And I think that’s something we hope to utilize.”

On when Ashley Cole Will arrive:

On when Jelle Van Damme will arrive:

On what it feels like to be back at StubHub Center but playing with LA Galaxy instead of Chivas USA:

“A little different. A little the same. It feels like I’m back home, which is great. This is the best organization in the league. From top to bottom, its just been a fantastic experience so far and I’m super, super happy and excited to be here.”

On Robbie Keane calling the players in before the official start of preseason:

“It’s good. Some captains practices to get us all on the same page. Obviously, our competition starts a little bit earlier than the majority of teams in Major League Soccer so it was the right thing to do for us, to get going to make sure we’re prepared.”

On adding two defensive signings to the team in the last couple of days and what they can add to the team:

“Certainly a pedigree of play and experience and We’ll bring them in with open arms. They’re going to help the team without a doubt and that’s kind of a mark of this club – they want to make a splash and sign big name players that make a big impact on the field and they’re not going to change. It’s exciting being on the inside and being a part of that.”

“Yeah, it’s awesome. It’s comfortable, it’s obviously great competition and great people. And saying I’m happy to be back is an understatement.”

On signing as a Free Agent with the LA Galaxy and if they were his target all along:

“I don’t want to speak on Bruce’s behalf, but we met on the night of December 8th and, you know there’s obviously some hardball and some games going on, but I think, myself I was hoping I got here before December 8th, and then as of December 8th it was all but signed.”

On if the family reason he left LA for and going to Chicago are an issue now:

“No. I wouldn’t be back here then. It was crazy. Obviously I had to leave, and there were reasons for that and I took care of whatever was going on. But it’s so great to be back. I wish I could’ve gotten back a little bit sooner, but the fact that I’m here, and I’m getting healthy and happy, and bringing my family with me is everything.”