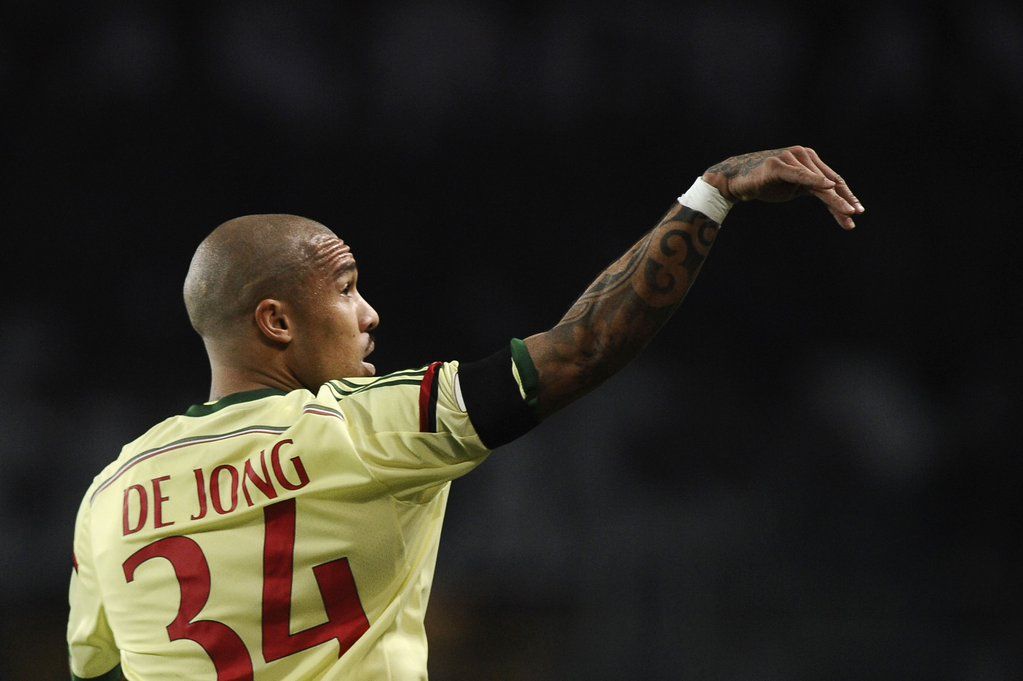 With the Recruitment of Nigel De Jong, the LA Galaxy Make Perhaps Its Biggest Signing of the 2016 Preseason

The LA Galaxy has officially completed all its pre-season signings for 2016, bringing in the physically imposing midfielder Nigel De Jong from AC Milan reportedly for $500,000.  The news was first reported by LA Times’ Kevin Baxter in a well-timed release immediately after the post-match press conference from Saturday night’s game against FC Shirak.  According to Baxter, the process by which LA Galaxy conducted all three international signings for $1.3 million is a novel approach in the league but in no way underhanded or an example of MLS bending the rules for LA Galaxy. Kevin joined our own Corner of the Galaxy host, Josh Guesman to discuss the details of the De Jong’s contract as well as the details behind Ashley Cole and Jelle Van Damme’s contract as well.

The Netherlands international has been in talks with the MLS side in recent weeks and AC Milan has agreed to terminate his contract.

“AC Milan announces that Nigel De Jong’s contract with the club has been mutually terminated,” read a statement on the club’s website. AC Milan’s CEO Adriano Galliani confirmed to Mediaset Premium late Sunday that a deal for the 31-year-old was completed before the transfer window closed.

“AC Milan communicates today that Nigel De Jong’s contract has been consentually resolved. We wish to thank De Jong for his commitment, devotion and professionalism, demonstrated while wearing the shirt of Milan and defending the Rossoneri colors and we wish him every success for the rest of his playing career.”

The Netherlands international has only made one Serie A appearance since September, he’s made only five appearances for Milan this season, and was linked with a move away from San Siro for some time. He has over 80 caps with the Netherlands National Team.

Thank you for all General @NDJ_Official and good luck for your new challenges! 🔴⚫️🍀#weareacmilan pic.twitter.com/GtVL82uUXv

Though Jelle Van Damme and Ashley Cole, the other recent signings, have not yet begun practicing and were not in the lineup at Saturday’s friendly, the match against FC Shirak proved there’s still a need to bolster the Galaxy’s defense.

De Jong’s 14-years of experience brought him from the Ajax youth academy system to his first team appearance at the age of 17 where he played both as central midfielder and right winger. At 19, he’d made his international debut with the Netherlands National team. He joined Hamburg in 2006 where his skills as a defender were honed by Huub Stevens (who brought Hamburg up from relegation zone to 7th in the Bundesliga by 2007), and then went on to Manchester City in 2009, becoming an integral holding midfielder with a penchant for on field battles that won him the nicknames, “Lawnmower” and “The Destroyer“. Remember that unfortunate incident in March 2010 that left Stuart Holden sidelined with a fractured leg back in a “friendly” between the Netherlands and USMNT? That wasn’t his only claim to infamy. In the 2010 World Cup Final, he was lucky to have avoided a red-card in connection with a reckless challenge in which he kicked Xavi Alonso in the chest. That same year in an EPL match against Newcastle, Hatem Ben Arfa was carried off the field with a double fracture of his left fibia and tibula thanks to Nigel’s talents. In spite of the rough tackles, to this day, he’s only received three red cards in his professional career. That’s fair warning – the LA Galaxy intends to seriously compete for the Cup against strong offensive teams.

This trade is more than many bargained for and an incredible value. At the current market value of 4 million Euros, in spite of the under $1 million pricetag and with the likely departure of Gerrard at the end of the season, look for De Jong to move up in the ranks from 2016 to 2017.