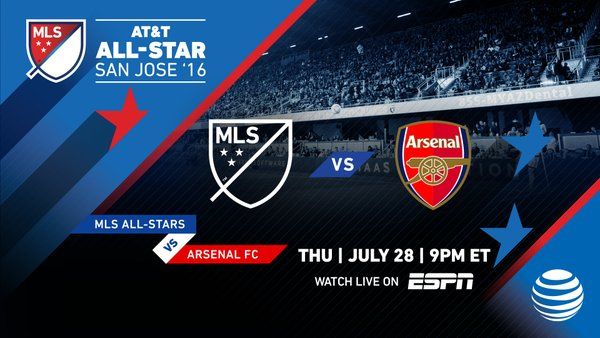 ARSENAL ARE COMING TO CALIFORNIA FOR MLS ALL-STAR GAME

Arsenal will be coming to the California with stops in San Jose (MLS All-Star Game) and Los Angeles (Club América).

North London Premier League club Arsenal F.C. is heading to America for a mini tour at the end of July. Arsenal F.C. has the same owner as the Colorado Rapids (Stan Kroenke) and carries over some other links between the club and MLS. The first stop on the tour will be in San Jose for the MLS All-Star Game on July 28th. This date is special as the MLS All-Star Game was held in San Jose 15 years ago to the day.

We have some news – @Arsenal are going back to America this summer! https://t.co/dwgWNyIc6e

Just a few days after the MLS All-Star Game Arsenal will head to Los Angeles for a Sunday game against Liga MX side, Club Deportivo Guadalajara (Chivas). The July 31st game does not have a kickoff time or tickets available for sale just yet.

Arsenal might be heading to America with a thin first team roster as COPA America ends July 4th and Euro 2016 ends on July 10th. Players on teams who make it past the first round of the tournament, I imagine, will be allowed to rest instead of trekking out for these friendlies.

It is a shame that LA Galaxy won’t be playing a friendly with Arsenal F.C. on this American Tour because that is a game I think most people would rather see than a friendly versus Chivas. We could of watched Ashley Cole reunite with his old manger Arsene Wenger. During the 2003-2004 season they were part of the most amazing team in English football history. Together they managed to go undefeated for 49 straight games including a whole regular season. Ashley Cole in defense helped them go 36-13-0 while only allowing 35 goals in the 49 games at a .71 goals allowed per game average.

Arsenal F.C. is known worldwide for its style and beautiful play that is nurtured under the watchful eye of Arsene Wenger so I recommend taking a visit out to StubHub Center that weekend even if you aren’t a huge fan of either club.