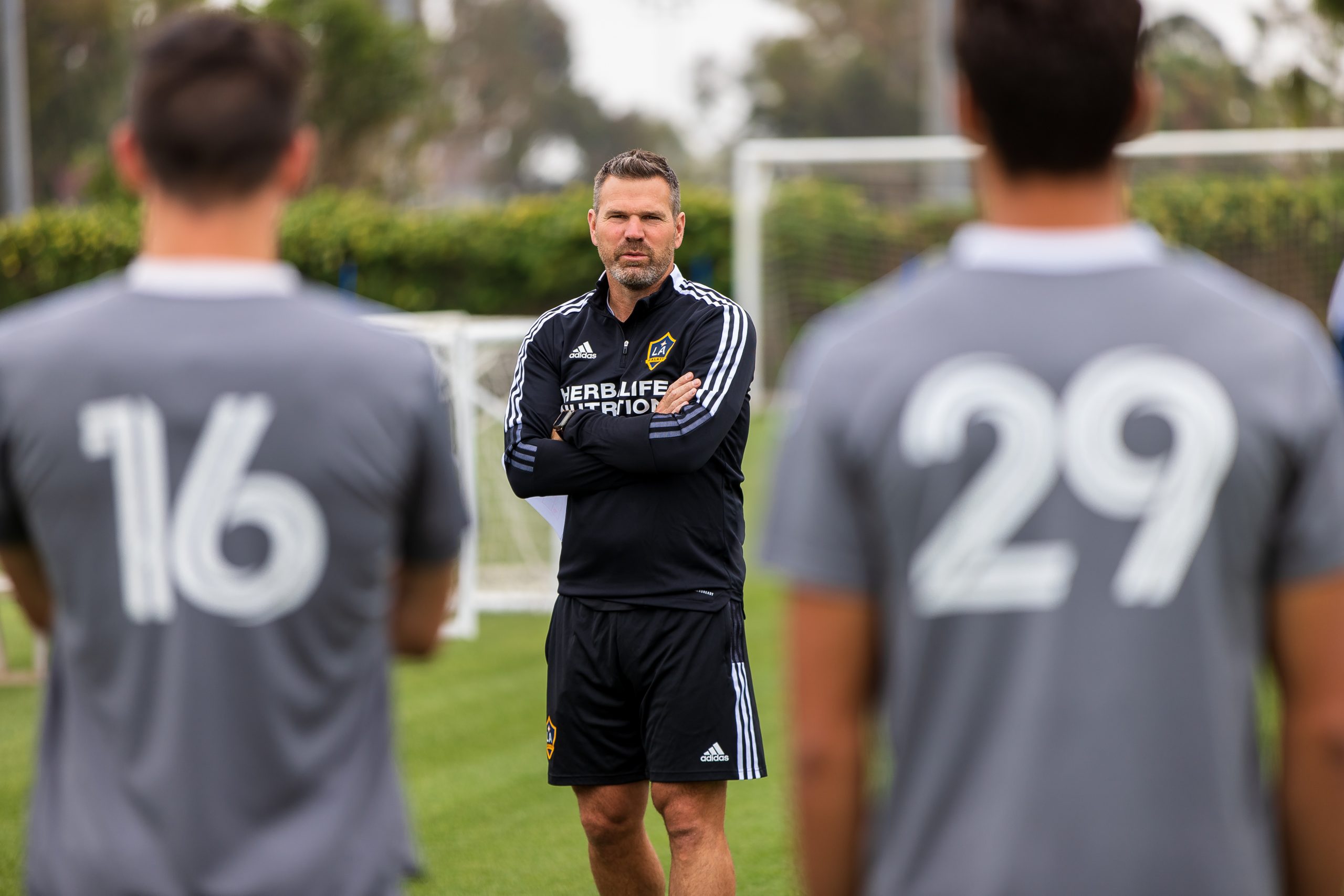 The Major League Soccer season is only four games old for the LA Galaxy, but the five-time MLS Cup champions already may have a candidate for their play of the year.

Last Saturday’s game with arch-rival LAFC barely was 11 minutes old when Galaxy central defender Derrick Williams dispossessed LAFC’s Jose Cifuentes with a perfectly executed sliding tackle with his left foot that sent the ball to Javier “Chicharito” Hernandez, who went on to score in the Galaxy’s 2-1 victory at Dignity Health Sports Park.

Williams said such a play was nothing new for the Irish international who joined the Galaxy in early March.

“I like to let the (opposing) forwards know they’re not going to have an easy game. I like to be physical,” he told reporters as he and the Galaxy prepared for Saturday’s game at DHSP against new franchise Austin FC (12:30 p.m., Univision).

“I’m still not fully match-fit just yet, so there’s a couple of I kind of missed,” he went on with a laugh.

Williams, now fully recovered from quadriceps surgery in December, made his MLS debut with a 45-minute stint against Seattle on May 2. He said he had only one objective in last weekend’s impressive play.

“I just tried to win the ball,” he said. “I literally just made the tackle and lucky enough it went to Chich(arito) and he does what he does best. He puts it away.

“I try to talk to him as much as I can. That’s one thing I want to make sure I do is try to be a leader at the back … organizing. We can’t be conceding two goals a game. I don’t think that’s nowhere good enough.

“That’s one of my goals throughout the season,” he added, “just to get a lot more shutouts as a team and defend better.”

The Galaxy’s back line appears to be in good hands with the 28-year-old who played professionally in England since 2011 and has represented the Republic of Ireland on youth and senior teams. Williams, who signed a two-year contract with a one-year option, already has made quite an impression on Galaxy head coach Greg Vanney, who said the team had been “keeping an eye on him” for a couple of years. What made Williams a particularly attractive option at central defense was the fact he holds an American passport and does not occupy an international roster spot.

The Galaxy acquired his discovery rights from D.C. United for $125,000 in general allocation money.

“What I like from him,” Vanney said, “is he’s a powerful, strong defender who is a communicator. He’s an organizer, he’s a talker, he has a presence on the back line. I like having a left-footed player on the left side of our back line because it gives us balance. There’s not a ton of those out there.

“When we got him here he was coming off a quad surgery and we needed him to get healthy, to get him fit. We wanted to take our time throughout that process.

“I suspect he’ll keep getting better as things go.”

Williams said he’s already been impressed with the level of play in MLS.

“Whenever I go away with the Ireland team, we always look at the other teams, and the more I go away the more MLS players I see on their squads,” he said. “I know there were a lot of international players here and the standard was a lot better than what people make it out to be.

“So I kind of expected it to be decent, and it definitely is. I definitely didn’t take it for granted.”

The Galaxy’s Julian Araujo admitted he wasn’t at his best when he returned from the United States’ ill-fated attempt to qualify for this year’s Olympics in Tokyo.

But the right back’s performance in last Saturday’s victory over LAFC — Vanney said it was “the best second half he’s had this year” — may have been just what he needed.

“Coming back from the Olympics (qualifying) was very difficult for me,” he said. “The preseason in Arizona I felt a little rusty. I wasn’t as confident as I wanted to feel coming back with the squad. I know the first couple games this season I wasn’t at my best, and I feel like I needed the LAFC game.

“I feel like these coaches have helped me a lot to learn my position and just given me a lot of confidence. I feel very good. I know what my role is and they make it very clear for me and what they want from me.

“I want to continue to keep my performances at a high standard and I just want to keep it going.”

Vanney said the 19-year-old from Lompoc has a promising future, to say the least.

“His physical capacity is just off the charts,” he said. “Between his capacity to repeat these long runs, these attacking runs and still recover. His ability to do that at high speed. He’s got an incredible amount of speed to go. He has an aggressive personality and he wants to make things happen.

“He’s still a young player who we want to get his priorities in the right places and at the right moments, which is what we’re trying to do with him. Right now we’ve really emphasized the defensive side and getting him sharper and focusing on being a great defender.

“I still see him as a young man with an incredible upside.”

— Kevin Cabral, recently signed to a five-year contract as a young designated player, could make his long-awaited debut Saturday.

The Frenchman, whose discovery rights were acquired from FC Cincinnati for $250,000 in general allocation money and a first-round pick in the 2022 MLS SuperDraft, has been training with the team this week and Vanney is hopeful he will be available to play against Austin FC.

“The profile of what we saw as a player is he’s very good on the move, he picks up the ball quickly, he combines well, he’s always organizing and looking to finish attacks,” Vanney said of the 21-year-old winger, late of Valenciennes FC. “He’s a player that once he gets on the move he wastes no steps. Everything is fluid and it’s graceful.

“He’s still a young player and we still want to introduce him the right way to the league and to our team so he’s clear in understanding what we’re trying to do. But loads of talent. Just a different level of speed in terms of game-breaking, opening up an opposition, getting behind, playing in transition, the kinds of things that give us a whole other dimension that we haven’t really had just yet.”

— The Galaxy continue to play a waiting game on another Frenchman, central defender Sega Coulibaly.

“These Visa processes are killing me,” Vanney said. “He has the approval, we’re working on the appointment, and hopefully we’ll get that sooner rather than later and hopefully things will turn around faster than they did with Kevin.

“I hope we’ll see him here early next week, but there’s no promises on that.”

— In injury news, the status Victor Vazquez remains unclear. The midfielder, who joined the team in mid-March, suffered a groin injury in the loss to Seattle and missed the victory over LAFC. Vanney said the veteran “has worked through progressions this week.”

“We’ll have a better sense tomorrow to see if he’s ready for the weekend,” he said. “He did train with the group today. He is taking the right steps forward.”

Right back O’Niel Fisher, battling a groin strain, also has been making progress, according to Vanney.

“We’ll just see where he’s at,” said Vanney, who added everyone else should be ready to go Saturday.