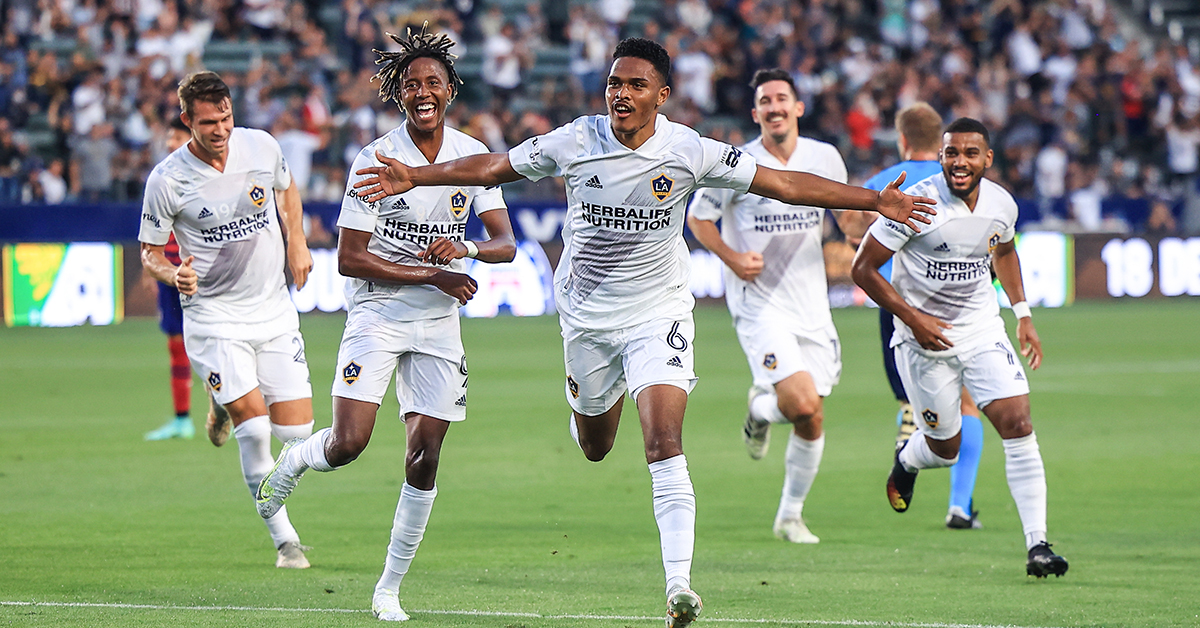 Any questions concerning one of the LA Galaxy’s newest acquisitions, holding midfielder Rayan Raveloson, have been answered emphatically. And quickly, too.

All he’s done since arriving in Southern California from France at the end of June and having not even a week of training with his new club is play two games — going the full 90 minutes each time — and scoring his first goal in a 3-1 victory over FC Dallas on July 7.

To say the 24-year-old has been a quick study is putting it mildly. He even had to make one of his starts at center back because of Sega Coulibaly’s strained abductor injury.

“He’s what we’ve always seen with him when we’re watching him. He’s an outstanding soccer player, very versatile,” Galaxy head coach Greg Vanney said as he prepared his club for Saturday’s clash with the Vancouver Whitecaps at Rio Tinto Stadium in Sandy, Utah (7 p.m., Spectrum SportsNet). It’s the first game of a three-game road trip that includes games against Real Salt Lake on Wednesday, July 21 at Rio Tinto and Friday, July 30 against FC Dallas at Toyota Stadium in Frisco, Texas. “He can play in the center back position for us. In an ideal world he’s that defensive, holding midfielder that we need.

“He’s someone that’s very aware of his surroundings. He knows when to move, clear space for other people, he knows when to get the ball for himself, he knows what his solutions are. In his last game in the center back position when he was facing forward you see his ability to play balls between lines and disguise his passing.

“It also will free us up to possibly push Jona (Jonathan dos Santos) a little higher, free him up to do a little more back and forth,” Vanney continued. “He’s a very, very good soccer player with good, physical capacity and gives us a lot of versatility in our group. In our vision of what we want to do he’s kind of a piece that we’ve been looking to bring into the team that will help free up some other guys on the attacking side of things.”

Raveloson, speaking with reporters on Thursday, revealed he had options to continue his playing career in Europe but “the best choice for me was to join the Galaxy.”

“I understood Major League Soccer is a very good league,” he said. “That’s why I came here. It’s a league that’s improving and I want to be part of it.”

He said having French-speaking teammates such as Coulibaly, Kevin Cabral, and Samuel Grandsir have helped ease his transition to the five-time MLS Cup champions, but there have been an obstacle or two along the way.

“Maybe it’s a bit tougher to find a house here,” he said with a grin. “I’ve made the effort to adapt myself and it’s gone well.”

Vanney couldn’t be happier with the 6-foot, 161-pounder.

“He’s a cerebral player. He’s very clever and aware of his surroundings,” he said. “He’s processing the game pretty fast and his awareness level is high to where he’s been able to adapt quickly.

“He’s still getting fit. Before he played the last game he said he was about 60 percent where he’d like to be. If that’s 60, we look forward to what 100 can look like.

“We’re excited about what he brings to the equation,” Vanney went on. “He’s a really good guy … peaceful, humble and just comes to work every day. He’s been a joy to have.”

It was just over a week ago that the Galaxy signed one of their best young players, Julian Araujo, to a multi-year contract extension.

Another one of their talented prospects, Efrain Alvarez, on Thursday signed a two-year contract extension through the end of the 2023 regular season with a club option for 2024. The 19-year-old Alvarez will occupy an MLS U-22 initiative roster spot.

In four seasons with the Galaxy, the midfielder has four goals and five assists in 41 games (18 starts) across all competitions. Vanney called him a young man “with loads of talent.”

“He’s a difference-making player,” he added. “Even though he’s young, he has incredible vision. It’s really outstanding for us to have a young man come through the (Galaxy) academy with as much ability as he has.

“At some point,” he continued, “there’s going to be a time and a place and an opportunity for him probably to do something somewhere else, hopefully at a high level, whatever makes sense. He’s really committed to the professional side and the work that it’s taking to build a career.

“It’s been nice to see. We’re excited to see he’s going to be sticking around for a bit. He’s really going to impact games as he continues to play with us.”

Javier “Chicharito” Hernandez, nursing a strained calf, will not be available for Saturday’s game. Vanney wouldn’t get his hopes up for the following two games, either.

“Javier is still in return to play,” he said. “There is some hope that we’ll see him in the course of the week, whether that’s Wednesday or Saturday. We’re trying to progress him along and see where that’s at. From our mind set we’re trying to push him along without rushing him.

“Wednesday I would say is questionable. We’re hoping Saturday is a lot more probable. I won’t really know until he starts crossing some of the thresholds that we want in his return to play.”

Coulibaly also is out for this weekend, and Danilo Acosta (stress reaction in his foot) is questionable. Center back Dan Steres, sidelined with a hamstring injury suffered eight minutes into a 2-1 loss to Seattle on June 19, is back in training.

Saturday could mark the long-awaited return of center back Derrick Williams, who has finished the six-game suspension he received for his brutal tackle of Portland’s Andy Polo on May 22. Polo underwent surgery to repair a ruptured right quadriceps muscle and torn meniscus and is out for the season.

Vanney said Williams “is ready to get back out there and play.”

“Physically, he’s good,” Vanney said of the Irish international. “The only thing he hasn’t done is play 90 minutes. In terms of 90 minutes of match fitness he’s going to have to get a couple of games under his belt to really get there. I’m sure he can manage his way through it just fine.

“Mentally, I think early on there were some challenges for him and it impacted him a lot more. As time wore on, like most things, you kind of move on and he’s excited and anxious to get back on the field and try to help the team and do his job.”

The popular Apple TV+ series “Ted Lasso” returns for its second season on July 23, and Vanney said he still hasn’t watched any of season one. Not that he’s gone out of way to avoid doing so.

“Between the Euros, Copa America and now the Gold Cup and watching us and our opponents, I haven’t watched much TV outside of soccer,” he sheepishly admitted. “But I will. I will.”