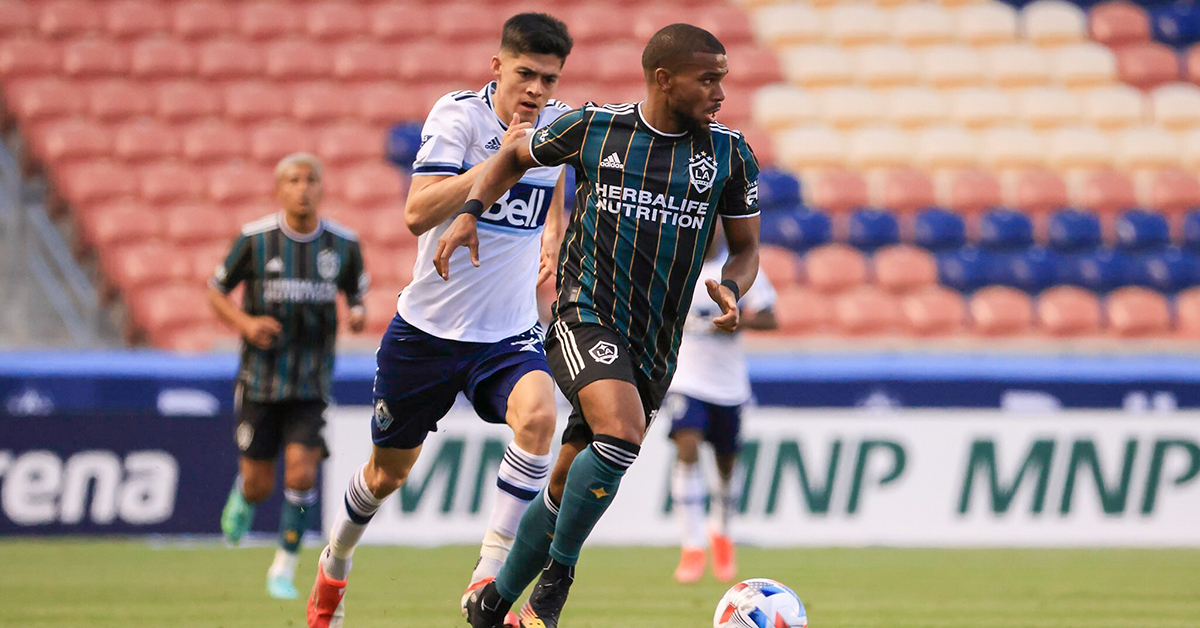 Galaxy effort falls flat on the road against vancouver

The LA Galaxy can’t find rhythm in a game that was probably coming too easy for them in the first 45 minutes in a loss to Vancouver.

The LA Galaxy suffered through their worst performance of 2021 when they allowed a two-goal second-half from the last place Vancouver Whitecaps on Saturday night in Sandy, Utah.

It was a game that saw the Galaxy create some offense in the first half and even took an early lead in the 5th-minute when Rayan Raveloson buried his second goal of the year and his second goal in as many games. It seemed like the Galaxy would be able to walk through this game without having to expend too much energy.

But the effort across 90-minutes wasn’t there. And it’s something that Greg Vanney honed in on immediately.

“I thought our intensity was good for about 30 minutes,” Vanney said after the game. “Again, I thought once we scored the first goal, with respect to the opposition, it was a pretty easily scored goal. And then the second goal, we score that gets called back again, it feels like it’s one that we score pretty easily. And I think the group feels like all these opportunities are gonna come left and right. That if we keep hitting the final pass, they’re going to give us the space and we didn’t connect on a lot of those. And over time at altitude, at heat, we haven’t played in 10 days, we keep turning over the ball, those kinds of things just, they turn against you over time. All the little mistakes, losses of possession, we get bullied off the ball or just lose things. Again, those things cost you over 90 minutes. That’s why the game isn’t 20 minutes long, it’s 90 minutes, and every decision matters over the course of 90 minutes.”

And as Vanney had warned, the Galaxy showed some signs of weakness as the half marched on, and despite keeping the Whitecaps from registering a shot on goal in the first 45-minutes, half-dangerous chances started to show up for the home team. And those chances would be capitalized on in the second half.

The first goal of the comeback fell favorably to Vancouver in the 48th minute. That’s when a hopeful cross could only be half-cleared by Derrick Williams. The ball fell to the feet of Javain Brown, who fired in a dangerous cross from the right side forced goalkeeper Jonathan Bond to come out and meet it. His deflection fell right to the feet of Déiber Caicedo, who blasted the ball past a couple of defenders and past Bond.

But the real heartbreaker for the Galaxy, and the play sure to be on most highlight packages, was when Cristian Dajome faked out three Galaxy defenders in the box and casually cut the ball back to score in the 77th minute. Dajome took Nick DePuy, Derrick Williams, and Jorge Villafaña out of the play in one little move while going to his left, slammed on the brakes, and went right to bury the ball.

The entire sequence looked more akin to pee-wee soccer than the professional ranks, and during the play, the Galaxy outnumbered the Whitecaps attackers five to three.

Vanney knew he was shorthanded on the night, and as good as the younger players have played this season, they couldn’t be asked to claw the Galaxy back into the game. And it was a game the Galaxy looked disjointed in, the passing was rushed or too slow, and the offensive threat fizzled the more the clock ticked.

The Galaxy managed only two shots on goal for the entire game, with both coming in the first half. And while Vanney says the second-half collapse wasn’t indicative of this club, the team has had a habit of conceding more shots in the second half than in the first.

The Galaxy won’t have much time to lick their wounds as they’ll return to the same field on Wednesday night, where they’ll once again be visitors to Real Salt Lake in front of their home fans.

But the opportunity is now gone. With a win, the Galaxy would have taken over sole possession of second place from Sporting KC, who was off this weekend. And while the Galaxy remain in third place in the Western Conference, there should be a real hit to their confidence.

Especially when the team looks back on a second goal that would have put Vancouver in a much more dire position in the 27th minute of the match. But striker Ethan Zubak, who scored in the Galaxy’s last game against FC Dallas, was a half step offside once VAR looked at the goal he scored – a near inexcusable place to be when there was relatively no pressure coming from Vancouver and plenty of space to finish that shot.

Even a 37th-minute strike of the crossbar seemed almost too easy as Samuel Grandsir found the woodwork unkind to him for the second game in a row.

And the Galaxy will now need to worry about injury concerns to Raveloson who left the game in the second half after getting cramping in both of his calves, but complaining of some tightness in one of them at halftime. Samuel Grandsir also took a hard challenge and needed to be subbed in the second half as well. The Galaxy didn’t immediately release any information about his injury.

“With our group, and with guys away, over 90 minutes, we have some young guys who are good and they give us good minutes, but we can’t expect them to come in and change the game and go win a game for us,” Vanney said of the five players away on international duty and the still lingering injuries.” And to do that, it’s the guys who start the game have to make sure that the game is in a good position down the stretch for us to win the game. And give the guys we bring on the best chance to see the game out and all that. We have to do that right now. That’s the way it is.

“And you know, maybe in the future with everybody here,” he continued, “we have more impactful players who when they come on, we can really change the trajectory of the game and do a lot of those things. But with respect to our young guys who have been incredible for us, it’s a big ask for them to have to do that on the road time and time again. It just can’t happen. So that’s for me is a bit of the where we’re at tonight. And I don’t think it’s been the the M.O. of the team. I just think tonight I thought we got casual because we thought the game was going to be easier than it ultimately did. And it costs us.”

But where once nine points seemed something tangible to shoot for on their three-game road trip, a loss to the now second-worst team in the conference might make them question the remaining two games as they sweat it out for another four days in Utah.