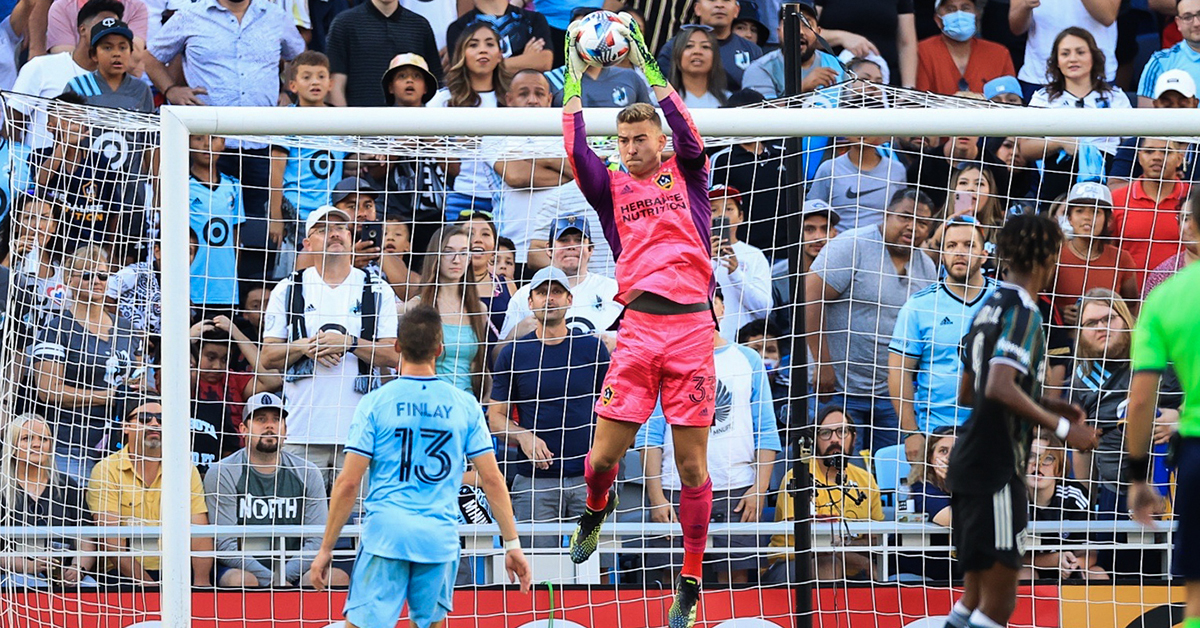 Klinsmann earns his keep with the Galaxy

Goalkeeper Jonathan Klinsmann dazzles in a seven-save shutout. Puts Galaxy at top of the table for brief moment in time.

The 24-year-old was told late in the week he was going to start in Saturday’s game against Minnesota United FC at Allianz Field in St. Paul, Minn., and kept the news to himself. He didn’t even inform his father Jurgen, the former head coach of the U.S. men’s national team.

“I still haven’t talked to anyone, so my dad’s probably (angry),” he said with a grin after his brilliant, seven-save performance spearheaded the Galaxy’s 1-0 victory. “I just kind of took it and had tunnel vision … ‘I’ve got to play well, I’ve got to play well.’

No kidding. Klinsmann, taking over for regular netminder Jonathan Bond, was getting his first-regular season start since Oct. 28, 2020, when he allowed five goals in a 5-2 loss to the Portland Timbers. But nothing got past him Saturday.

He was sharp from the beginning, with his one-handed save on a redirect by Ethan Finlay in the fourth minute denying an early Loons scoring opportunity. He also was up to the task in stoppage time of the second half, when he denied dangerous scoring attempts by Juan Agudelo and Chase Gaspar, the latter a deflection Klinsmann barely turned away.

“It means everything,” Klinsmann, who joined the Galaxy in August of 2020 from Swiss Super League club St. Gallen, said of his performance in place of Bond, who had started the previous 18 games. “I know it’s not going to be easy; Bondy’s been doing great. We’re pushing each other every training session, he’s made me a better goalkeeper and hopefully, I’ve made him a better goalkeeper.

“For me, it was just waiting for this chance and taking it. I’m happy to help the team. That’s all you can really ask for, to pick up those three points away from home and come home and start this tough week now. It was a fun game and nice to be out there.”

“He’s looked sharp in training,” Vanney said. “Normally in a normal season you have Cup games, you have different things where you want to keep everybody, specifically your second goalkeeper, ready. He’s been working hard and doing everything we’ve asked.

“Bondy had the 17, 18 games prior and it was an opportunity to give this kid who’s working hard every day to go out and perform, and he did. He proved today he’s ready for whatever role we give him. He was outstanding and made some incredibly athletic saves through the course of the game. We don’t come away with those points without the performance he had.

“I’m incredibly proud of him because he’s remained focused and working hard,” Vanney continued. “He’s a confident young man and he got in there and he showed that he has good reason to be.”

Klinsmann may not be getting much playing time this season, with Bond proving to be a dependable performer guarding the net, but he has welcomed the presence of the Englishman who is in his first year with the Galaxy.

“It’s always good to have competition,” Klinsmann said. “I think we’ve been beneficial for each other, as well as the other keepers in the group. I think we’ve all improved.

“Obviously my goal is not to be on the bench anymore. I hope I did as much as I could today to just keep going forward and hopefully take that starting spot.”