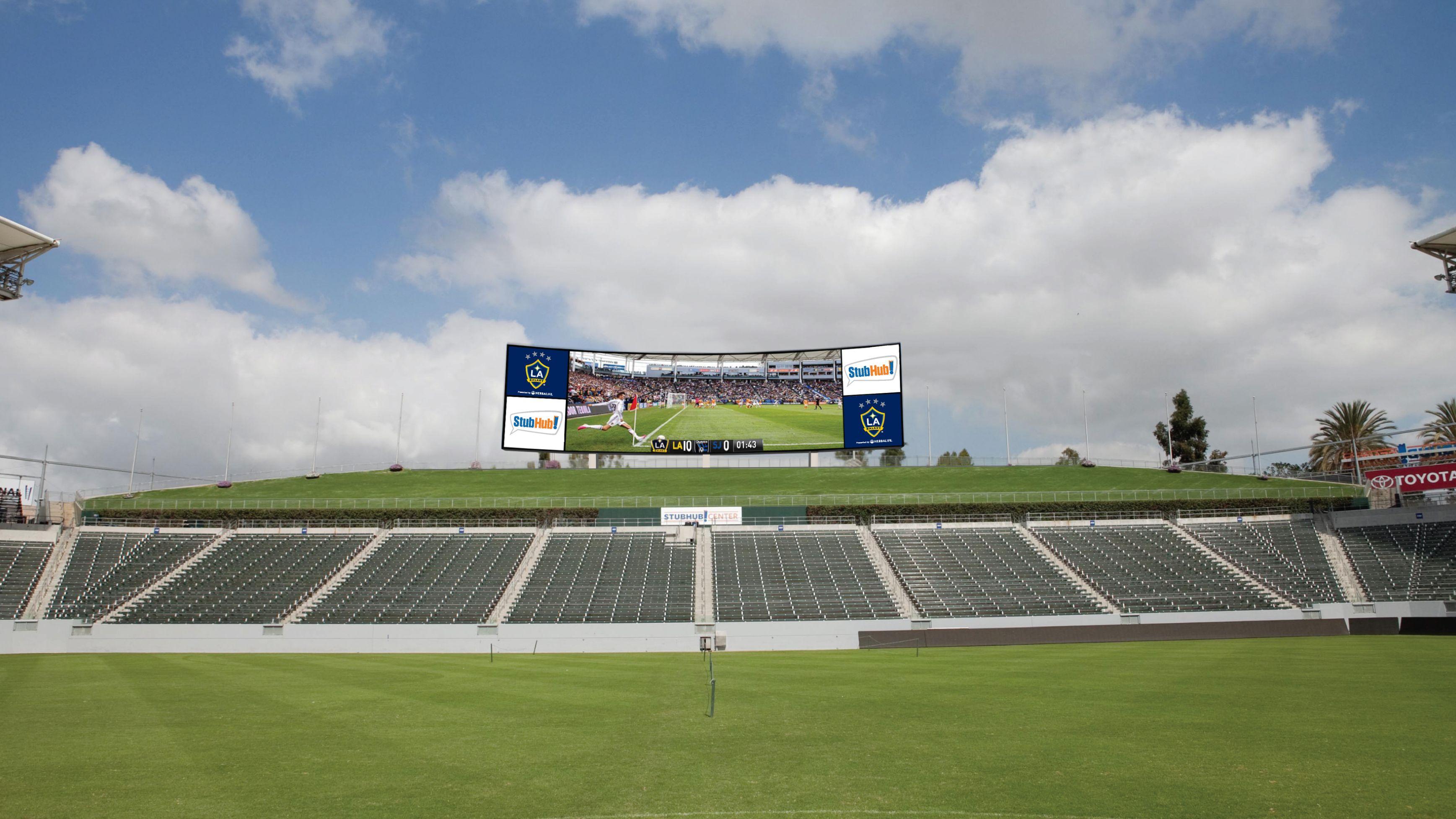 LA GALAXY AND AEG TO INVEST $15 MILLION IN STUBHUB CENTER

Carson, CA – The LA Galaxy and owner AEG announced today that they would be investing $15 million in facility improvements to StubHub Center. The most visible item of the renovation will be a 5,100 square foot LED video board that will be the largest video board in Major League Soccer. The video board will be built above the berm on the North side of the stadium, replacing the current, barely visible, video board that has had fans complaining for the last five years.

In addition, dedicated locker rooms for LA Galaxy II, and the LA Galaxy Academy (U-14, U-16 and U-18) will be built. Treatment rooms, training facilities, and fields will also be added for the lower levels of the team raising the Galaxy’s commitment to their developmental programs to levels unseen in MLS.

“Our Company philosophy is to reinvest in our core assets and these improvements will help to maintain the StubHub Center’s status as one of the best and most state-of-the-art facilities in North America.” Dan Beckman, President and CEO of AEG

The LA Galaxy and AEG have really gotten behind StubHub Center with this investment. When you think that the entire facility was originally built for $150 million, the $15 million that is being spent is a significant amount.

The video board will be the the most talked about addition, and it should be. This screen will be huge. It will be a welcomed technology enhancement and it will, apparently, knock Real Salt Lakes video board (4,200 Square Feet) into the “second largest” category (think they had to go back to the drawing board once they found out how big RSL’s video board was going to be).

The facilities for LA Galaxy II and LA Galaxy Academy are huge steps towards continuing the growth of those programs. These will continue to be additional tools that will allow the Galaxy to retain and recruit the very best talent in Southern California. Do not underestimate the effect this will have on the future of the LA Galaxy at all levels!

“These additional resources and investments speak to Mr. Anschutz’s and AEG’s continued commitment to the Galaxy, our first team, our facility, our player development program, and our fans” Chris Klein, President of LA Galaxy

It’s also pretty impressive that this investment comes after the LA Galaxy have reduced the average 2015 season ticket price by 14%. So you’re getting a lot of bang without having to fork out more money. For AEG, that’s pretty outstanding.

How can there possibly be bad news about a $15 million cash dump into StubHub Center? Stay with me.

Are you worried about the future 2nd team in Los Angeles? You should be. No deal has been announced, and we’re all fairly certain that Chivas USA will be disbanded at the end of the season and start fresh a couple of years from now, but where will they choose to base their team? If it’s closer to Downtown Los Angeles (DTLA) then be prepared for a turf war.

Let’s face it, Carson is not the easiest place to get to. There is relatively horrible public transportation, and it seems to be “a drive” for anyone who goes there. And as we’ve seen in MLS, the stadiums that seem to do the best are those located within the city they’re representing.

Now the LA Galaxy have bucked that trend by filling a large stadium with over 20,000 people on a regular basis. But what would happen if the 2nd LA team gets a stadium that is more centrally located to an area of LA that fits that “Downtown” feeling?

So the bad news, for those of you thinking Carson is the wrong place for the LA Galaxy to remain, is that the Galaxy and AEG just pushed their flag deeper into Carson. They’re committed to improving the facilities and making this the permanent and, for the foreseeable future, ceremonial home for the LA Galaxy. So you put those “Downtown Stadium” dreams away – for at least another seven or eight years.

The money is a welcome addition to a facility that has been showing it’s age. And while AEG and the LA Galaxy have laid out most of their expenditures in press releases, don’t you think there’s some room for some additional improvements? Whats the biggest item that’s now going to missing? Well I have some ideas.

Wifi – I don’t know about you, but my signal is horrible inside StubHub. So why not give everyone Wifi? It’s being done at stadiums across the country, so it’s hardy reinventing the wheel.

Food – The food at StubHub is not good. Rock & Brews has great tasting food, but who can afford it? Anything else from the concession stand is risky. The only thing that really stands out is the Bacon Wrapped Hotdogs outside the gates. Why can’t I get those inside the gates? Stadium food is alway difficult but the San Diego Padres seem to manage with good food and great beer. StubHub Center can do the same.

Seating – The fans who have front row seats at StubHub Center sit at least 20 yards off the actual field. Have you seen Red Bull Arena or Sporting Park? Those fans can almost slide tackle players they’re so close. StubHub Center wasn’t set up for it, but if I creating a wish list, then moving the seats closer to the field is a must.

Bars – Sporting KC has a great place where they can go (everyone, not just special VIPs) to have a brew at the game. And while StubHub has many bars and private clubs, there is nothing that the average fan can call “home.” Wouldn’t you like to have viewing parties at the Stadium when the team is away? Wouldn’t you like to have a bar with a view of that giant new video board to watch the Galaxy trash Seattle? Again, It’s a big wishlist item, but I want it. Give us a place to go even when there isn’t a game on the field. Give us a place to celebrate with our LA Galaxy family. And make it open to more people than those “on the list.”

Did I miss something? Then fill up the comments or hit us up on Twitter. We’d love to know your thoughts on anything that was said above.