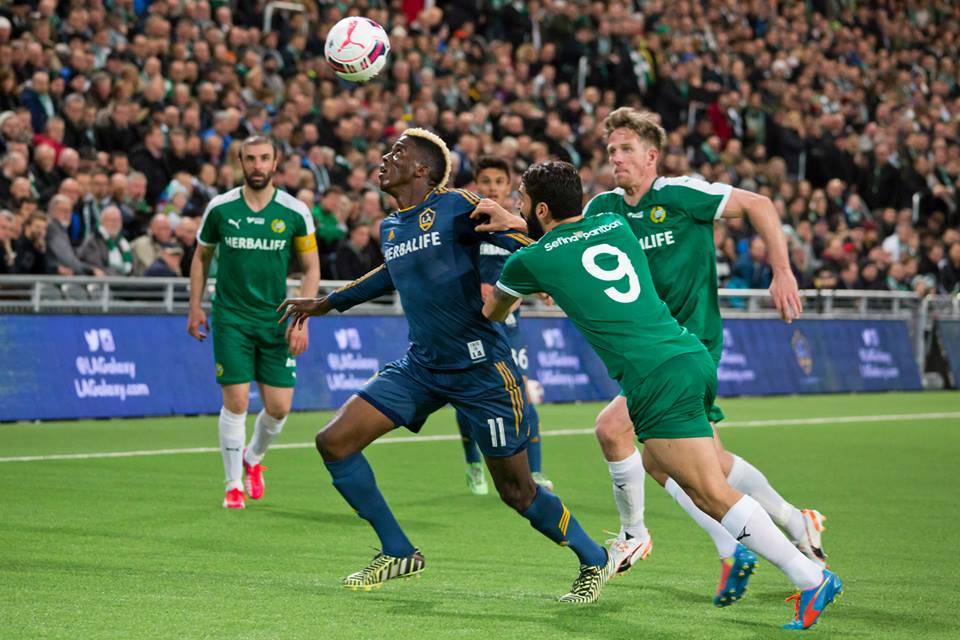 The LA Galaxy fell to recently promoted Hammarby IF Monday at Tele2 Arena in Stockholm, Sweden, 2-1.

The game started quickly in the 7th minute with a chance inside the box. Gyasi Zardes, was prepping to fire a shot when he was clipped from behind — forcing the match official to award a penalty. Robbie Keane, who had trouble converting penalties in 2014, slotted to the bottom left corner to give the LA Galaxy an early lead.

Shortly after, in the 11th minute, a poorly cleared ball by Omar Gonzalez gave Erik Isrealsson the opportunity to send a left volley shot past the outstretched arms of Jaime Penedo, leveling the match at ones.

Throughout the first half both sides produced good chances. Gyasi Zardes nearly gave the LA Galaxy the lead when he had a one-on-one chance that just barely missed the post. Hammarby also had a great chance of their own as Mans Sodervist chipped Jaime Penedo in the box. But the hustle of Robbie Rogers saved the day and cleared it off the line for the Galaxy to preserve the 1-1 tie going into the break.

The first half produced lots of good attacking soccer from the Galaxy and they looked dangerous on numerous occasions. It’s a positive sign to see from a team that needs to be moving closer to season-ready form.

However, immediately after the start to the 2nd half Linus Hallenius nodded home a slow-moving cross to give Hammarby the lead. It was a loose effort by Robbie Rogers whose mark had wandered ever so slightly away from him. The ball took a slight deflection from Penedo, but he couldn’t do enough to prevent Hammarby from holding the lead.

Of course it isn’t soccer without some controversy — even in a preseason friendly. In the 55th minute, after Linus Hallenius had broken free, Juninho ran 60 yards to track him down. Just outside the box Juninho nudged him ever so slightly, which triggered an “Oscar-worthy” diving job. Juninho was awarded a red card and sent packing. In a friendly like this you’d like to see the ref’s cards stay pocketed – but if it was a foul, a card was unavoidable.

Throughout the match there was plenty of physical play by both teams. However, by the 79th minute, Head Coach Bruce Arena sent in a reserve team with many young guns and trialists (Edson Buddle and Mike Vayrynen) who’d been pushing a quickening pace in the LA Galaxy attacks.

In the end it wasn’t enough. Despite numerous missed chances the Galaxy were unable to put the ball in the back of the net from the run of play. And after the Juninho red card, it was a game in name only. Conditioning was achieved, but meaningful match minutes were wasted by the 10-man affair.

The LA Galaxy came out and performed well. Being the first official match after three weeks of training, they looked like a club still working out the kinks and tightening screws. I really enjoyed the midfield pairing of Ishizaki and Juninho, as I felt they had a strong partnership in the middle. Zardes continued to impress and showed wellt. Keano was being Keano, being the world class forward he is.

In my eyes the defense wasn’t as strong as it can be — but without AJ DeLaGarza, who was still nursing a bone bruise, as well as Dan Gargan who himself was nursing a minor injury suffered in training, it’s hard to expect the rock-solid back line we’re accustomed to. Rookie Nacho Maganto came on and showed his talents and excited many. And I was very impressed with LA Galaxy Academy products, Bradford Jamieson IV, who started at the left mid, and Jose Villareal.

The LA Galaxy will fly back to their training base in Dublin, Ireland to rest up before their anticipated friendly vs Shamrock Rovers on Saturday at 8 AM PT, 4 PM local.