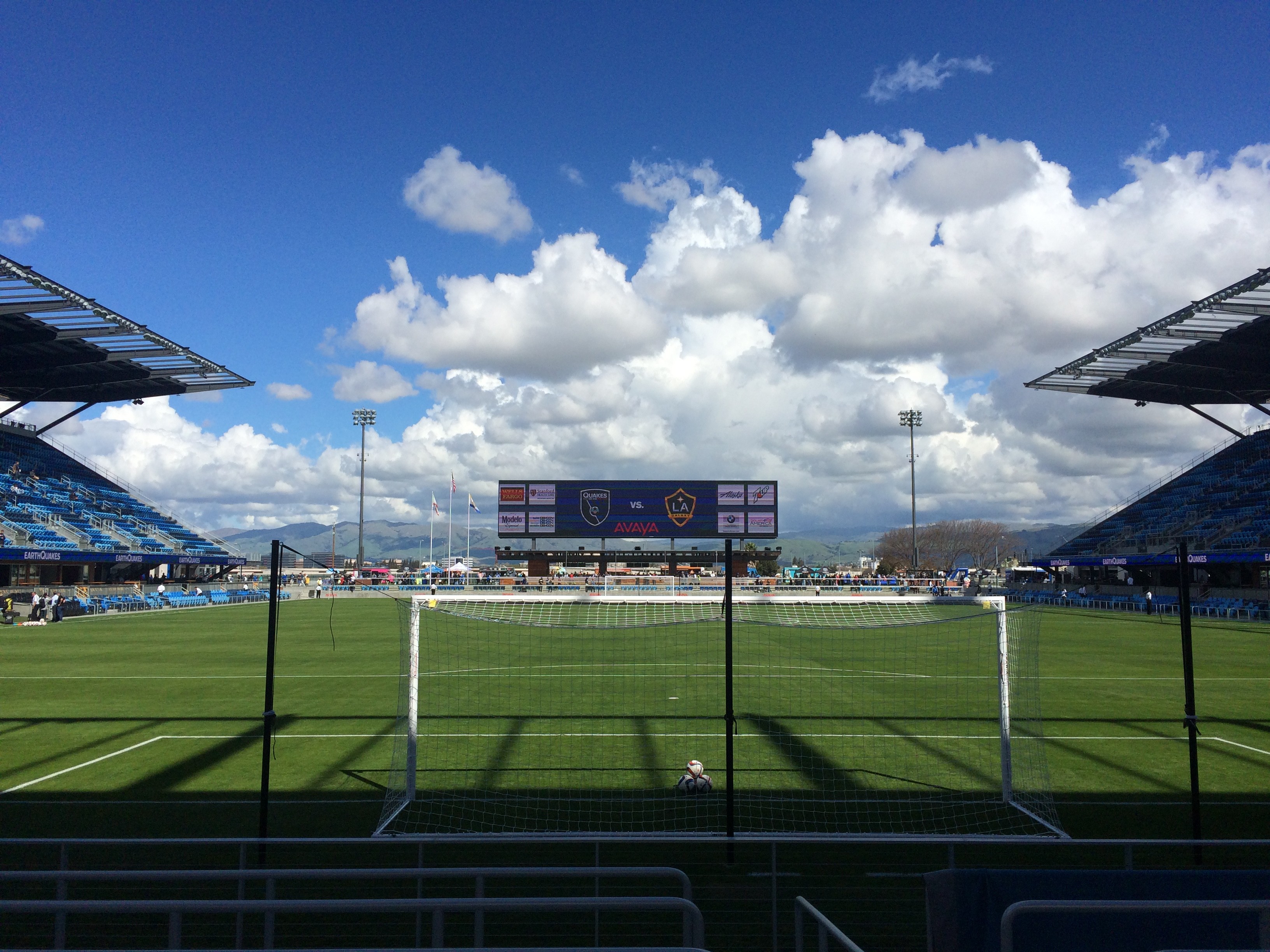 San Jose, CA – The LA Galaxy will go down in the history books today, but it’ll probably be for reasons they wish they could reverse. A 3-2 loss in their final preseason game isn’t great, but it was a “soft opening” for a brand new soccer specific stadium, and the Galaxy clearly know, that come the 2015 regular season, the Quakes’ new home will be a formidable challenge.

The first half stood out for the visiting SoCal side. With injuries to the starting lineup, the team was able to catch glimpses of young talent (Bradford Jamieson IV, Jose Villarreal, Andre Auras) and a shell of what a starting XI could be.

Husidic, DeLaGarza and Zardes were all left off the traveling roster. They should return to full training on Monday and be ready for the season opener. But in this game, there were wholes to fill and minutes to be played.

“I think the most important part, at this time, was to get players some extended minutes. We were able to accomplish that.” Bruce Arena, LA Galaxy Head Coach / GM

In the first half the LA Galaxy showed a lot of that 2014 passing. The Sequences started with short, quick combinations and connected multiple runs with open space. The only thing that was missing today was the finishing. A fact striker Alan Gordon didn’t shy away from.

“I think we can get a little shaper in the final third. But I always think that’s the last thing to come – it’s the most difficult thing to get sharp and you need real game to do that.” Alan Gordon, LA Galaxy Striker on the game

Bradford Jamieson IV showed some flashes of brilliance, but ultimately was missing that last touch of brilliance that leads to a goal. He did have a great shot in the second half which was quick, powerful and on target. However, it was ruined by a stellar save from San Jose Goalkeeper Bingham who was able to parry the ball over the bar.

The LA Galaxy did most of what you’d expect them to do. There were large portions of possession and they limited San Jose to counter attacking. But San Jose did that well. Several dangerous chances developed, and in the 42nd minute they finally broke through.

It was individual skill that moved San Jose to place a dangerous cross that went off of Brian Rowe’s fingers only to bounce directly off of Omar Gonzalez’s shoulder and into the goal. The official call was an own goal and Omar Gonzalez went down in history.

“Kenny Arena came up to me and was like ‘you know you should really try to score the first goal in this stadiums history.’ Except it was for the other team. So I still got that under my belt. So (you) can’t take that away from me.” Omar Gonzalez, LA Galaxy Defender, joking about his own goal in the first half.

Remember this: In a couple of years someone will ask you who the first person to Score at Avaya Stadium for the San Jose Earthquakes was. When you say “Omar Gonzalez” they’ll laugh at you and, of course, you’ll be right.

The Galaxy went into Halftime down a goal, but they controlled most of the play. Not bad for most of the starters. And the passing and interchange was comfortable and quick. Just what you’d like to see from a team trying to get ready for the season.

In the second half San Jose, behind goals from Koval (58′) and Jahn (67′), really solidified the Quakes’ position. It was set-piece defense and midfield tracking that really led to the Galaxy falling behind.

Todd Dunivant came on at halftime to replace Leonardo at center back and that may’ve led the Galaxy to botch their defensive positioning. It was just a mash of player not 100% familiar with the roles they were asked to play. With AJ DeLaGarza out and Leonardo coming off at the end of 45 minutes, there was only one defender left on the bench. So It was Dunivant playing in the middle of defense and his partners around him trying to adjust.

“They told me before the game that might be an option. It’s nice to have that as another position I can play. Obviously a new experience but I thought it was good.” Todd Dunivant, LA Galaxy Defender on playing Center back.

The Galaxy also brought in Jose Villarreal early in the second half to replace Bradford Jamieson. Jamieson did well, but minutes after subbing off, Villarreal (65′) combined for a great header goal with Robbie Keane. At the time this made it 2-1 as the Galaxy chased the hosts. But obviously with Adam Jahn scoring just minutes later, the difference between the teams wouldn’t hold.

Then it was Robbie Keane doing the scoring (82′). Keano was clinical with his finish and was probably unlucky not to have picked up a couple more. But Robbie brought the game to it’s closest deficit and move the Galaxy into a position to win, even if it wasn’t it the cards.

The man who received the biggest pre-game cheer during the announcements, Alan Gordon, missed several chances to score goals of his own. But finishing will come. And you have to love a 90 minute shift by Keano and Gordo.

The final act to the soft opening of Avaya Stadium was hail. A lot of hail. The wind picked up, the storm swept in and Boom – it hailed.

Robbie Keane didn’t mind the weather. In fact, for this Irishman, he probably would’ve preferred it pour for the entire game.

“Should’ve been like that at the start of the game and then there would’ve been a bit more quality.” Robbie Keane, LA Galaxy Captain, on the hail and rain at the end of the game

The stadium is beautiful. It will do great for the league and the club. I also anticipate this will be a very loud atmosphere because of the configuration of the stands and ultimately, a great travel destination for LA Galaxy fans. Much better than the former “stadium” San Jose played in.