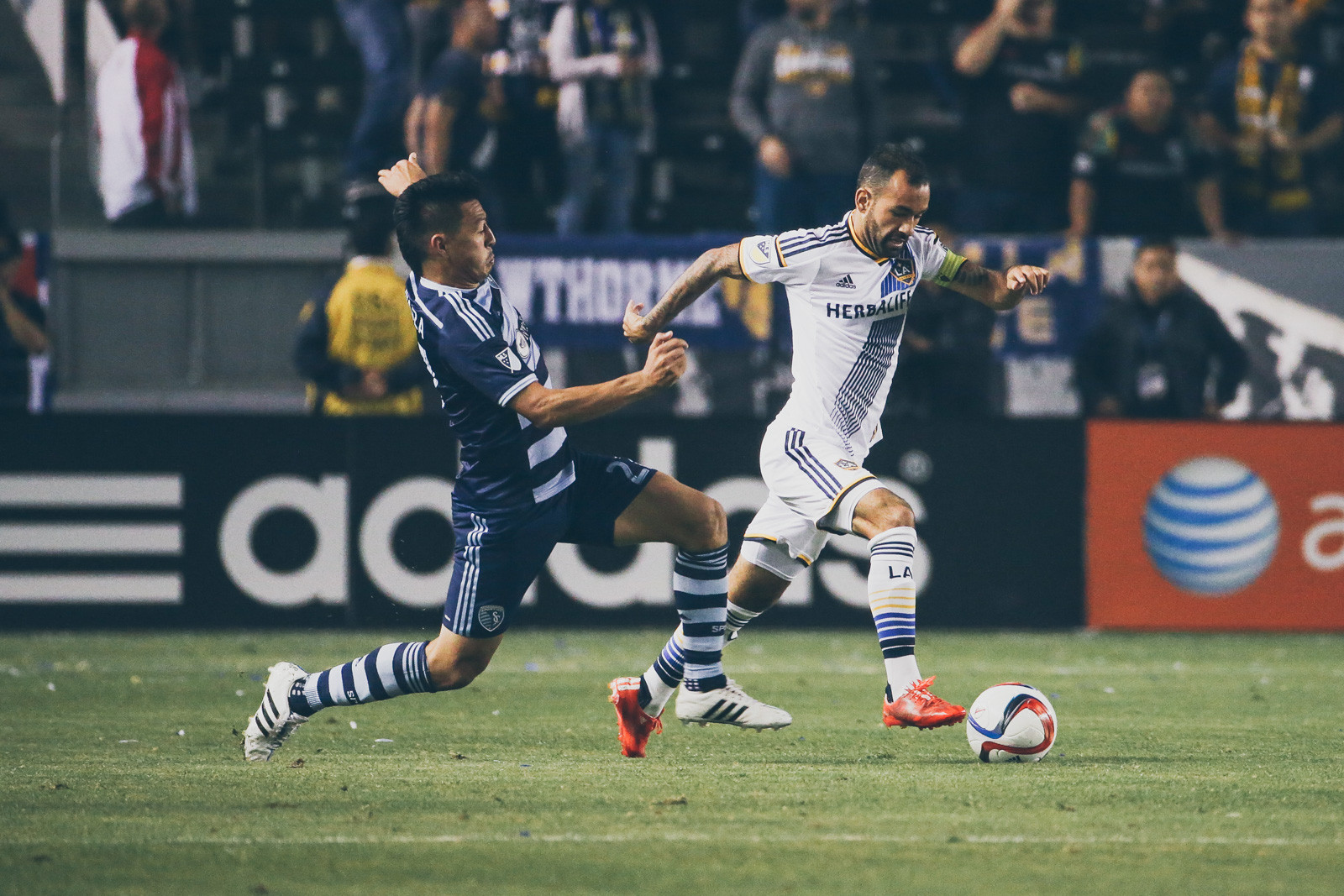 Galaxy Steal a Win in the Final Seconds

For the second game running, the LA Galaxy managed to take a makeshift lineup — one missing key starters Robbie Keane, Gyasi Zardes, and Omar Gonzalez — and turn it into a result. Comfortably at home in Carson, the Galaxy were locked in a draw against Sporting KC until an explosive final five seconds.

LA got on the scoreboard early. Stefan Ishizaki took a shot from a distance, which was blocked by Kansas City’s keeper Luis Marin. But Marin couldn’t keep ahold of it, and LA’s Baggio Husidic was rushing the far post when he got a foot on the rebound. Nine minutes in, the Galaxy were up 1-nil.

Krisztian Németh made sure LA’s lead was short-lived. Just 13 minutes later, Benny Feilhaber slipped Németh a through ball directly in front of the goal. Despite the Galaxy players’ pleading for an offside call, replays showed Dan Gargan kept the Kansas City striker firmly onside — and finishing from that distance was all too easy.

“I thought we were resilient in the fact that we got back into the game pretty quickly,” said Sporting KC head coach Peter Vermes. “Sometimes it is not easy when the other team scores. You want to check the reaction — I thought our reaction was very good.”

“I thought we were resilient in the fact that we got back into the game pretty quickly.”
—Peter Vermes, head coach, Sporting Kansas City

The next 70 minutes were a hard-fought stalemate, which gave LA’s makeshift lineup a chance to shine. Bradford Jamieson IV, all of 18 years old and starting in an MLS match for the first time, was a standout player. “I tried to downplay it as much as possible and treat it like a regular day,” said Jamieson afterward, in an endearing moment of honesty: “To be honest I woke up at like eight and watched Netflix almost all day on my couch.”

“To be honest I woke up at like eight and watched Netflix almost all day on my couch.”
—Bradford Jamieson IV

His teammates, on the other hand, were practically waxing poetic. “Watching him out there giving guys hell was awesome,” said Omar Gonzalez. “I thought he was busy and dangerous,” said Alan Gordon, adding that Jamieson “got unlucky and should have had a goal tonight.”

That near-goal Gordon’s referring to came in the 76th minute, when Gyasi Zardes and Jamieson paired up perfectly to give Jamieson a good look on goal. Kansas City’s Marin managed a big save, but the message for league watchers was clear: this is a pair to keep an eye on.

After blowing a chance that good, this game looked destined to end in a draw. Four minutes into stoppage time, Juninho lined up for a corner kick and it was clear: this would be the final play of the game.

Juninho’s well-placed ball just whiffed over the top of Alan Gordon’s head. But as it fell to the ground Omar Gonzalez got a foot on it. His shot took a deflection and found the back of the net.

“Any time you win a game, you have to take it, especially when it’s against a good team like Sporting Kansas City.”
—Bruce Arena

“When you play hard and hang in there, once in a while you get a little bit lucky and the ball bounces your way. We’ve been on the short end of those a few times,” said Bruce Arena after the win. “Any time you win a game, you have to take it, especially when it’s against a good team like Sporting Kansas City.”

The Galaxy next travel to face the New York Red Bulls, on a Saturday when — fingers crossed — they should be back to full strength.