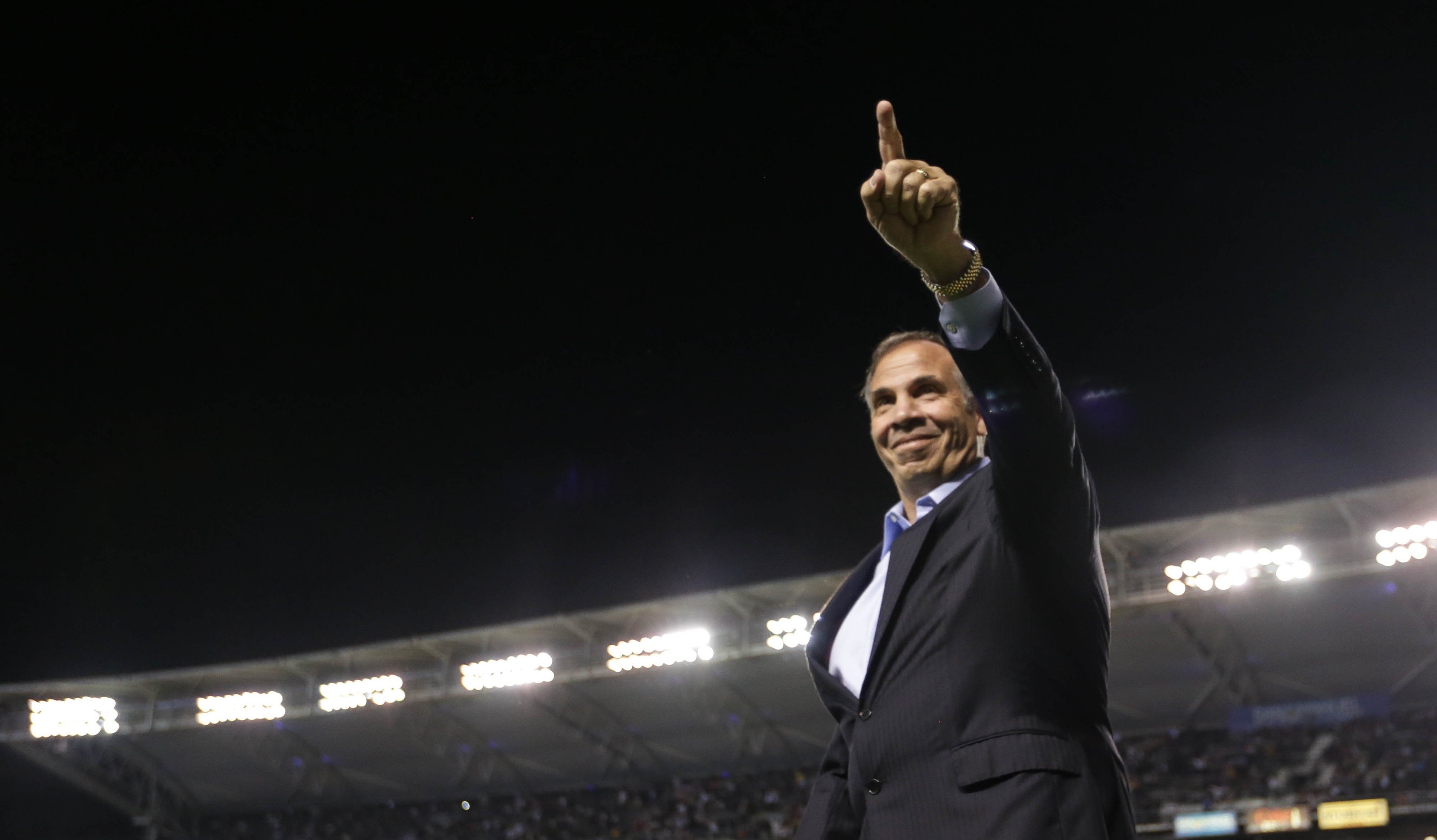 Bruce Arena and the LA Galaxy: Part I – The MLS Superdraft

“I think what coaching is all about is taking players and analyzing their ability, put[ting] them in a position where they can excel within the framework of the team winning.”

Any coach hoping to replicate Bruce Arena’s success in MLS must surely wonder: what is Arena doing right?  This article is the first in a multi-part series that attempts to answer that question.

When Bruce Arena assumed the reins of the LA Galaxy on August 18, 2008, the team was a far cry from the fluid and self-assured squad that swept through the MLS post-season in 2014.  Arena’s predecessor, Ruud Gullit, though highly-regarded in Europe, had resigned only a week earlier after a fitful nine months in MLS during which the Dutchman was confounded by MLS’ restrictions, e.g., the salary cap.  As Grant Wahl documented in his book, The Beckham Experiment, the team Gullit left behind was deeply divided, so much so that Gullit is still the go-to example of just how poorly coaching success in Europe translates to MLS.

Arena wasted no time transforming the team, and the success that has defined his tenure with the LA Galaxy is all the more remarkable when one takes into consideration the extent to which MLS is structured to enforce parity within the league, i.e., to prevent the emergence of the super-teams that exist in La Liga, the Bundesliga, and the Premier League.

Of course, the LA Galaxy’s recent success is not entirely attributable to Arena.  During an interview after winning the MLS Cup last season, Landon Donovan said:

Kudos must be shared, to be sure.  But the fact that the Galaxy’s reemergence as a perennial MLS Cup contender coincided with Arena taking the Galaxy’s helm suggests that his management has been critical to the Galaxy’s success in recent years.  Perhaps nowhere has Arena had better fortune than in identifying young talent and, as Shula noted, putting that talent in a position to excel.

With the emergence of the MLS academies, the Superdraft will shortly be ushered from the league onto the pile-heap of anachronisms that characterized MLS’ first two decades (See, e.g., the soccer shoot-out, the winding down clock, etc.)  But during those first twenty years, the Superdraft was the primary means by which young talent was signed to MLS clubs.  For this reason, it is perhaps the best tool we have to measure an MLS team’s historic ability to find young talent.  As a measuring stick for getting the most out of a team’s talent, the Superdraft will doubtless soon be replaced by a team’s ability to successfully transition players from its academy to the first team.

MLS Superdraft selection is ordered to give the biggest advantage to the least successful teams.  Expansion teams get the first pick, followed by non-playoff teams, then playoff teams, with the winners of the MLS Cup picking last.  Hence, the most successful teams have the lowest likelihood of being able to pick the brightest prospects.

Despite this, certain teams have a track-record of success in the Superdraft whereas other teams have been notably less successful.  Between 2009 and 2012, under the management of Peter Vermes, Sporting Kansas City selected with its first picks Matt Besler (2009 – 157 MLS Appearances), Teal Bunbury (2010 – 125 MLS Appearances), C.J. Sapong (2011 – 119 MLS Appearances) and Dom Dwyer (2012 – 68 MLS Appearances).  All four selections have proven to be impact players in MLS.  By way of comparison, none of the players taken by the Seattle Sounders with its first pick during the same time period (Steve Zakuani, David Estrada, Michael Tetteh, and Andrew Duran) currently play in MLS.*  Only one player selected by Real Salt Lake with a first pick between 2009 and 2012 still plays in MLS (Collen Warner).  And with the exception of Darlington Nagbe, who has been an excellent MLS player, the Portland Timbers’ first selections have been similarly ignominious.

Of course, the number of MLS appearances by a team’s top pick in the Superdraft is a rudimentary rubric by which to measure a coach’s ability to identify talent.  After all, some MLS teams are predisposed to load their rosters with foreign players, thereby diminishing their reliance on the Superdraft.  It is no coincidence that the three teams whose first picks have made the most appearances in MLS in the past six years (that would be the New England Revolution, D.C. United, and Sporting Kansas City), are teams with relatively few foreign players – and teams with a renowned disdain for splashing cash on pricey foreign imports.  Indeed, using this metric, the LA Galaxy land squarely in the middle of the pack.

Further, what, if any, conclusions can be drawn about a coach’s ability to identify talent when a team’s second or third pick in a given draft outperforms their first selection?  In 2010, the New York Red Bulls selected Tony Tchani with its top pick, and Tchani has carved out a journeyman career for himself in MLS.  But it was the Red Bulls’ second round draft pick that year, Tim Ream, whose outstanding performance in New York earned him a foray to Europe where he has twice received Supporters Association Player of the Year awards with Bolton Wanderers.  In 2011, the Columbus Crew’s first pick, Rich Balchan, spent three injury-ridden seasons in MLS before moving to the NASL, whereas its second pick that year, Justin Meram, is still a regular contributor for the Crew.  With this in mind, let’s turn our attention to Bruce Arena’s Superdraft record.

How has Bruce fared in the Superdraft?

In the 2009 Superdraft, Arena pulled off a coup that will go down in the annals of Superdraft history.  While most coaches favor using their top picks on attacking players (it is no coincidence that the first three players chosen in this year’s Superdraft were strikers), Bruce Arena used his first pick on a defender from the University of Maryland, Omar Gonzalez.  While choosing Gonzalez was not exactly an outlandish move (the 6’5” behemoth centerback was signed to a Generation Adidas contract), it is Bruce’s slightly more daring second round selection of which we must take note.

With the nineteenth pick in the 2009 Superdraft, Bruce added A.J. DeLaGarza to the Galaxy’s ranks.  DeLaGarza was not only a fellow Terrapin, he was a key component to the defensive line that won the University of Maryland the NCAA Championship in 2008.  Gonzalez and DeLaGarza played together for three years at the University of Maryland before joining the Galaxy together, and their symbiotic partnership is a crucial reason why the Galaxy have had one of the best defensive records in MLS for the past few years.  Omar’s aerial prowess effectively renders useless opposing team’s attempts at crossing the ball into the box, while his size and strength neutralizes enemy strikers who rely on physicality in the attack.  DeLaGarza, on the other hand, though eight inches shorter than his counterpart, reads the game quickly, positions himself intelligently, and is unerring in the slide tackle.**  In other words, their strengths conceal each other’s weaknesses: Omar dominates opponents with his body in a way DeLaGarza cannot, but DeLaGarza maintains focus on the field whereas Omar has occasionally been prone to lapses in concentration.

On average, each MLS Superdraft produces only a handful of players who establish fruitful careers in MLS.  By way of example, only six of the players taken with teams’ first picks in the 2011 Superdraft are still active in MLS: Perry Kitchen, Darlington Nagbe, Jalil Anibaba, Kofi Sarkodie, Zac MacMath, and C.J. Sapong.***  Some players chosen that year are plying their trade abroad (Omar Salgado, A.J. Soares) while others never managed to establish careers in professional soccer.  Moreover, since teams that consistently have losing records also have a better chance of securing more talented players due to their picks being higher in the pecking order, for a team with a record of success like the Galaxy, consistently identifying diamonds in the rough is even more challenging.

Taking into consideration the Galaxy’s selection order in the Superdraft since 2009, Bruce’s record has been very good, though probably not the best in the league.  Let’s take a look at how Bruce’s top picks have fared:

Bruce’s record fares favorably to other coaches in MLS, particularly when compared to other teams whose picks tend to fall lower in the table.

Which brings us to 2015.  Having won the 2014 MLS Cup, the Galaxy once again had the last pick in the first round.  On January 15, 2015, Arena used the 21st pick to select the diminutive Spanish attacker, Ignacio Maganto.  Maganto signed with the Galaxy two months later and since that time has made eight appearances for the Galaxy first team.  On May 31, 2015, Maganto scored his first goal for the L.A. Galaxy in an away game against New England, making him the fourth player from the 2015 Superdraft to score for his team during an MLS league game.****

What does Arena’s selection of Maganto say about Arena?  Well, Maganto was not the obvious pick.  Maganto played college soccer for Iona College, which is part of the Metro Atlantic Athletic Conference, a relatively small athletic conference.  In fact, Maganto was the first MLS draftee in the history of Iona College’s soccer program.  Nor does Maganto’s background or style of play exactly scream Major League Soccer.  Maganto, raised in Madrid, spent his childhood playing in Getafe’s youth system.  And for a league that loves size and strength, Maganto is instead small and technical.  But Arena’s move was immediately praised by a few soccer journalists: Though it is possibly too early to say, Maganto’s transition to the Galaxy first team has been relatively seamless, and his future with the team appears bright.

As a coda to this analysis, the MLS Superdraft can be used in more than one way to acquire players.  It is common for teams to trade picks for allocation money or indeed for other players.  For example, on January 14, 2009, Bruce Arena traded the Galaxy’s second round 2010 draft pick to the New York Red Bulls and in exchange acquired forward Mike Magee.  New York subsequently traded that pick to the Revolution who used it in the 2010 Superdraft to draft forward Zak Boggs.  Boggs made twenty-nine appearances and scored three goals during his two years with the Revs before leaving the club in 2012 to accept a Fulbright scholarship to study abroad.  Magee made 105 appearances and scored 19 goals for the Galaxy, winning two MLS Cups and two MLS Supporters’ Shields in the process.

To summate, Bruce Arena’s history with the Superdraft demonstrates a willingness to take risks on unproven talent (Iona College?), a thorough understanding of MLS’ arcane and wacky rules (“I’ll trade you my 2nd round pick in next year’s draft for fifty thousand Garber-bucks and a bump in the allocation ranking”), and to paraphrase Shula, an understanding of how to combine players to maximize their respective abilities and win (Omar + AJ).

Stay tuned for the next in our series on Bruce Arena’s impact on the L.A. Galaxy.

* Though Seattle historically has not covered itself in glory with the Superdraft, it looks to be bucking that trend this year.  Based on performances from the first half of the season, Cristian Roldan was the steal of the draft, and could earn himself a Rookie of the Year nomination come season’s end.

** Key evidence: DeLaGarza’s gorgeous 22nd minute pinpoint slide tackle on Charlie Davies during the 2014 MLS Cup caused Taylor Twellman to muse to himself over the microphone, “A.J. DeLaGarza, my goodness…”

*** To be fair, though, some players taken with a team’s second or third pick are still chugging along quite happily in MLS – I’m looking at you Jeb Brovsky, Michael Farfan, Will Bruin and Justin Meram.