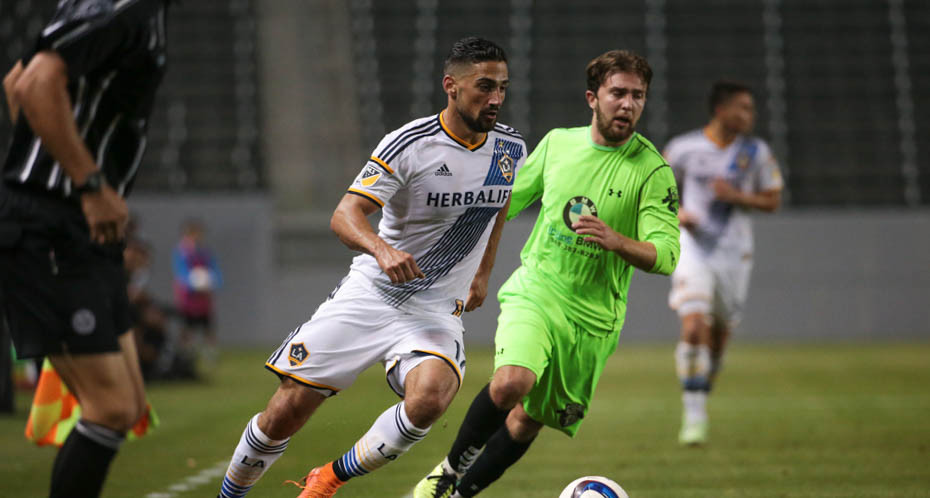 Robbie Keane scores three for the LA Galaxy as they dismantle PSA Elite in the fourth round of the US Open Cup.

The LA Galaxy routed Irvine-based PSA Elite on Wednesday night in a 6-1 victory at StubHub Center during the fourth round of the 2015 Lamar Hunt U.S. Open Cup.  Though the outcome of the venture rarely seemed in doubt, the game nonetheless offered numerous upshots on what fans can anticipate for the second half of the season.

LA Galaxy fans were likely most heartened to see their returning captain, Robbie Keane, put in a marvelous 70’ shift against the visitors. The Irishman tallied goals in the 29’, 53’, and 70’ minutes to record the third hat trick of his MLS career, and his first-ever hat trick in U.S. Open Cup competition.  In light of the family tragedy which saw the passing of Keane’s cousins, Alan and Stephen Harris, in Dublin last week, it was particularly gratifying to see Keane bounding across the pitch like a stag on the hunt.  Though Keane is over a decade older than many of his compatriots, he still plays the game with irrepressible enthusiasm, and the boyish grin that spreads across his face when he scores a goal always buoys the atmosphere of a Galaxy crowd.

“As a striker, it’s always important to score goals. Ultimately, you’re judged on scoring no matter what people say. You can do what you want for the team with hard work, but people will look at goals and assists. And since I’ve been here I’ve done that and done it well.” Robbie Keane, LA Galaxy Captain

Even in a David versus Goliath story where Goliath hammers David, credit still must be given to PSA Elite who played with vigor during the first half of the game, opening the scoring during the twelfth minute when UC Riverside forward Michael Salazar booted the ball past Galaxy keeper Brian Rowe (though PSA Elite possibly scored that goal from an offside position).  However, the pronounced athletic disparity between the teams was evident in the second half as PSA Elite defended against an onslaught of attacks by the Galaxy.  Still, PSA Elite will walk away from the 2015 Lamar Hunt U.S. Open Cup as winners of the $15,000 bonus for advancing the furthest in the competition from its respective division (PSA Elite plays in the United Premier Soccer League of the United States Adult Soccer Association), and take comfort from the fact that this is the second year in a row that the team has bested professional sides before being knocked out of the competition.

The Galaxy, too, have numerous positives to draw from the match.  Though playing an inferior team often results in a flattering scoreline, Bruce Arena nonetheless took full advantage of the opportunity by chucking the LA Galaxy’s youngsters on the field, and several impressed on the night.  Ignacio Maganto continues to demonstrate a soccer IQ uncommon in MLS rookies by participating in two of the game’s more attractive goals: the first came in the 19th minute when the Spaniard slid the ball to Keane, lurking behind PSA Elite’s defenders, who then gleefully slapped the ball into the back of the net.  The second arrived only ten minutes later when Maganto, amidst traffic, headed the ball to Keane for yet another goal.

“I think we (Lletget & himself) are two players that like to play on the ground, play two touches so I think that we understand each other really well and we saw that today on the field.” Ignacio Maganto, LA Galaxy Midfielder

And though he still appears to be gaining match fitness after joining the LA Galaxy from West Ham United, Sebastian Lletget also showed enormous promise.  The attacking midfielder scored in the fifteenth minute for his second goal in as many games, harassed PSA Elite players all evening, and continuously looked eager to create and exploit chances. Further, though he appeared to cramp slightly in the 80th minute, the San Francisco native’s muscular build suggests that at peak fitness he will have no trouble dealing with the physical play that characterizes MLS.

“Sebastian played well. He is coming along the last two-three weeks; he is getting fitter. We wanted to give him 90 minutes, we gave him 80 if I’m not mistaken. So we’re trying to move him forward quickly, and he has responded well. He is a good player, a good soccer player.” Bruce Arena, LA Galaxy GM / Head Coach

Finally, though he only saw action during the second half, LA Galaxy Homegrown player Jose Villarreal once again demonstrated why Arena has seen fit to play him as a starter this year (when he has been healthy.)  Villareal showed bits of skill against PSA Elite’s defenders that were delicious enough to eat with a spoon and took an optimistic shot at goal in the 63’ minute though it sailed over the bar.

The Galaxy will face the San Jose Earthquakes for the fifth round of the Open Cup on Wednesday, July 1, 2015, at Avaya Stadium. The game will be played in the middle of a hectic five game stretch in the span of just 15 days.