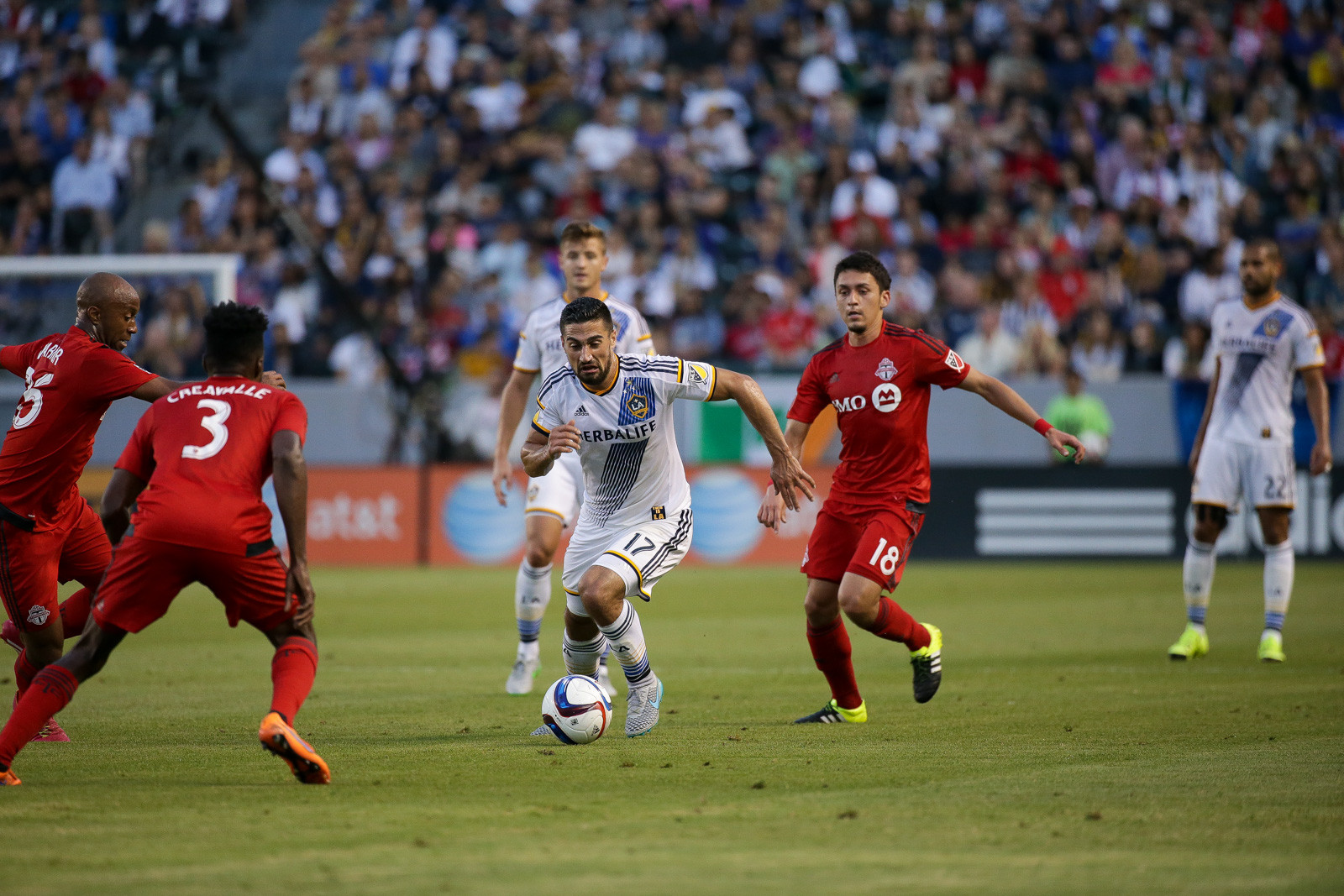 The LA Galaxy continue to shine in a dominant performance against Toronto FC on the 4th of July.

The fireworks show after the match was not the only explosive action at Stub Hub Center on Saturday night. The LA Galaxy again showed that playing at home is the perfect salve after a disappointing loss to San Jose the previous week. Robbie Keane scored his first hat trick of the 2015 season, Sebastian Lletget added his fourth goal in as many starts against the visitors from Canada, and English legend Steven Gerrard was introduced to the fans during a halftime ceremony. In a surprising move, it was revealed after the match that LA released midfielder Stefan Ishizaki so he could return to Sweden for family reasons.

The Galaxy is used to being the team that has to deal with star players being gone for national duty and that was no different Saturday night as Omar Gonzalez, Gyasi Zardes, and Jaime Penedo were preparing to compete in the Gold Cup with the US and Panama national teams. However, Toronto was missing five players as Jozy Altidore and Michael Bradley were also with the US team while Ashtone Morgan, Jonathan Osorio, and Quillan Roberts were with the Canada national team. With Toronto missing many of their biggest threats the Galaxy could easily expect Toronto’s offense to focus on Italian forward Sebastian Giovinco. Sure enough, the Atomic Ant’s speed did provide many dangerous opportunities for Toronto but the Galaxy defense centered by A.J. Delagarza and Leonardo was able to withstand the pressure and Brian Rowe made a couple of excellent saves on his way to his second shutout of the season.

“We were aware of where [Giovinco] was and whenever we could, we brought a second player around him to help stand him up.”
—LA Galaxy GM/Coach Bruce Arena

It’s Good to be The Keane

LA’s offense was effective from the very start of the game. Keane started his tally by nailing a 9th minute penalty kick to the upper right post, driving it past Toronto keeper Chris Konopka. He added his second goal just before halftime after creating space between the Toronto defense and receiving a clean pass from Baggio Husidic. He completed the hat trick in the 59th minute by intercepting a poor back pass and getting behind Konopka for an easy tap into the empty net. With these three goals Keane doubled his scoring for the season and moved to the top of the Galaxy leaderboard. After an injury-plagued start to the season, Keane’s return to his MVP form of last year should be worrisome to defenses around the league.

“You have to be in the right spots, and he definitely knows where to be on those. It’s never easy to get three goals in one game, but if there is any way to make it look easy that was probably it.”
—LA Galaxy defender A.J. Delagarza

The Threat is Lletget

Ever since he cracked the starting lineup, Lletget has shown why Arena wanted to add him to the club. He has the physicality, the ball handling skills, and the pace to create problems for any defender. He did just that in the opening minutes of the game as his run into the box forced Toronto defender Warren Creavalle to take him down, setting up the penalty kick Keane converted. Lletget was a presence throughout the match and eventually was able to get the ball into the back of the net himself just before the final whistle in the 94th minute. The future appears bright for the 22 year old Californian and with over a dozen games left in the MLS season along with the US Open Cup, the CONCACAF Champions League, and the International Cup on the horizon he will have plenty of chances to make solid contributions during his inaugural season with LA.

“He continues to play well. He’s a good player. He uses his body well. What more can you say? He’s probably scored four or five goals for us as well. He’s made an outstanding contribution.”
—Bruce Arena

After a private practice with the team on Friday, July 3, legendary midfielder Steven Gerrard was introduced to the fans during a halftime ceremony. Club President Chris Klein introduced Gerrard and the Englishman spoke briefly to the fans, promising to do his best to bring more success to the franchise. He will have his first regular practice with the team on Tuesday, July 7 and could possibly play in the International Cup game against Club America this Saturday, July 11 before making his league debut on July 17 against San Jose.

After the match the news broke that midfielder Stefan Ishizaki had asked for and been granted his release from the team. It is reported that his wife is pregnant with twins and for family reasons he wanted to return to Sweden. Ishizaki was a key part of last year’s championship run and leads the team in assists this year along with fellow midfielder Husidic. In a post-game interview he said, “Getting a cup out of it was all I wanted from this experience. Winning something and going back to Sweden as a champion. I’m happy with what I’ve performed here, but I’m very sad that I have to leave. But like I said, it’s something that I feel I have to do for my family.”

Ishizaki’s absence will be felt as he was known for delivering quality crosses as well as taking corner and free kicks. However, with Gerrard about to join the lineup, Lletget and Husidic superb work on both ends of the field, and rumors of Giovani dos Santos joining LA continuing to make the rounds, this could be a blessing in disguise. While it is never desirable to lose a key starter, the Galaxy should be in a position to come out of this fine.

“[Ishizaki] is such a good guy, and a good player, so it’s going to be a loss. We wish him the very, very best, and I’m sure he’ll be fine.”
—LA Galaxy midfielder Sebastian Lletget

The LA Galaxy next play on Saturday, July 11, against Club America at Stub Hub Center. The game starts at 8:30 PM and will be televised on Fox Sports 1.