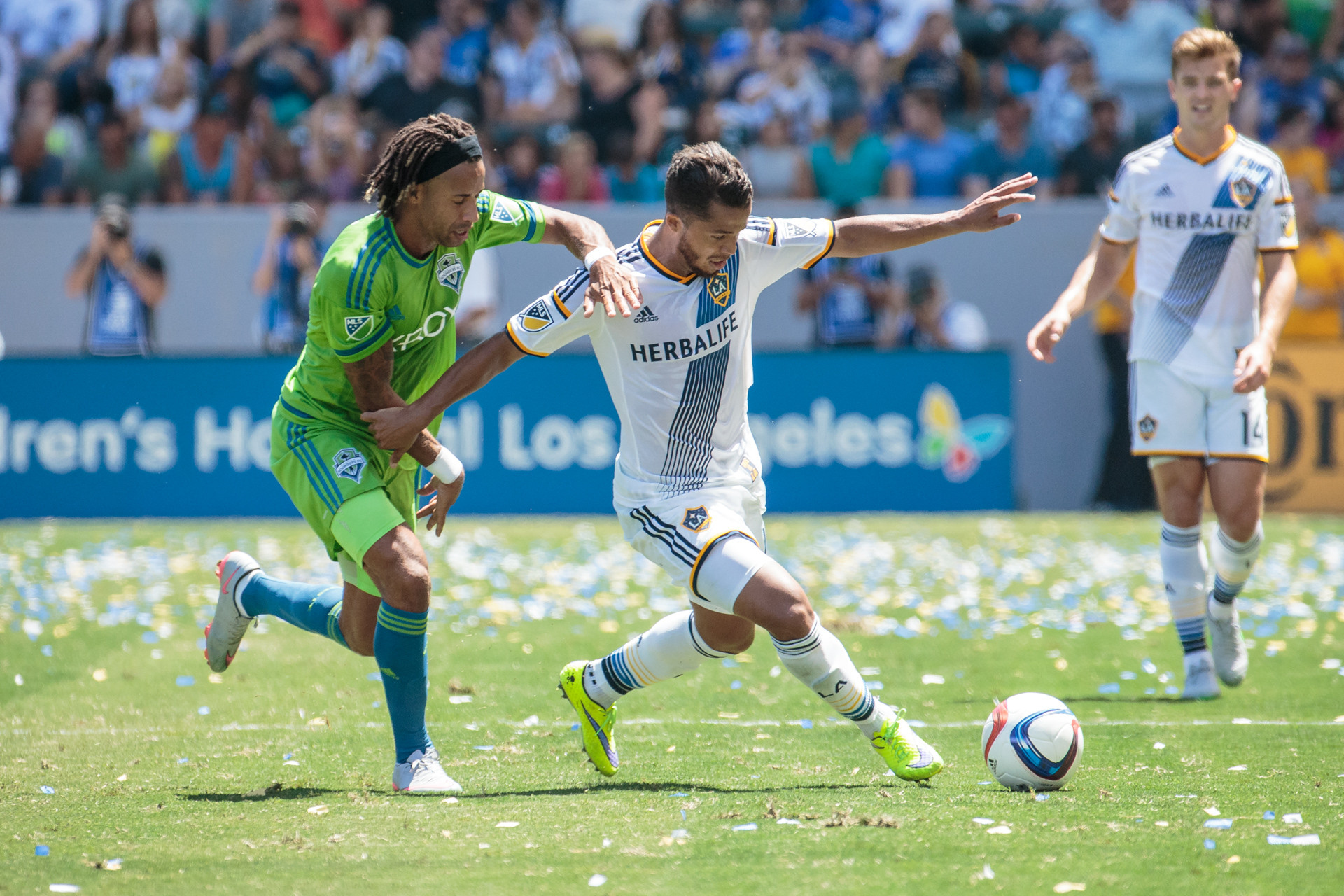 “As you know, soccer is a journey.”
—Giovani dos Santos

It’s a promising new beginning for Giovani dos Santos, LA Galaxy’s newest international signing, who played with LA for just the second time yesterday, donning #10 proudly and netting a goal in each of his matches last week.

As a former and current teammate, Robbie Keane certainly has confidence in Giovani’s capabilities and potential.

“He was only [19 when he arrived at Tottenham], just a kid,” Keane said. “He didn’t get the opportunity that I felt he should have at times and, obviously, he did as well, but that’s the way it goes. I think things like that can sometimes help players, help them mentally. Look at the season he had last year [at Villarreal]. He had, what, 16 goals [actually 12]? He was one of the best players in [La Liga]. He’s a fantastic player; we’re lucky to have him.”

Change and versatility come naturally to Giovani Dos Santos, having bounced around after his rise through the ranks of FC Barcelona where he accumulated 37 appearances and 4 goals. In spite of the success within the Barcelona system, his venture with Tottenham Hotspur didn’t prove as consistent or promising, where was bounced around from Ipswich Town, to Galatasaray in Turkey and Racing Santander.

Dos Santos eventually returned to Spanish football in 2012/13, when Mallorca secured the rights to the player, and in 2014 was sold to Villarreal where he began laying some roots and having an impact. As a versatile forward, Dos Santos scored 12 goals in 57 La Liga matches for Villarreal over his two seasons, but only once in 2014-15 due to few starting opportunities.

As the new No. 10 for the LA Galaxy, goals will come naturally again and, once he settles in with his teammates, likely regularly. As for now, fitness issues that come with a fresh start and recovery from an injury sustained during El Tri’s Gold Cup campaign, are limiting his prowess on the pitch, but that hasn’t stopped him from tallying goals already.

“In all fairness, at this point his fitness isn’t where it needs to be to be playing in the midfield. If you saw the job that Gyasi and [Sebastian] Lletget did today, it was terrific, and those are two players that are very fit and it would have been a tough position to put Giovani in.”
—LA Galaxy Head Coach, Bruce Arena.

“I think it’s true, I’m coming off an injury and obviously as I play more games and in these coming two weeks I am sure I will be in my best form,” Dos Santos said. “I will become fitter with more games and during training, and little by little I will be recovering my best level and it will be better for me and for the team.”

Giovani’s natural ability to adjust to new conditions and different styles of soccer were on full display yesterday. His selflessness and instinctive thinking led to the winning goal for LA Galaxy, as he tapped a cross from A.J. DeLaGarza to Robbie Keane, who easily put it through to the back of the net.

Robbie Keane, with an assist from a certain newcomer, gives the #LAGalaxy a 2–1 lead over #SeattleSounders http://t.co/eMOBTD8OcB

Keane returned the favor, in the 64th minute when he sent a gorgeous pass straight to an unmarked Giovani who then easily outplayed a vulnerable Frei and netted his first MLS goal. Five minutes later, as he left the pitch, he was greeted with heartfelt applause from substitution Alan Gordon and rousing cheers from the jubilant home crowd.

It’s clear that he’s searching for a home that not only challenges him but has a need for all his versatility and allows for him to develop consistently. MLS is the perfect league for that. LA Galaxy is the perfect ‘home’ for him, with a progressive and ever-evolving style of play that Bruce Arena fosters. But being a No. 10 for LA Galaxy is also a transformative process. As Landon Donovan showed, it is perhaps the most boundless position because of the many options Arena allows for, and Giovani’s ability to play as an attacking midfielder, winger and and forward make him an ideal fit.

What does it mean to be a No. 10? Historically, positions in soccer were less flexible than they are now where players are known to and often expected to display diversity and flexibility in their positioning and role. Basically, up until the 1970s, all jersey numbers had a meaning attached to them. The system being currently used is one developed in the 1970s by by Rinus Michels, “Total Football”, wherein defensive players also help the offense and vice versa. In the end it’s less about exact position and more about actual quantitative impact. So what’s really in a number? Bruce Arena firmly states, “It’s just nice that we think we have an exceptional player following in the footsteps of the previous No. 10.”

The best is yet to come from both Dos Santos and LA Galaxy. With a building team chemistry, deeper bench and new identity, LA Galaxy are not just well-poised for a run at the Cup, but for a new era.