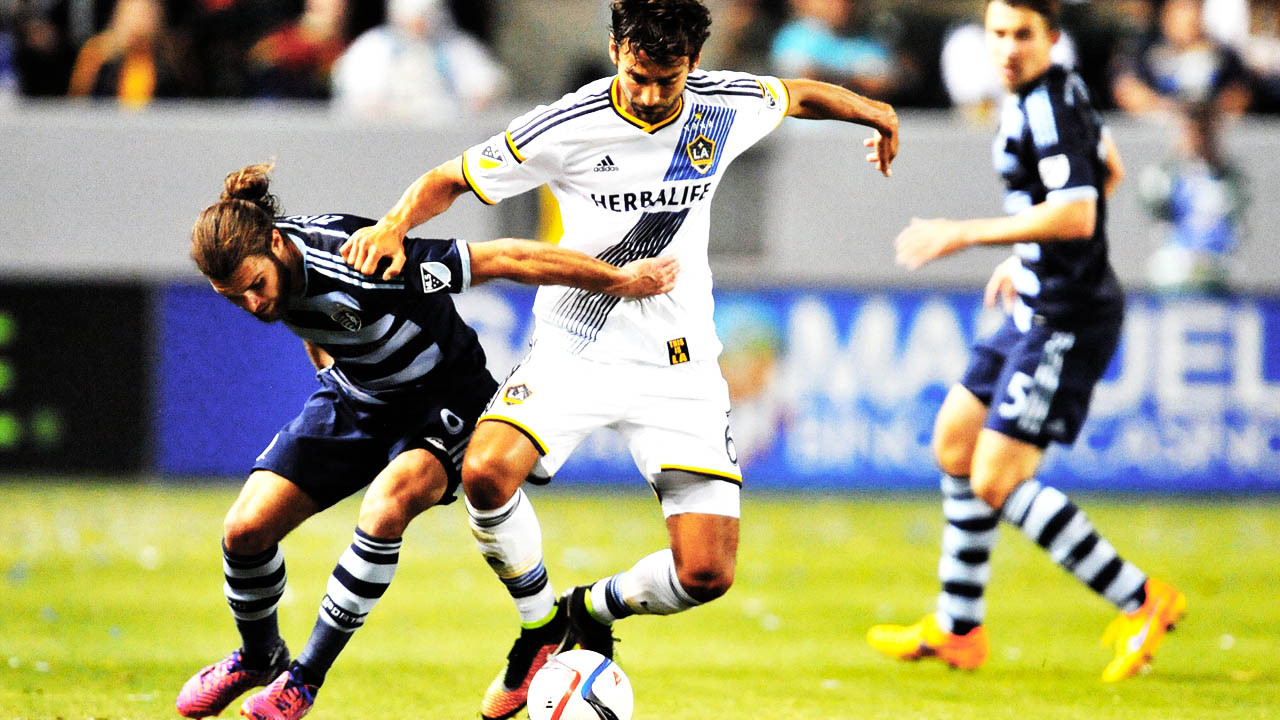 In a word, the showdown between Sporting Kansas City and LA Galaxy today is surreal; an unpredictable selection for the marquee Western Conference match to be televised nationally. Essentially it’s a battle of two funks, the epitome of two teams who ought to be in peak title race form (both former MLS Cup winners) by now, but who fell into a perplexing cycle of complacency. Whoever snaps out of the funk first will win.

Sporting Kansas City faces as close to a Final as you can get in the regular season. It’s a final,” Kansas City coach Peter Vermes said after their loss to Colorado last week. “We have to win to get in.” Technically not true. A loss by San Jose (who are just one point behind) at FC Dallas would be enough to allow SKC to qualify no matter what so there’s a likely lifeline. Sporting KC’s slump came on the heels of a U.S. Open Cup trophy win. They’ve lost their last two games without getting on the scoreboard and have won only two of their last 11 matches.

It’s hard to find anything positive in the headlines when it comes to the LA Galaxy these days. Their Race to Seis campaign has quieted down to a dull murmur and echoes of the past glory days are fading fast from supporters’ minds.  As for LA’s, the slump is systemic and strategic, whether it’s from lack of fitness or the sitting back ‘every man for himself’ posture in recent matches. LA’s offense this year has always felt a bit shaky since the incorporation of Dos Santos and Gerrard into the formation, and what appears to be lacking is on-the-field leadership from these highly compensated new players. But the Galaxy have allowed nine goals in the last five games. Rather than point out a real team deficit in defense on all fronts, the blame often falls to the likes of Leonardo and Omar Gonzalez who are sometimes caught way off-position attempting to fill in the gaps. Meanwhile there are plenty of signs what is lacking in the midfield is a true and equal (this is important) partnership between newcomer Gerrard and the steadfast Juninho, who could be questioning the direction of his own future with the Galaxy (yes, I said it).

Considering that both SKC and LA are inconsistent and unpredictable, it’s a bit comical that this is the match that has been chosen to be the marquee of the Decision Day national broadcasting. Hopefully they feel pressure.

“We want to be in competitive games. Our playoffs are now (starting) on Sunday.” -Tim Melia, Sporting Kansas City. In my mind, that’s the attitude of winners.

On the other hand, all signs point to LA not feeling much pressure – maybe that’s the problem? They’ve already cinched a spot in the playoffs so does it matter to them placing anywhere from 2nd to 5th in the conference?

“I don’t know if there’s an advantage one way or the other, to be honest. Any one of the 12 teams that get into the playoffs are in position to win.” – Bruce Arena.

Mind you, in 2012 they won the Cup from fourth place. Even players are singing a similar dull tune: “Although we lost against Portland, I feel like we’re right where we want to be. We’re in second place, and our fate is in our hands. That’s exactly what we want.” – Gyasi Zardes. They’re clearly not where they want to be, only Dallas and the NY Red Bulls can claim that. But at least there’s a truth in there. The fate of LA is in their hands. A win would not only mean one less match (and they may need that first-round bye), but it would mean that they would be one step closer to believing they could go all the way to the top. This is not the dreamteam of 2014. This team needs more time to incorporate, but they’ve run out of time. Instead, they need to recapture the mentality that fueled their August run; they need a bandaid. Currently there is, as Josh and others have pointed out, no momentum, no spark, and for how long can one man lead by example?

Robbie Keane is LA’s saving grace, but he cannot carry them on his back through the playoffs. “It’s defending as a group. It’s everybody as a group, whether it’s the strikers to the goalkeeper. You always have to defend as a group. You win nothing if you don’t defend as a group,” he pointedly states at the conclusion of last week’s 2-5 humiliating thrashing from the Timbers. In spite of all of this, LA Galaxy have scored more goals than any other side in the Western Conference and Keane is one of the main reasons why. He has 19 goals and eight assists this season and has scored in his last three matches. LA win an automatic semi-final berth with a win today, whereas a tie would be enough in the unlikely event that both Vancouver Whitecaps and Portland Timbers lose.

Prediction: LA score first. Then give the lead away and scrappy soccer in the second half ensues. Unless they heed the wise advice of assistant head coach Dave Sarachan who honestly assessed the regularity with which LA gives away the game in the final minutes and offered a solution: “Make sure that we have the right players in the right spots with experience that make those plays.” Easier said than done. There will be no change in the lineup except hopefully for the return of new dad (congrats!) A.J. DeLaGarza, which means the stable Omar and A.J. pairing is back! The dreamer in me says this will end 2-1 in LA’s favor. With just one victory in the past five matches, Sporting KC has never cinched a playoff berth in the regular- season finale.