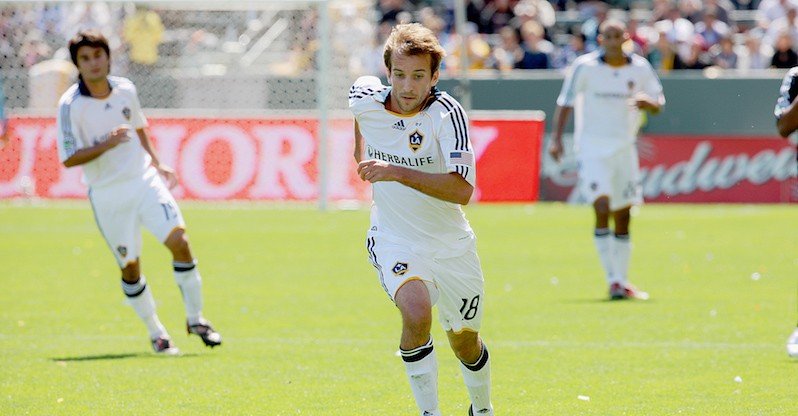 Carson, CA – After three seasons away, forward Mike Magee is returning to the LA Galaxy. Magee spent three years with Chicago Fire before LA brought him back through free agency.

Magee was traded to Chicago in May of 2013 for then-midfielder Robbie Rogers – a trade that at the time was perceived to be a negative for the Galaxy given the struggles Rogers experienced on the field. Now, Magee returns to a side that includes a much improved Rogers playing at left back, and adds another attacking option to an already strong offense featuring Designated Players Robbie Keane and Giovanni Dos Santos, and rising stars Sebastian Lleget and Gyasi Zardes.

“Mike has shown that he is one of the most versatile and effective players in our league. He is familiar with our club and will be a key part of our team on and off the field. We look forward to Mike joining to our roster.” Bruce Arena LA Galaxy Head Coach and General Manager

Magee has been in MLS for thirteen years, including stints with New York Metrostars/Red Bulls, LA Galaxy, and the Chicago Fire. In 286 appearances, he’s scored 64 goals and logged 34 assists, winning two MLS Cups (both with Galaxy in 2011 and 2012), and being named the 2013 MLS Most Valuable Player. That season was the most successful of his career, one in which he scored 21 times and provided seven assists.

“We’re thrilled that to be able to get a player that we know really well that had great success with us. For me personally I’ve known Mike (Magee) for many years and all of our staff (do as well), so we know what we’re getting. A quality player that can really give us some depth in the attacking part of the field, which is always an important element within your team” Dave Sarachan Associate Head Coach

During LA’s MLS Cup runs in 2011 and 2012, Magee was an integral part of their success, scoring 19 goals and 11 assists during the regular season, and adding 8 goals in 17 postseason appearances. That included the game winning goals in the MLS Western Conference Semifinals against New York and the Western Conference Championship against Real Salt Lake. In the 2011 campaign, the Galaxy were 8-0-1 in games where Magee scored.

Perhaps Magee’s most famous outing, however, was when, in a series of unfortunate events he found himself playing goalkeeper for the Galaxy on the road versus the rival San Jose earthquakes. That June 25th, 2011 Performance propelled Mike Magee into another level of hero worship by the teams supporters. Even kicking off the famous hashtag #MikeMageeFacts.

New York MetroStars and then head coach Bob Bradley drafted Magee in 2003 with the fourth overall pick in that year’s SuperDraft, and he became the youngest player to ever appear in a New York jersey when debuted professionally against Columbus that year. He also became the youngest New York player to score a goal when he found the back of the net against Columbus in April. Magee scored 23 goals and had 13 assists in his six years with New York.

Magee has had appearances with the U-17 and U-20 US Youth National Teams, and earned a call up to the Senior Team in 2004. His most recent call-up was in the 2014 edition of ‘Camp Cupcake’, the USMNT’s January Camp.

Internationally, Magee has featured for youth national teams for the U.S., including appearances in the FIFA World Cup for the U-17’s and U-20’s. In 2004, he earned his first call up into senior National Team camp. He was most recently called by USMNT head coach Jurgen Klinnsman to participate in the 2014 edition of the annual January camp.