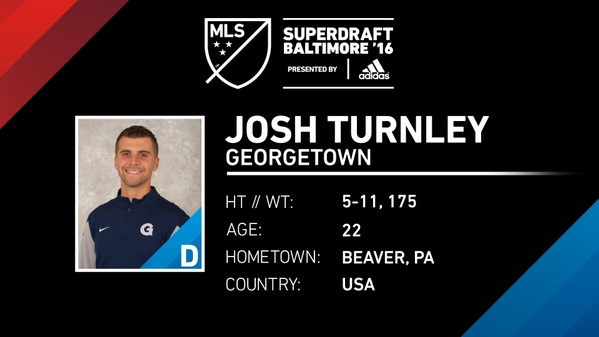 LA Galaxy Draft Josh Turley In Third Round of Superdraft

Defying the expectations of those who expected the LA Galaxy to leave the MLS Superdraft sans players, the Galaxy selected left-back Josh Turnley from Georgetown University in the Third Round of the 2016 MLS SuperDraft.  Less surprisingly, the Galaxy passed on their remaining SuperDraft selections (53rd overall, Third Round; 73rd overall, Fourth Round).

Congrats to @turnley007 proud of you man. Meet your new teammate @Emaboateng

Though somewhat overshadowed by his Georgetown teammate, Joshua Yaro, who was selected second in the Draft by the Philadelphia Union, Josh Turnley similarly played a pivotal role on the Hoya’s defensive line over the past four years.  A starter in three of his four years at Georgetown, Turnley helped Georgetown earn 9 shutouts in 18 games during his senior season en route to a 16-2-3 overall record.  During his time at Georgetown, Turnley earned Big East Conference All-Academic Team (2013, 2014) and Georgetown’s Most Improved Player (2013) honors.

Congrats to Josh Turnley of @GUHoyasMSoccer on being drafted #1 in the 3rd round of the @MLS draft by the @LAGalaxy pic.twitter.com/quNTTxgvxf

In recent years, the Galaxy has become less reliant on the MLS Superdraft as the LA Galaxy’s Academy has supplanted the Superdraft as its primary source of youth talent.  Instead, LA Galaxy General Manager and Head Coach Bruce Arena prefers trading the Galaxy’s picks for allocation money, a far more valuable commodity to a team like the Galaxy which, as a high-spending team, is always looking for ways to stay within the financial strictures imposed by the league than it would be to a team like the Colorado Rapids.  Not coincidentally, the Galaxy traded their first round pick (12th overall) to Colorado in exchange for an unspecified amount of Targeted Allocation Money.

Given the Galaxy’s current depth, if Turnley earns a contract with the LA Galaxy, it will likely be with Los Dos.  Turnley, a left back, is an ideal choice to replace Dave Romney, who occasionally played as a left back for Los Dos, since Romney joined the LA Galaxy senior team last season.