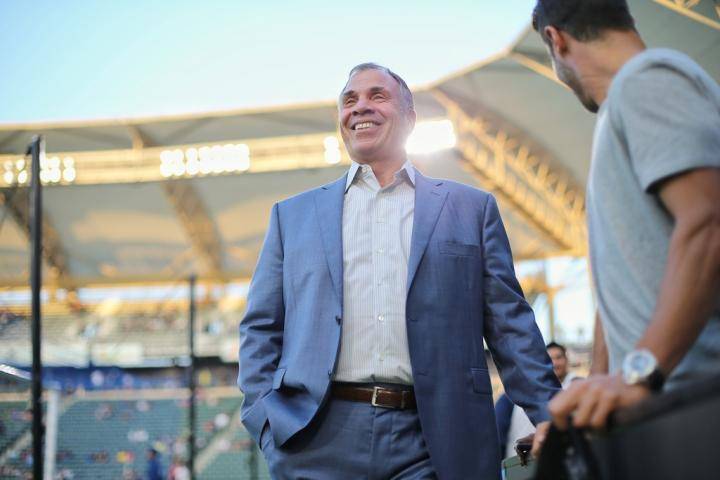 LA Galaxy to Play the Columbus Crew on Saturday

The LA Galaxy will play the Columbus Crew on Saturday, September 3, 2016 at 7:30 p.m., at StubHub Center. The Galaxy will be without the services of a number of players: midfielder Nigel de Jong recently departed the Galaxy to join Turkish side Galatasaray, Gyasi Zardes will miss the rest of the regular season with a broken foot, midfielder Steven Gerrard is out with a sore hamstring, and center back Jelle Van Damme is expected to miss at least two weeks with a sprained medial collateral ligament in his left knee. Additionally, Robbie Keane is returning from his last international match and may not dress for the game.

The Galaxy fanbase has been battered with one loss after another recently and fan morale has fallen precipitously in the past month. The team went winless in August and just lost one of its best players, Nigel de Jong, for reasons that are not clear to the team’s fans.

But the Crew are also dealing with absences. Four of its players (Harrison Afful, Justin Meram, Tony Tchani and Rodrigo Saravia) are away on international duty while two of its players (Federico Higuain and Will Trapp) are out with injuries.

Columbus Crew Sporting Director, Gregg Berhalter, former LA Galaxy Player and Player/Coach (with the LA Galaxy from 2009-2011), will make his first trip back to Los Angeles and StubHub Center since joining Columbus. Berhalter was a great addition to a surprise title contender in 2009 and is generally revered for what he was able to do with young defenders AJ DeLaGarza and Omar Gonzalez.

Berhlater, when speaking to Nick Clarkson of ColumbusCrewSC.com about his teams’ absences said “With the international call-ups, a couple injuries, we’re going to have to play a different lineup than last week — and that’s fine.” He continued, “I think it will give guys a chance that have been working all year to get on the field. We know we have a quality squad, and now is the chance to show it.”

Also returning to play against LA is former Galaxy player Hector Jimenez. Jimenez Has played in 17 games for Columbus this year with 8 of those games being starts. Since Joining the Crew from the Galaxy in 2014, he’s amassed over 3,500 minutes and has 1 goal and 10 assists.

The LA Galaxy are winless in their last six games whereas Columbus is coming off a 2-0 win over the San Jose Earthquakes and have won two of their last three games. In their most previous matchup these two teams tied 1-1 in Columbus back in 2015. The last time they met in Carson, LA came out victorious 2-1 (July 4, 2013).

Many changes are expected for the Galaxy, and this will be first game to really feel out what this team can offer, minus the services of so many key players.

“It’s still a situation where other guys now get opportunities, other guys step up. We’ve built a deep roster this year, so there’s no panic buttons being pushed at all,” said Associate Head Coach Dave Sarachan, when speaking with FourFourTwo.com’s Scott French.

In many ways this could be a new beginning for the LA Galaxy. But if players can’t fill in, for those now missing, it could also be a rough end in what would be another disappointing season.

The game will be aired on TWC SportsNet and TWC Deportes, with Coverage at 7:30 PM.