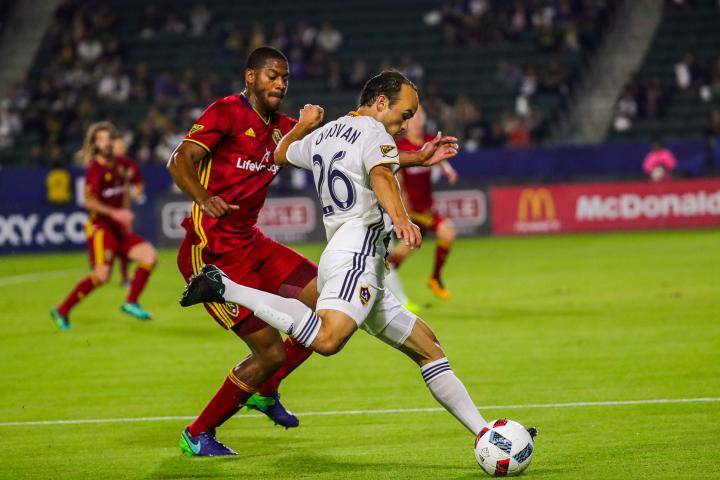 On Landon Donovan’s Return: When a Player Knows Age is Just a Meaningless Number.

Age is a meaningless number.

Landon Donovan was one of the final players to sure-footedly make his way across the pitch after Wednesday’s knockout round 3-1 rout of Real Salt Lake. Without hesitation, he approached the patient fans eagerly waiting for autographs from their beloved LA Galaxy champion, who’d just made his third consecutive start for the LA Galaxy and completed 87 minutes of play along with an assist. It was another solid performance from Donovan – after playing a full 90′ only three days earlier during the LA Galaxy’s game against FC Dallas, Donovan has proved that he’s more than equipped to climb the steep re-learning curve he’s faced since returning to MLS.

The years are peeling off Landon's shoulders. It's like the playoffs are his fountain of youth. #LAvRSL #LegenD

Sometimes people joke about extra time in soccer as bonus soccer. LA Galaxy fans are now enjoying bonus Landon Donovan soccer – for these fans, there is no price tag one could put on such a valuable asset.  Spectators can tell Donovan, too, is savoring these fleeting moments. He is comfortable and happy, enjoying the game in a way that fans have longed to see, something that fans have not seen in several years. Even with an MLS Cup trophy in hand, the specter of the 2014 World Cup snub and the resulting media backlash against Jurgen Klinsmann loomed over his head in 2014, often fomented by his own artful openness. Thus, in spite of a touted farewell tour full of gifts and glory, it was still a bittersweet goodbye where politics uncomfortably commingled with sport sapping it of its simple beauty. But against the odds, Donovan has returned to a clean slate in 2016 and, in a very tangible way, is on a quest for a sixth trophy with LA.

That quest seems even more likely after last night’s concerted team effort, an evening that also marked 35-year-old Alan Gordon’s goal and two assists in his first-ever career playoff start, and youthful Emmanuel Boateng’s supercharged brace in his first playoff match. If the night proved one thing, it’s that age is a meaningless number. It’s what you do with the experiences you have had that matters. Donovan appears to be writing a new farewell tour on his own terms, something that his fans have longed for all along.

It hasn’t even been two months since Donovan returned to his old haunt. He intentionally kept expectations low from the get-go, continually referring to his lack of match fitness, the advancements in the league his since departure and that his most likely contribution to the LA Galaxy being strictly ‘locker room’ talks — a Donovan help desk at the ready. He’s been content to try to contribute to the team’s goal of an MLS Cup run but was leading a satisfying life outside of soccer so the pressure really wasn’t on him. That’s a truism about life and the career of Landon Donovan. Perspective teaches that any given season is not life or death and losses do not bar happiness in life. If Landon does not succeed on the field, he will still return home to the inner content he found by letting go of the game two years ago. He was not lured back by money – Donovan has turned his nose up at lucrative offers on more than one occasion during his career.  Nor does he care for fame, preferring always to idle on the beaches of his hometown in lieu of Hollywood’s fanfare.  The opportunity to be back in the game without the huge weight of having to carry the team and the entirety of American soccer was no doubt appealing. The things that brought him back were a pure love of the game, his coaches, his teammates and his team.

Landon’s teammates acknowledge the contribution he’s already made behind the scenes. He readily offers advice, probably whether it’s asked for or not. The star of last night, Ema Boateng, credits Donovan for his second goal. “He talked to me about [switching sides] during practice and said it’s good to give the defense a little different look. I think it helped and we got the third goal on the ball from that side,” Boateng explains. “I’ve just got to keep listening to that guy. I think he knows what he’s doing.” And while Donovan continues on this rare adventure, his teammates have grown with him. There’s a team mental shift that became visible on the pitch last night.

“I think that’s a team we’ve been playing with over the last 2-3 weeks getting them ready for the playoffs,….They’ve been training together and they know each other and each other’s responsibilities. I thought they played in a very cohesive manner. This is the best collective effort we’ve had in a while. I was pleased.” – Bruce Arena, on last night’s performance

Cohesive, and at times, even elegant, are words that readily capture the team effort that a crowd of 18,124 at the StubHub Center witnessed Wednesday night. It may be true but is has not manifested in the form of an emphatic win in a while, in spite of a third-place finish in the Western Conference.

It's quite incredible that @landondonovan is even in a position to start a playoff game. Amazing accomplishment after not playing for 2 yrs

Landon has taken on a leadership role in post-game pressers over the last month, often painting a larger picture, pointing out mistakes on a scale and with a refreshing intellectual honesty that has been lacking all season. Not that this is surprising. Landon has worked as an analyst and brings a depth of insight and transparency that is rare to find in players. But last night his prowess on the pitch stole the show. There were no flashy goals of his own. But he helped direct the first goal, hit a MLS record of 15 playoff assists and was often seen directing the play, either with his own feet or with cues to his teammates, and he played almost an entire 90-minute match a mere 3 days after his first full match since returning to professional soccer.

Giovani dos Santos given the start next to Landon Donovan. Never thought I would ever say that. https://t.co/5HyXksrFTP

Though Jelle Van Damme, remarkable in his own right, wore the captain’s armband, it was almost like a glow of confidence emanated from Donovan and eventually encompassed his teammates, including even the team’s new number 10, Giovani dos Santos.  There wasn’t a glint of jealousy or rivalry between the two players either during or after the game. How could there be? Landon isn’t here to steal the light: like a concave lens he appears to be redirecting it so it shines on his teammates. The calm that exuded from him after last night wasn’t because he was proud of himself. He’s happy with the rest of the team finally proving what he has been witness to over the past 3 weeks.

“I know from a results standpoint, to you guys, it seems like this was flipping a switch tonight. But we’ve seen this over three weeks. And we’ve seen it in training and we’ve seen it in the way we played, and even though the offensive part didn’t come together in Houston and Dallas the way we wanted, we were building towards it and we could see it in training. So tonight we got rewarded in a big way. And everybody came to play in that way,…And when we have that, we’re very dangerous. On a night where Gio was excellent but relatively quiet on the scoresheet and Robbie Keane is still getting back to fitness, imagine where we’ll be when those pieces come together. We’re happy with where we’re at and we think we’re going to get better.” – Landon Donovan, after last night’s game

Donovan began this ‘second wind’ tour on September 11th with a mere seven minute show where fans were more than willing to cheer him on for the simple act of jogging in warmups, but he then went on to play 16 minutes a week later in Kansas City scoring his first (and still only) goal of the year. Since that point his playing time and strategic passing completion rates have incrementally gone up to the point where now he’s able to make two starts with just two days rest. Regardless of age, who else could accomplish that?

Bruce Arena, who’s openly shown exasperation at just keeping the team’s head above water with the frequent injuries, absences and unplanned departures of the regular season leading up to today, wryly commented on the team’s struggles during the post-game press conference as follows:

“We actually did something right this year. We progressed Landon in the right way to where he’s ready now to play regular minutes and did it in the right manner. And as he got fitter and sharper you can see that his intelligence, his ability to communicate, his technical ability is something unique and something we haven’t had. And I think he really complements the group. He’s not the same player he was 10 years ago, but he’s still a pretty damn good player. I think being able to add him to the group and get him to where he is today is going to hopefully make us a better team.”

While it’s concerning to realize that in Donovan’s absence there was a hole in leadership, communication and technical field intelligence for LA, it’s a tall order for any one player to fill.  This is a rare instance when Landon’s talent met Arena’s need perfectly – complementing the team and complimenting his teammates when called upon. The confusion surrounding Donovan’s de-retirement (un-retirement?) and worries about whether he would fit into the team have fallen by the wayside. Donovan naturally fit back into the puzzle, even if it meant rearranging it slightly to give it a playoff-ready look. Through all the years there’s one thing on his mind though that has remained a constant, and it’s the drive of a winning mentality.  “At this point in my life winning is what feels best. Whatever I need to do to make that happen is what I want to do. A lot of guys put in performances like that tonight where it doesn’t look spectacular when you look at it but when you put all those together and add it all up that’s how you win games.”

Many hands, or in this case, feet, make for light work.