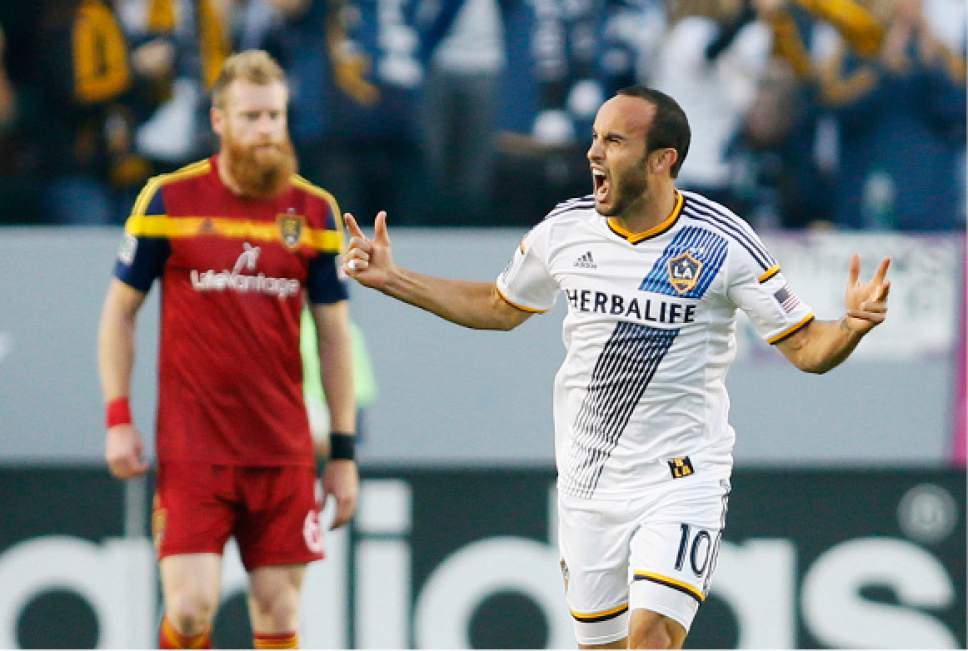 A 2014 Western Conference postseason rivalry heats up again tonight in the knockout round of the 2016 MLS Playoffs when 3rd place LA Galaxy (12-6-16) host their neighbors from the Beehive State, Real Salt Lake (12-12-10) who finished off the regular season in 6th place, in a winner-takes-all match. Tonight will be the Galaxy’s first playoff game at home since winning the 2014 MLS Cup.  The winner will face the 2nd place Colorado Rapids this Sunday. If LA beats RSL, it’ll host the first-leg of the playoffs’ second round against a confident Colorado that has erased their past as repeated bottom-dwellers in the West with an undefeated home record, a crowning glory that the Galaxy used to share as well. One thing is for sure – tonight will not be a repeat of September 7th’s game between these teams – their last matchup in the regular season resulted in a highly contested 3-3 draw that saw LA’s MVP, Giovani dos Santos, performing at his absolute best, earning a brace and an assist. That draw felt more like a defeat for LA as they wasted the 3-1 lead in the 67th and 94th minutes. In spite of all the rhetoric that the post-season is a different animal than the playoffs, this is a chance for redemption and the LA Galaxy are no doubt hoping to win at home (for the first time since September 11th) in front of fans who have grown impatient with the team’s disappointing performances. The Galaxy’s three DP’s have been absent for much of the past month.

Bruce Arena once opined that, in order for an MLS team to go deep in the playoffs, the Designated Players on that team need to step up to the plate and perform at their best. If Arena is correct, then the Galaxy’s fortunes may end early in the post-season, as the Galaxy’s three DP’s have been absent from the team for much of the past month, thereby putting the team’s fortunes on the backs of stalwart players like Jelle VanDamme, AJ DeLaGarza and Sebastian Lletget. In fact, given that LA’s DP’s have been in the wind, the Galaxy have actually performed reasonably well, and a number of factors favor the Galaxy performing well tonight.  Beyond the obvious home-field advantage, a number of starters are rested thanks to the reserves who were up to the task of hosting FC Dallas and holding them to a scoreless draw on Sunday.  Giovani dos Santos is ready and in a confident mindset worthy of a goal-scoring leader who recently returned from international duty, having revived his role a crucial player for El Tri. Robbie Keane is set to play tonight though it’s unclear what his contract negotiation status is and what, if any, impact it will have on his performance. Ashley Cole, the Galaxy’s excellent left back this season, is a likely starter, and between A.J. DeLaGarza and Daniel Steres, Jelle Van Damme (one of the stars of Sunday’s game and Defender of the Year for the Galaxy) will have a reliable partner. DeLaGarza patiently prepared at training yesterday for tonight’s game and admits he and Vandamme are still learning how to play off one another.  Regardless, AJ says he will be ready for tonight’s game:

“I was in the last three games but missed [starting] a whole month before that. You’ve got to be ready when your number’s called. I’ve been switched around from position to position.” – AJ DeLaGarza, at training in preparation for tonight’s game

In addition to DeLaGarza, Robbie Rogers, Gyasi Zardes, Sebastian Lletget, Steven Gerrard, Robbie Keane and others, there’s one seasoned veteran in particular who is helping the team settle into the post-season. Landon Donovan, who played his first full 90-minute match this season on Sunday (far more quickly than first anticipated) has clearly had an effect on the locker room. Few have admitted it outright, but many players have alluded to the impact his presence has had on the team during the past month. Though fans will likely not see him start and play another full match so soon after this weekend’s game against Dallas, it’s likely he will be called upon as a substitute, especially if confidence on the pitch starts to falter. Donovan readily admits his fitness boost has reached playoffs levels and that the performance level of the Galaxy has grown in that time period as well.

“I felt not old… I felt like I wasn’t thinking about my fitness anymore. So that was good,… I think the last three weeks have been really good. What hasn’t shown up yet is the quality in the attacking third and when you’re missing, last week, two of your best attacking players in Robbie Keane and Steven Gerrard and today all three of them with Giovani Dos Santos…it’s going to be hard to create real chances. But I think when you look at the way we play, the ability to not give away too many chances and just the effort…we have a chance. Now we need to make plays on the other end of the field,” – Landon Donovan, at practice preparing for tonight’s game

Steven Gerrard is not expected to be in tonight’s lineup – he wasn’t seen on the pitch in practice Monday, although he was spotted Tuesday practicing with his teammates. Head coach Bruce Arena insists both Keane and Gerrard are fit to play though his final decision will be made on game day regarding whether they should do so having not done so recently. In such a critical game, relying on a rusty midfielder is a risky gamble. It’s more likely Gerrard will play Sunday if the Galaxy reach that stage. Gyasi Zardes won’t be in the lineup either but he’s still on track with his recovery and may play a role in the team if they do advance to the final. Keane is expected to be a starter in what may be his final match for the LA Galaxy. He will be out to prove himself worthy of a new contract, which could be a great thing if he can pull off a turnaround tonight, or a terrible thing if his rust is evident on the field and/or if he becomes obviously frustrated during the game.

“My responsibility on the pitch is to create chances, sometimes to score goals. I think everyone knows what they have to do.” – Robbie Keane

When asked about Real Salt Lake having the obvious drawback of playing on the road and not having the same rest as many LA Galaxy players, Dos Santos countered, “They have a solid team. It’s a different game. It’s more about mentality and motivation.” One can expect both teams to be putting forth their best effort tonight which means there will be lots of action in the boxes. The role of both teams’ goalkeepers may be pivotal. In this case, it will be the extensively battle-tested Nick Rimando versus Brian Rowe, who has no post-season experience. The Galaxy have had just one clean sheet since the end of August.

This year has been a test for Bruce Arena and his squad with multiple injury spells and international duty absences along with a long run in the U.S. Open Cup. He’s had to rely on the depth of the reserves and younger players, giving them the experience they needed to hold their own when called upon, as in Sunday’s game against FC Dallas. That’s not a bad thing given the way MLS is structured. In Arena’s opinion, consistency is more difficult to accomplish in the league compared to teams with lasting legacies like FC Barcelona. This is not the same LA Galaxy that won the 2014 Cup. This is also not the Galaxy of 2015 that crashed out of the playoffs in Seattle in the knockout round of the playoffs. In an effort to build an LA Galaxy team capable of winning the 2016 MLS Cup, Arena has hit some snags in the form of unexpected losses, aquisitions and injuries. Yet, anything is still within the realm of possibility.

“If you look around the world at top club teams, obviously their teams are put together for 5-10 years. They’re pretty consistent. In our league you can’t do that because of the salary cap and other issues. We lose players every year. You can’t keep a team together,” Arena contests. “The clearest examples of that are the two teams that were in the MLS Cup Final last year didn’t make the playoffs. You can’t tell me it’s not because of the characteristics our league has… We’ve kept our heads above water. We’re somewhat consistent. We’ll see how the year plays out.” – Bruce Arena

LA have the upperhand tonight but a struggling RSL will be bringing their best for their last chance at glory in 2016, including the experience of Nick Rimando, Kyle Beckerman, Yura Movsisyan, Joao Plata and a defensive line that knows LA’s tricks well. In the words of one who knows best, Landon Donovan summed it up as follows, “this is a game that’s going to be a real test for us and we know that.”

The game starts at 7:30 p.m. Due to the fact that Cal State University, Dominguez Hills has classes on Wednesday, no parking will be available on the CSUDH Campus, including the $5 parking lots. All fans are encouraged to enter StubHub Center through Gates A, B, D or I. StubHub Center Parking Gates A & D will open at 12 p.m. PT with additional parking gates set to open at 4 p.m. PT and tailgating is allowed. StubHub Center stadium gates will open at 6 p.m. PT.

The game will be aired on UniMás and Spectrum Sportsnet.