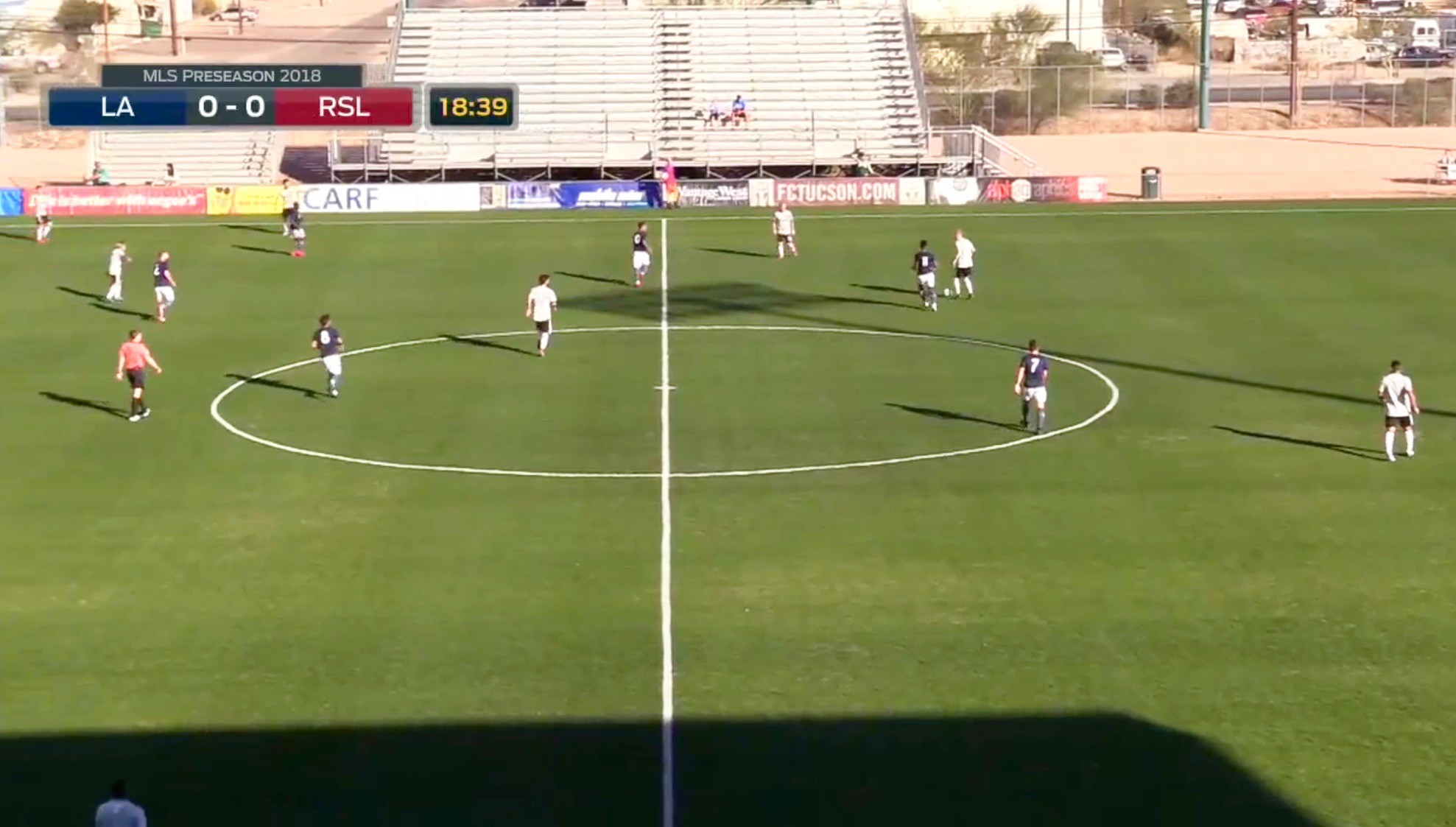 Under the always-shining sun of Tucson, Arizona, the LA Galaxy got their first minutes of the 2018 preseason in a 3-1 loss to Real Salt Lake on Saturday.

And while the Galaxy fielded three separate 11-man rosters for 30-minutes each, and RSL fielded two different lineups on either side of the half, there were still some important, positive takeaways from the Galaxy’s perspective.

The Galaxy lined up with Bingham in goal, Ashley Cole at left back, Skjelvic and Daniel Steres at center back, and Feltscher at right back. In front of them sat Kitchen in the defensive midfield role, with Jonathan dos Santos in front of him. Romain Alessandrini manned the right wing with Emmanuel Boateng making his opposite on the left. Giovani dos Santos took up a position underneath Kamara who was left to be the loan attacker up top. And for those of you wondering about Sebastian Lletget, he played the second 30-minutes in the midfield and did just fine. But Schmid is going to be cautious with him and this may mean he doesn’t start to begin the season.

The Galaxy faced off against, what should be considered, Real Salt Lake’s A-Team. And while RSL was missing a few players for precautionary reasons, they were all up to the task.

But what should interest Galaxy supporters is the overall dominance the Galaxy displayed for the majority of that first period.

The real star for the Galaxy was Kitchen, who joined the team from Denmark in the offseason. With Kitchen, the Galaxy have a true defensive midfielder and his quality was on display early and often. He was quick to the ball, wasn’t afraid to foul – picked up a yellow card in the 11th-minute – and turned in some bits of skill that saw the Galaxy break forward on a couple of occasions.

His defensive grit was a welcomed addition to the team and he kept Jonathan dos Santos from tracking back too far or being pointed away from goal too often. This allowed Jonathan to combine with his brother, Giovani dos Santos, and really forced the Galaxy forward on more than a few attacks.

Giovani dos Santos was also kept busy because of Kitchen and found himself open underneath the space created by Kamara.

The defense had its shaky moments, but both Feltscher and Cole found themselves pressed into the attack on more than one experimental run forward.

Steres and Skjelvic did okay together, but it’s saying something that Schmid went with Steres over Michael Ciani. This isn’t a surprise and may still hint at the fact the Galaxy could be releasing Ciani if the Zlatan Ibrahimovic rumors are true. Or it could be that Steres was simply the stronger player in training?

Bingham had good and bad moments but still showed skill in making a diving save in one tense moment. And saw another shot – from Joao Plata – ping off the post.

Overall, I think Schmid would have liked for Kamara’s name to get called more often, but the Galaxy still generated some offense. Alessandrini had a header cleared off the line and other promising attacks just missed the mark.

And the Galaxy combined dangerously several times with a mix of possession and quick counterattacking after a sustained build-up from the back. Multiple team elements were on display and that is never a bad thing. The final touch will come.

After 30-minutes the Galaxy’s “starting lineup” exited the field at 0-0 and invited the “second team” onto the field.

Ciani immediately scored on a set piece put in by Lletget and the Galaxy momentarily had the lead against RSL.

Lletget, Ciani, and Chris Pontius showed the most promise during the second 30-minutes with all three looking in-shape and dangerous.

But Schmid should also be impressed with LA Galaxy II’s Efrain Alvarez and Uly Llanez, 15 and 16 respectively. Both players didn’t look out of place on the field. That’s a promising sign for Galaxy supporters concerned with the youth that was released during the offseason.

For Lletget he earned his first minutes since sustaining the Lisfranc injury during a US National Team Call-up in March of last year. He looked solid with his footing, good on his conditioning, and still showed a good touch despite being out of soccer for so long.

If the Galaxy are going to have success in 2018, Lletget may be the reason for it and it doesn’t look like he’s taking the opportunity lightly.

The game may have slipped away from the Galaxy after halftime, but ultimately it was an excellent start to the preseason.

Schmid and the rest of his coaching staff are pushing this team hard in training, with most days seeing the guys on the field in two separate sessions. There was eveidence of tired legs and mental fatigue, but none of that is a bad sign. They’re doing the work they were supposed to do on this trip.

And if going to Tucson was all about conditioning and team-building, the Galaxy came away with a win on the night.

The team will next take the field on February 10, when they host New York City FC at StubHub Center in their scond preseason game of the year.