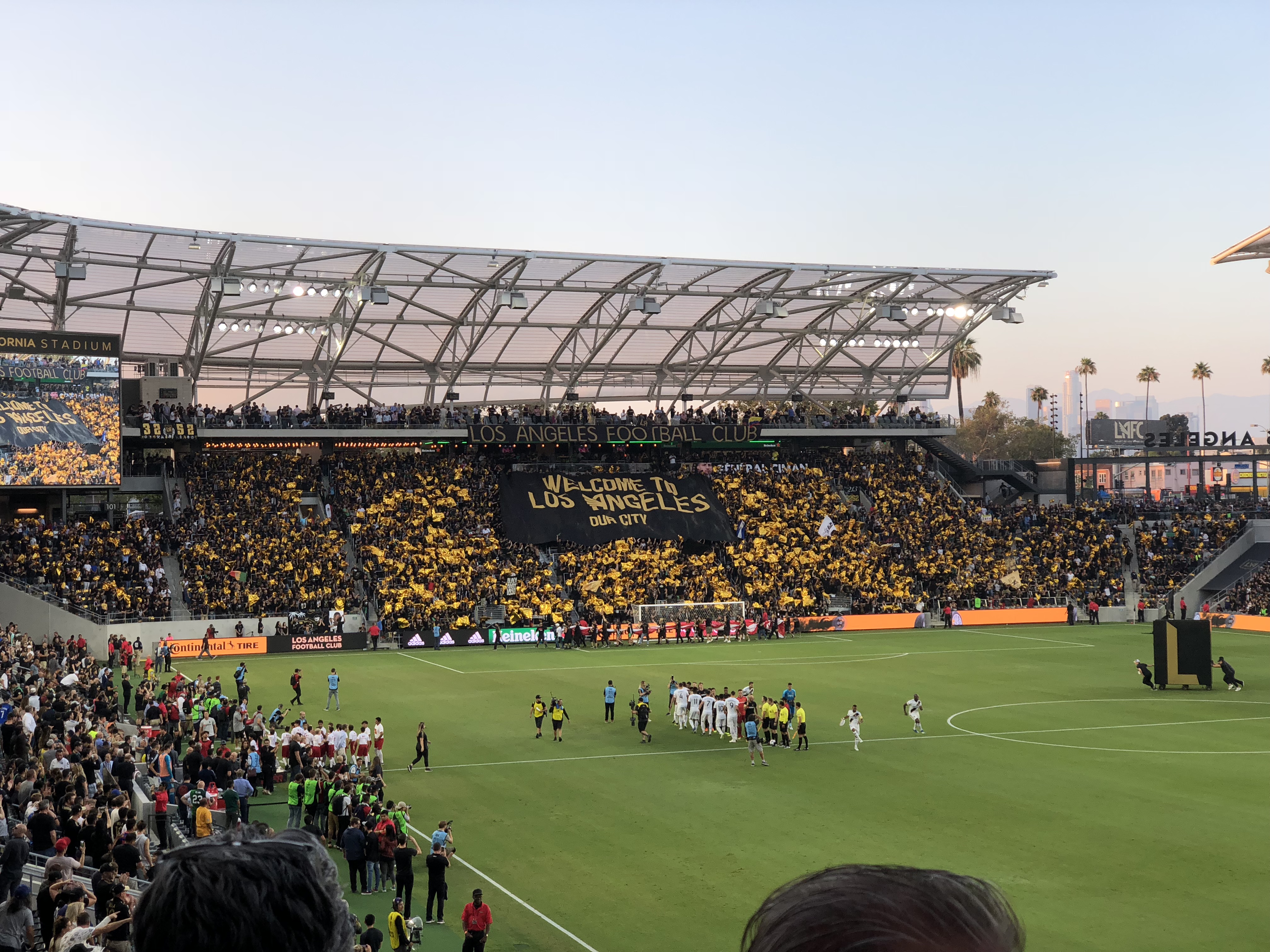 LA Galaxy find some late magic in draw with LAFC

Los Angeles, CA — The LA Galaxy made another miraculous come-back against cross-town rivals Los Angeles Football Club in a 2-2 draw on Thursday night at Banc of California Stadium. Thanks to goals from Galaxy midfielder Romain Alessandrini and striker Ola Kamara the club extended it’s unbeaten streak to eight games and kept them undefeated against their upstart rivals.

The Galaxy (9-7-5) started the match on the back foot, despite having almost every player available to head coach Sigi Schmid. And unlike the first game between these two teams — a 4-3 come-from-behind victory at StubHub Center on March 31 — all three of the Galaxy’s Designated Players were available and started in the match.

LAFC (10-5-6) came into the game going 2-1-2 in the last five games and were trying to rebound from a 5-1 loss to Minnesota. And for more than 80 minutes of the match, they were very successful in doing so.

The Galaxy’s scoring came in one short spurt some 82 minutes into the match after already having been trailing for all but six minutes of the game.

That’s when Alessandrini — who switched to the left side after Schmid brought on Chris Pontius in the 64-minute — received a pass from Zlatan Ibrahimovic inside the box. Ibrahimovic had been pressuring LAFC defender Walker Zimmerman for most of the night and, unfortunately for Zimmerman, he misplayed a bouncing ball allowing the superstar Swede to get the cross into Alessandrini.

Alessandrini ran away from defender Steven Beitashour from left to right and fired a right-footed shot back across the goal glancing by Laurent Ciman and past goalkeeper Tyler Miller.

On the kickoff the Galaxy once again attacked. Forcing LAFC deep into their own half with a flurry of moves.

A looping cross from Jonathan dos Santos would catch LAFC sleeping on defense and would put Ibrahimovic in on goal. He would bring the ball down perfectly, but instead of shooting from just a few yards from goal, he would pass to Kamara.

Kamara seemed to have all the time in the world, but Miller would quickly shift his weight and block Kamara’s shot near the goal line.

It was a save that should have seen LAFC keep the 2-1 advantage. But Kamara would get another chance to redeem himself. But it wouldn’t come off some great play.

Instead, it would be a self-destructing pass from LAFC substitute André Horta — who was making his MLS debut. Horta attempted a back pass to Miller from inside the attacking half. But Kamara, who said he was trying to hide from the Gaze of Horta, was able to intercept the pass, round Miller, evade Ciman, and score the game-tying goal in the 86-minute of the match.

However, it was a game that never should have gotten that close. LAFC dominated most of the dangerous chances throughout the game and saw their shots ping off the goal posts twice and saw deflected shots barely miss the frame.

At times LAFC had the Galaxy defense tying itself in knots. With Galaxy captain Ashley Cole looking slow and reactive, and Dave Romney looking overrun on the outside. In particular, Latif Blessing pressed all the right buttons and was constantly chopped down and fouled as the Galaxy’s midfield attempted to slow them down.

Carlos Vela exploded for the first goal of the evening in the 7-minute of the game. That’s when he received a cross from Adama Dionmande who had just chased down a Vela cross that barely missed the mark.

Michael Ciani didn’t track the run of Vela to the near post and Jorgen Skjelvik left too much space behind him. It was a classic defensive letdown from the Galaxy and something that Schmid will never be pleased with.

So when the second goal hit the back of the net off a set piece from LAFC’s Lee Nguyen in the 20-minute, you could once again point to a poor bit of defense from the Galaxy, although only by the slimmest of margins.

That’s when Perry Kitchen, in an attempt to win a poor clearance back from LAFC nicked the heel of Mark-Anthony Kaye. Kaye’s ankle would roll violently and the midfielder would have to be subbed. But the free kick would be unleashed almost immediately as Eduard Atuesta replaced Kaye on the field. Nguyen’s free kick tucked inside the left post and put LAFC up for what should have been their first win in the series.

But after Alessandrini scored the goal in the final minutes of the game, heads dropped and the defense got more tired. LAFC’s central midfield stopped possessing the ball and the Galaxy took advantage of that.

It will be remembered as another entertaining match that was far from perfect by either team, but the Galaxy don’t care. They feel as if they’re inside the heads of LAFC and that suits them just fine.

The club will have to quickly move on from the high energy and excitement of this game as they’ll face off against Orlando on Sunday afternoon at StubHub Center (6:30 p.m.; FS1). A game the Galaxy should take all three points from and continue their second-half run for the playoffs.