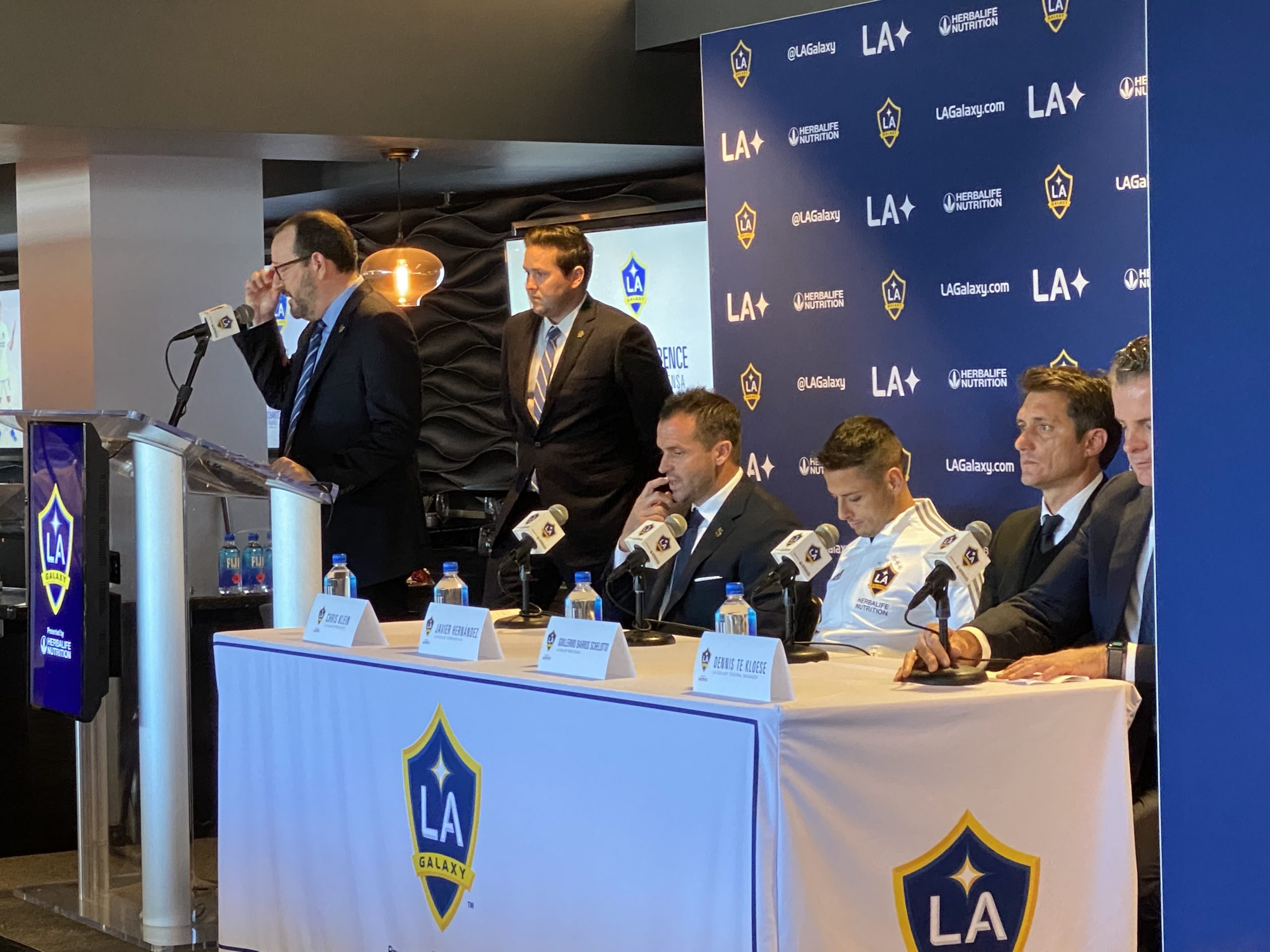 ‘Grateful’ Chicharito eager to get started with Galaxy

“Being the Galaxy,” he told an overflow crowd of media at Dignity Health Sports Park, “we get to make big decisions and make big moves. We get to come up with a wish list and it doesn’t always work out, but more often for the Galaxy it does and today it did.”

The regular season doesn’t start for the Galaxy until Feb. 29 in Houston, but the excitement surrounding the club already is building to proportions not often seen in these parts. It was evident for Hernandez’s Wednesday night arrival at Los Angeles International Airport, where hundreds of fans welcomed him to Southern California, and it continued at not only Thursday’s training session — Hernandez’s first with his new club — but at the ensuing conference which attracted one of the biggest press turnouts in recent memory.

Galaxy officials understandably were thrilled to have secured Hernandez’s services from Spanish side Sevilla to a three-year contract (with a fourth-year option) worth at least $6 million a season — “We’re very, very excited,” general manager Dennis te Kloese said — and Hernandez returned the sentiment.

“There were a lot of people involved to create this opportunity and make it happen,” Hernandez said. “I’m very pleased, grateful and completely sure of the effort to come here.

“I’m going to give my best for all of you and give back that confidence you put in me. Hopefully, we can achieve that championship we are looking for and put one more star in the bank of this club.”

What the Galaxy are getting in the 31-year-old Hernandez is a player who has played in more than 400 matches in a career that has included stops in Mexico, England and Spain. He’s also appeared in more than 100 matches for Mexico’s national team and is that country’s all-time leading scorer.

Hernandez joined Spanish side Sevilla last September and went to appear in 15 matches for the club across all competitions. Te Kloese, who has known Hernandez since his youth days at Chivas Guadalajara, was on the lookout for a successor to the departed Zlatan Ibrahimovic (now with AC Milan) and initiated contact with the Mexican international earlier this month.

Te Kloese knew time was at a premium, with the FIFA winter transfer window opening on Jan. 1 and closing on Jan. 31, but he still managed to get the transaction done.

“This is not an easy period sometimes,” te Kloese admitted, “but we are very proud and we have great confidence this is going to be an enormous success for our club.”

Hernandez said Thursday’s media turnout was an indication of the impact he will have on not only the Galaxy and MLS but on Southern California’s Mexican-American community.

“You can see this room how full it is,” he said. “You see all the belief people have in me, all the value they give me. Speaking about the effort they made to bring me here speaks a lot about that value and respect and that admiration they have in me, and the confidence especially. So why not take this opportunity? I’m going to be doing what I’ve been loving since I was in the belly of my mother … football, football, football. I love that.

“It’s not like I’m very selfish coming here, getting my goals, getting my attention and then I leave,” he went on. “That’s never going to happen. I’m very emotional. Right now I am because it’s a very important move for MLS and my career. I’m very glad and happy this came true.”

Hernandez did want to clear one thing up. He earlier was quoted as saying his jump to the Galaxy was the so-called beginning of his retirement, but he begged to differ.

“In my country, we love and are obsessed with drama,” he said. “When you say retirement … they don’t really listen. This retirement could last 10 years. You never know. We’ll see how long it’s going to be.

“Hopefully that will last so long, then I will retire at 40 playing in … Australia. I think sometimes they don’t really listen. Retirement, yes, but I want to make that retirement as great as I can.”