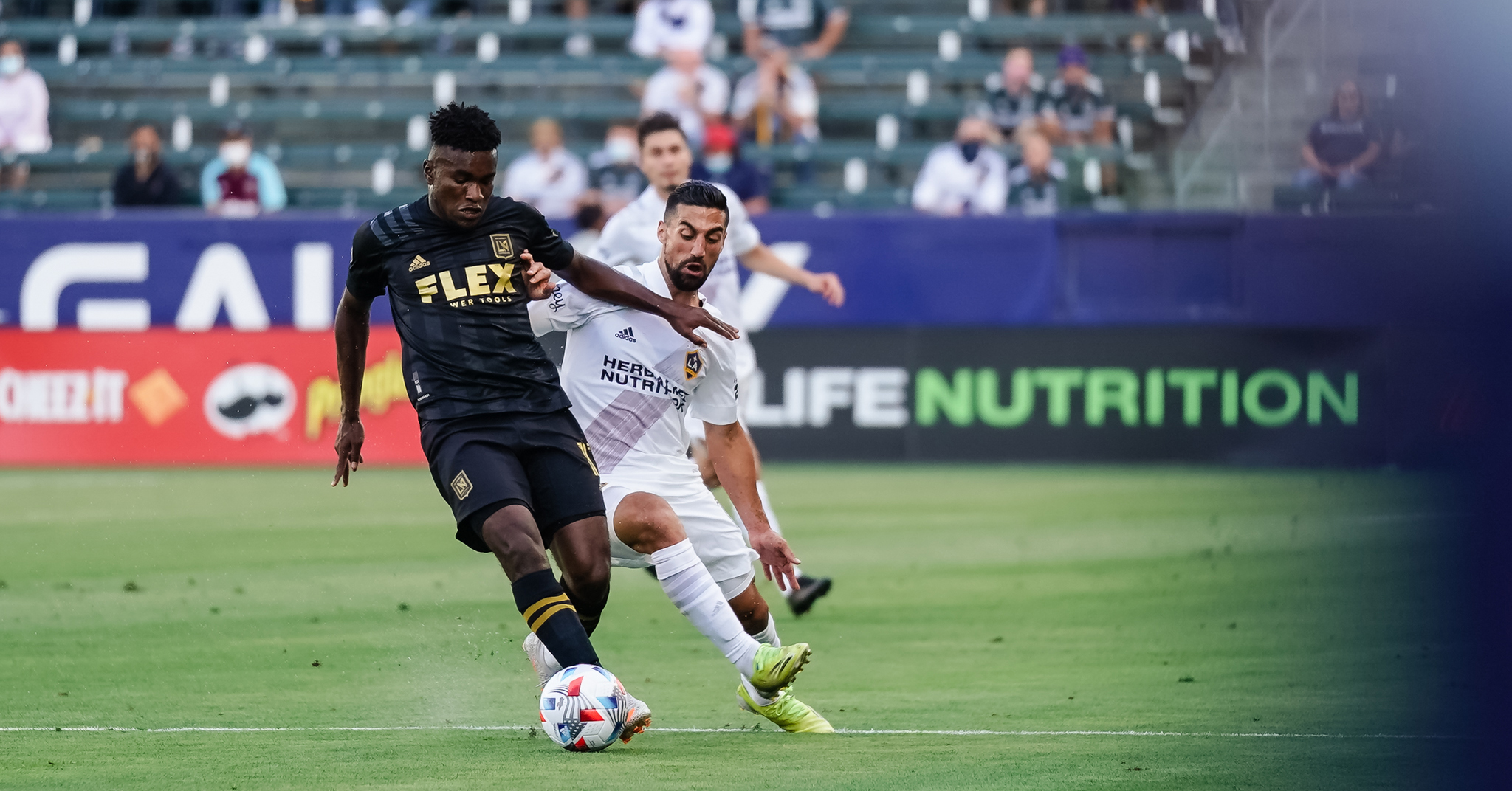 Dignity Health Sports Park opened its doors for the first El Tráfico with fans in attendance since the 2019 MLS Cup Playoffs. Much of the anticipation leading up to the match was surrounding the “Battle of Mexican Superstars,” but only one team delivered on that narrative as Javier “Chicharito” Hernandez and Jonathan dos Santos walked away with a goal apiece to give the LA Galaxy a much-needed 2-1 win early in the season.

While the Mexican duo of Hernandez and dos Santos will receive the plaudits for scoring the goals, the LA Galaxy defense took a step forward as they showed that they were able to withstand a lot of pressure from an LAFC team that dominated possession on the stat sheet. However, the saying “the game isn’t played on paper” rang true as Jonathan Bond and the back line frustrated the opposition on multiple occasions and eventually set up the Galaxy offense to capitalize on their chances.

The Galaxy are yet to put out their best possible XI but has still somehow managed to bag nine points out of a possible 12. Greg Vanney deserves much of the credit as he seems to be pressing all of the right buttons to get the most out of the players he is calling upon. A win in a rivalry game is sure to keep team confidence at a high as their battle to stay near the top of the standings in the Western Conference continues.

Julian Araujo came into this El Tráfico looking like a player who missed some of the preseason and was looking to find his footing in the starting lineup. By the end of the match, Araujo looked very much like a highly touted prospect as he came up in some very key moments to help the Galaxy earn their win.

Araujo continues to show up for the big games and needed to do so as LAFC were targeting his side of the field early on in the first half. Araujo led all players in tackles (6) and duels won (11) while maintaining a physical presence that has been shown to be effective against these rivals.

While Araujo’s versatility is valued when shifting to a midfield role, he showed in this match that his highest ceiling is playing in the right-back position. A performance like this could be the catalyst for staying on a forward trajectory for the Lompoc native.

Jonathan Bond only needed to make four saves on the afternoon and allowed one goal, which may raise some eyebrows on why Bond would earn a five-star rating. However, as previous weeks have let me down, the stats only tell part of the story.

Bond’s performance was highlighted by an incredible double save in the first half to keep the Galaxy ahead going into halftime. But perhaps what has been even more impressive from Bond is his fearlessness to come off of his line in the right moments to kill plays before they have an opportunity to develop. Hence, not registering on the stat sheet.

While leading the league in saves (20) is not a category that the Galaxy will continue to want Bond to lead, he has shown that he can put the defense on his shoulders when needed to keep the Galaxy within striking distance in any match.

He just keeps delivering. Chicharito continues his dream start to the season as he netted a goal and an assist to open his El Tráfico account. Hernandez now leads the MLS Golden Boot race with six goals in four matches showing that his success in the first two matches was no fluke.

Critics may call out the types of goals for not being “golazos”, but this is exactly where Hernandez thrives — finding himself in the right place in the right time to either score himself or set up his teammates. Hernandez needs to keep doing exactly what he’s been doing during the opening matches and the goals will continue to come.

The Chicharito redemption season (#RedemptionSZN) is in full effect.

Much like Araujo, Jonathan dos Santos hadn’t taken control of a game as has been expected from the midfield general and up until the 79th minute, it looked like it was going to be another quiet game from the Galaxy captain. BUT, when you score a game-winning goal against your crosstown rivals late in the match, it automatically elevates your status.

There were early moments where dos Santos looked active, but there were also moments when dos Santos disappeared when the Galaxy needed to try and regain possession. The performance was reminiscent of a former Galaxy captain, Landon Donovan, who knew exactly when to turn it on in the right moments. And for that, dos Santos should be applauded.

It was clear to see what the goal meant to dos Santos who was visibly emotional post-game. Calling Efrain Alvarez off the ball and earning a yellow card for excessive celebration are both consequences that dos Santos will be happy to deal with. Hopefully, the goal sparks the player that dos Santos has shown the potential to be.

When the LA Galaxy decides to begin selling NFT (Non-fungible tokens) as digital art, there will be a lengthy line of bidders trying to secure the Derrick Williams tackle-assist. The tackle alone puts Williams on the map by contributing to the first Hernandez goal in an El Tráfico. The technique and strength to make that tackle highlight how important Williams will be for the LA Galaxy defense this season.

Williams will need to continue to show consistency on a Galaxy back line that has lacked consistency for the last few seasons. But it is promising to see a player with a strong pedigree showing his leadership and talent which can only help the players around him.

Sebastian Lletget returned to the lineup after serving a two-game suspension for a homophobic slur in a social media post. The Galaxy were clearly missing his contributions to the offense, in particular in the match away at Seattle. In his return, however, Lletget looked a lot like a player that missed a couple of competitive matches.

Perhaps this is no fault of his own, but Lletget will be a key part of the Galaxy offense this season and the expectation is for him to maintain possession or create scoring opportunities. He failed to do that on the afternoon. Now with a game under his belt again, Vanney and company will need to see if he regains the form that he was enjoying with the US Men’s National Team in the off-season.

The good news is that Ethan Zubak (The Chicha Whisperer™) is playing with confidence. The bad news is also that Ethan Zubak is playing with confidence. Much of Zubak’s early success this season has been playing the role to disrupt the defense. Whether it’s barreling into defenders to put them off balance or holding the ball to draw a foul, Zubak’s best contributions have not been from his shooting or technical skill.

An example of this came in the second half when the Galaxy sprung a counter-attack with an advantage of attackers and rather than find an open man, Zubak skied a shot well over the bar. While it is nice to see a player feel confident enough to take the shot in this situation, there is a certain point where it becomes a detriment. Zubak definitely has a role to fill on this team. Remember, Chicharito is yet to score a goal when Zubak is not on the field.

If the player grades were turned in at halftime, Samuel Grandsir would have been the first player to receive a one-star grade this season. Grandsir has struggled in previous matches and looked like he even took a step backward with passes missing the mark and losing the ball in risky areas. Hernandez was even showing disappointed body language and gestures to indicate his frustration with the player.

The second half saw Grandsir finally start to get in the right positions and push the Galaxy on the counter-attack, but his time was cut short when he was subbed off in the 63rd minute. Grandsir’s starting case took a blow when his substitute, 18-year-old Cameron Dunbar, entered the game and made a major impact with his pace and tenacity which led to the game-winning goal. It may be time to consider swapping the game minutes allotted between Grandsir and Dunbar.

In an Instagram story posted after the game, Grandsir showed an energetic locker room celebration before finally showing fellow Frenchman Kevin Cabral enter the room. Hopefully, the addition of a Designated Player who speaks the same language could motivate Grandsir to elevate his game.