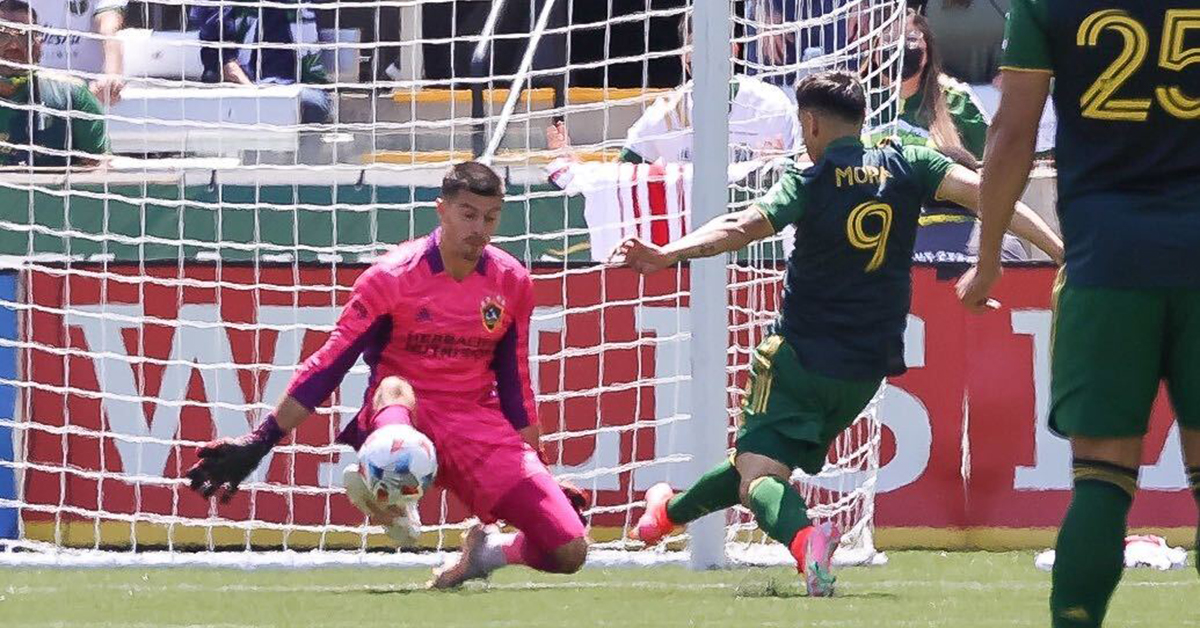 PHOTO COURTESY OF THE LA GALAXY

Derrick Wiliiams’ red card stopped any momentum the LA Galaxy might have been carrying through a solid but indecisive first half.

The LA Galaxy aren’t big fans of playing the Portland Timbers. Whether it’s the turf, the travel, or the Timber’s usually difficult-to-break-down play, the Galaxy have struggled in recent years to punish Portland in any visible way.

But on Saturday afternoon at Providence Park in Portland — a day that started well through the first 44 minutes of the game — the Galaxy’s entire outcome hinged on a ridiculous tackle from Derrick Williams on Portland’s Andy Polo that he was rightfully received a red card for.

Polo had to be helped off the field by the training staff, with Williams walking toward the player tunnel with literally no complaint. And while Williams was, just 45 seconds earlier, assessed for a concussion after a brutal collision with his Jonathan Bond, the nonsensical tackled can’t be blamed on any fog or confusion.

“It’s a tackle that is going to be a red card every single time,” Galaxy head coach Greg Vanney explained on the post-game conference call. “For Derrick, it is almost a delayed reaction and that he probably should have read the play a little bit earlier and been a little bit tighter and could have dealt with it in a different way. Then he saw it happen and was just so committed to the challenge at that point that it just became an amount of force that is just never going to be okay, whether it is this league or any other league.

“It just becomes a challenge that is going to be a red card every time. There were no concerns of a concussion, he was fine in terms of that side of things, and even now, he is fine,” Vanney added.

The disappointment from the Galaxy will be felt primarily because of how they controlled much of the opening 45-minutes and how they squandered those chances with, as Vanney told reporters after the game, “passive possession.” Or possession with no real purpose other than to possess the ball.

Vanney gave Kevin Cabral his first start of the year, placed 18-year-old Efrain Alvarez in the 10-spot, and gave Sebastian Lletget more of a free role next to Jonathan dos Santos in the middle.

What worked for the Galaxy was finding Kevin Cabral wide and letting him take on defenders in isolation as the Timbers did their best to limit Javier Hernandez’s touches on the ball — he had 44 in total but failed to make them overly dangerous. But when Williams was ejected, that forced Cabral into the top of the formation and cut out his wide contributions.

And with the Galaxy being down a man and having to play very narrow, it was a recipe for Portland to quickly take advantage.

The Timbers would score on a cross into the box in the 47th-minute. That’s when Felipe Mora would find space between defenders Daniel Steres and Julian Araujo and easily slot his header home past Bond. The cross was good from Jose Van Rankin, but it wasn’t unstoppable. If Williams had been present and understood the overload coming on the back post, he may have been able to help. But as it was, the Galaxy were now in a hole and chasing the game shorthanded.

The second Portland goal came in the 60th-minute and also be headed into the Goal by Mora. Mora would jump on a rebound that went off the crossbar when Van Rankin tried to chip the ball over Bond, who was scrambling to get to it. Mora reacted faster than substitute Nick DePuy and Bond couldn’t get up fast enough to be of any use.

Diego Valeri would draw a very questionable penalty eight minutes later that showed him taking a heavy touch and then searching out Steres to attempt to make contact with him. He was never getting to the ball, and he initiated the contact, but referee Alan Kelly pointed to the spot anyway. VAR checked the play and decided not to intervene, but commentators on TV and Vanney after the game questioned the call.

“Obviously, it’s a disappointing result,” Lletget told reporters after the game. “I thought in the first half, we had the ball a lot, and that’s obviously the style we want to play, and we want to be threatening. And we just didn’t threaten their backline enough. We didn’t create the types of opportunities that we are trying to build and trying to finish attacks, and that just didn’t happen. So that was just a little bit frustrating.

“To finish the first half with a red card, it’s unfortunate. Once you go down a man, especially against Portland in Portland, it’s going to be a tough game. So very unfortunate.

“But I’d rather have these types of games now and learn from it,” Lletget continued. “And I think there are a lot of things we can look back on and think, we need to do better there. So I’d rather have that happen now than later.”

The Galaxy fell to 4-2-0 on the season and currently hold the third spot in the Western Conference. They’ll stay there even as the first-place Seattle Sounders have a chance at extending their lead in their match against Atlanta United on Sunday.

“I thought in the first half, we were okay,” Vanney said. “I didn’t feel like we were in a position to lose the game.

“I thought our problems were really of our own making in the first half. It was too much possession for the sake of possession and not enough organizing our attacks and trying to finish attacks and attacking the opposition. So because we were so, in a way, passive with our possession, we were playing into the counter-attacking team. I thought that became a little bit of our problem.

“And then the tackle happens, and the game changes, and it’s flipped on its head immediately.”

The Galaxy will host the San Jose Earthquakes on Saturday, May 29 (4 PM on Unimas). They’ll be doing it without Williams, who will be serving his first of what should be a multi-game suspension, and they’ll be doing it without Lletget (USMNT call-up). Vanney is hopeful that their two other signings coming from France — Sega Coulibaly and Rayan Raveloson — will arrive sooner rather than later.