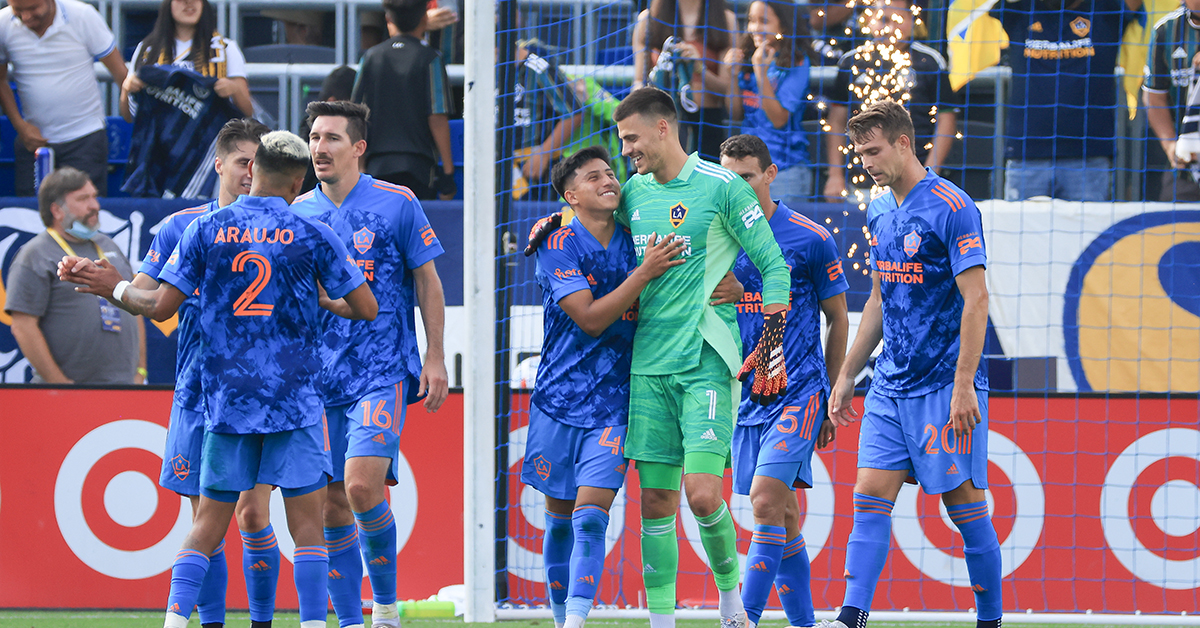 LA Galaxy can’t capitalize on all but one chance as goalkeeper Jonathan Bond puts on a masterclass in front of net.

The Galaxy enter the three-week international break with five victories in seven games and sit in third place in the Western Conference standings, just two points behind pace-setting Seattle.

Yes, things are much different than they have been lately for the five-time MLS Cup champions who are thriving under first-year head coach Greg Vanney and recorded their second consecutive shutout at home on Saturday, a 1-0 victory over the San Jose Earthquakes in the California Clasico in front of a Dignity Health Sports Park crowd of 7,193.

Things are going so well that the Galaxy scored the game-winner on what officially was recorded as an own goal in the 70th minute on a brilliant effort by Samuel Grandsir, whose attempted pass across the goal mouth to Javier “Chicharito” Hernandez instead was deflected into the San Jose net by the Earthquakes’ Tanner Beason.

“Victor (Vazquez) does a great job and Sacha (Kljestan) gave me the ball on the side,” Grandsir said of the play through an interpreter. “I wanted to cross the ball to Chicharito, but he (Beason) touches the ball and it goes in the goal.”

It didn’t matter what happened on the play, as far as Galaxy head coach Greg Vanney was concerned. The result was a badly needed goal.

His lone complaint was for things to have been a little less nerve-wracking. The Galaxy dominated a first half in which they easily could have led at least by 2-0 and then held on through some trying moments down the stretch, thanks to a brilliant effort from goalkeeper Jonathan Bond. The off-season acquisition from England finished with 12 saves, the most saves  in any club win or shutout in franchise history.

“It feels good,” Bond said. “Kind of been a bit unlucky in the games beforehand where I felt I made quite a few saves but came out on the wrong side of the result.

“Just nice to make some saves and for us to hold on and win one-nil. Especially in a rivalry game it feels good, so I’m very happy.”

Bond was tested only nine minutes into the match when he tipped a 15-yard attempt by San Jose’s Eduardo Lopez just over the bar. He was at his best with just over 10 minutes remaining when he came off his line to deny Andres Rios, who had broken through the Galaxy’s back line and headed toward the net. And he was up to the task only three minutes later with back-to-back saves, including one standout effort on a rebound try by Rios.

Teammates surrounded Bond after the final whistle to congratulate him for his superb performance.

“We got a little bit pulled apart on the defensive side of things,” Vanney said, “and obviously Bondy made a couple of incredible saves to keep us in there at the end.”

Bond smiled when told social media members were comparing him to a brick wall following the match.

“It’s just one of those things,” he said. “Early in the half I made a nice, early save. Then you feel a bit more confident maybe, a bit more comfortable. To be honest, they had quite a few shots outside the box, then later in the game slipping between and getting quite a few crosses in and put on some real pressure.

“It wasn’t just me, we defended really well as a back unit. Although I had 12 saves, I thought we defended quite well.”

But did the victory, which improved the Galaxy’s home record to 4-0-0 this season, have to be so difficult? Vanney didn’t think so.

“When we get into those moments where we had our chances we need to put them away,” he said. “The game shouldn’t have been as close down the stretch as it was. We need to be a bit more lethal when we have those chances, and that’s maybe the next step for this team, that we don’t have to suffer and sacrifice down the stretch.

“It’s the start of a new project with a group that we’re piecing together. Guys are coming together. You take every win you can get and the process of building toward the vision of the group you ultimately want to be. It’s a group that is working hard, that over the course of this game did a lot of things right, and in the end it’s a group that had to suffer a little down the stretch to hold on to three points with the way the game played out.

“That’s soccer,” he continued. “You can’t ever really dictate how the game’s going to go for 90 minutes. You just have to adapt and adjust, especially if you don’t put away the chances you have. We had to do our best to scrap it out.

“We’ll take it. It’s the sign of a good team that’s finding ways to take points. Going into the break we have five wins and two losses and we’re in a pretty good spot.”

There was, however, a potential problem amid the victory celebration. Midfielder Jonathan dos Santos suffered an apparent injury to his left leg and had to be replaced by Adam Saldana in the 51st minute.

Vanney didn’t sound particularly concerned, but he was being cautious.

“He’s had issues through the early part of the season with cramping in his calves at different moments. He’s had calf issues,” Vanney said. “I don’t know that it is anything beyond the tightening up and feeling like he really couldn’t move the way he wanted to out there or if there was any fear of further damage or risk that was associated with why he could not really continue.