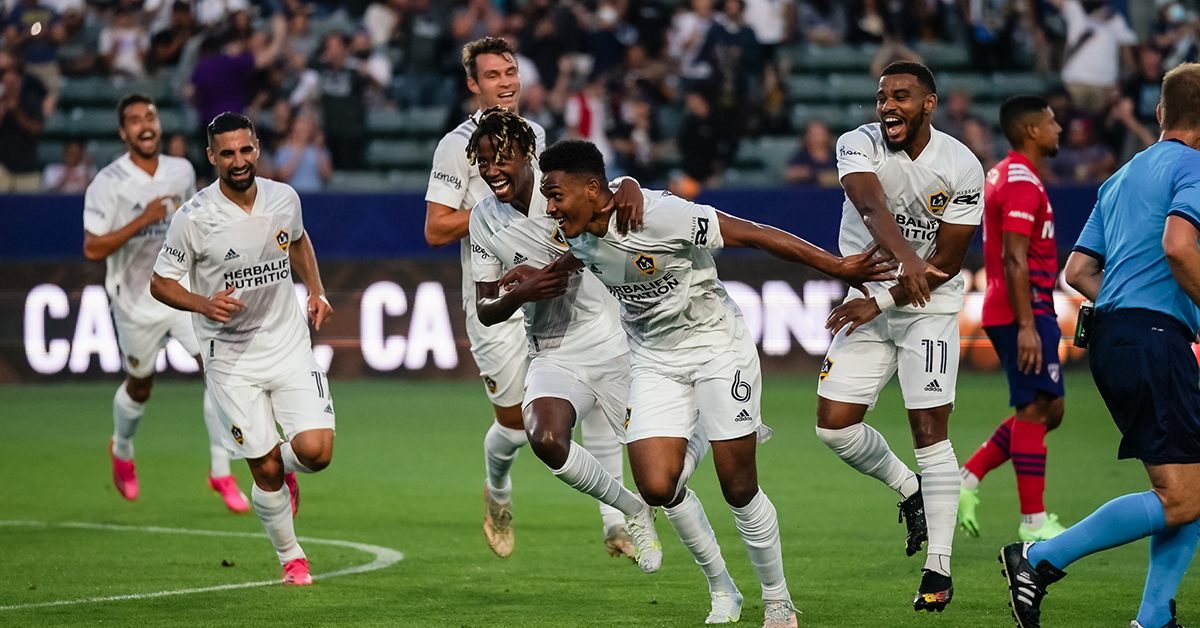 Galaxy Find Goals and GOAL SCORERS in win over Dallas

CARSON, Calif. — The LA Galaxy seemed to take their lack of goals against Sporting KC over the weekend personally. Despite being in the right places, Sunday’s loss wouldn’t allow them the reward of scoring a goal.

That changed on Wednesday night at Dignity Health Sports Park when the Galaxy (8-4-0) scored three goals in a 3-1 victory over struggling FC Dallas (2-5-5) in front of 16,453 fans while keeping pace in a very competitive Western Conference.

LA Galaxy head coach Greg Vanney needed to fill out a roster while missing ten players due to either injury, suspension, or international duty. That included Javier “Chicharito” Hernadez, who still leads the Galaxy and MLS in goalscoring this season even after missing out due to a mild calf sprain.

But from kickoff, it seemed the Galaxy were going to punish Dallas. They controlled possession, pressed passing lanes, and exploited space at will during the opening minutes. And it was evident that goals would be coming from all of that movement.

Rayan Raveloson started the scoring in just his second game as a member of the team. Raveloson, who was starting in place of the injured Sega Coulibaly at center back, was tasked with keeping the ball out of the back of the net for most of the night. But he had a few forays forward for the Galaxy, and in the 17th minute, he got onto the end of a Victor Vazquez corner kick and headed the ball past goalkeeper Jimmy Maurer. It was Raveloson’s first goal for the Galaxy in just his 107th minute with the team, and the goal only seemed to strengthen his defensive resolve.

Not to be outdone, Kevin Cabral scored 10 minutes later. Cabral had seen a header of his saved by Mauer in the 7th minute — a shot that looked it would finally see the young Frenchman finally score for the Galaxy. But Cabral finally made it count when he finished a Sebastian Lletget pull-backed cross into the bottom right-hand side of the net.

“Kevin [Cabral] had a great header early in the game off of a fantastic run and a ball that the goalkeeper makes a fantastic save,” Vanney said of his young goalscorer. “But you know, great for him to actually put one away. I know he’s felt a little bit of pressure and been feeling sort of the mounting pressure of not finishing, not getting some of these chances put away that he’s wanted, and I had a little word with him yesterday about just relaxing and his mind.”

The Galaxy dominated the rest of the half and watched Samuel Grandsir almost add another goal to the Galaxy’s total when he clipped the ball off the crossbar after a beautiful run in the 29th minute.

The Galaxy would get their final goal just six minutes after the half when Zubak jumped on a poor defensive backpass by Ryan Hollingshead that saw Zubak steal the ball and then round Maurer to slot home a tight-angled finish.

It would turn out to be a crucial third goal, and one that would allow the Galaxy some breathing room to attempt to close out the second half. Because Dallas wasn’t simply going to roll over.

Galaxy goalkeeper Jonathan Bond was only called upon to make three saves the entire match, and the Galaxy held Dallas to a single shot in the first half. However, Dallas would get 12 shots in the second half, with five of those on target, including their only goal of the game from Fanco Jara in the 71st minute. Julian Araujo and Jorge Villafaña seemed to limit Dallas’ touches on the outside, and Nick DePuy continues to be more than serviceable sitting next to Raveloson, who seems comfortable at any position Vanney puts him in.

For all his effort, Grandsir couldn’t get himself on the scoresheet. But in the second half, he did put a ball into the back of the net. It just wasn’t the ball that was in play at the time, and it did not count.

But overall, the Galaxy looked in control for large stretches of the night and will get to rest comfortably for the next ten days as the Galaxy go through another short international break for the CONCACAF Gold Cup.

The win against Dallas kept the Galaxy just two points from Sporting KC (3rd in the Western Conference, 4th in the Supporters Shield) but still five points from league-leader Seattle Sounders with one game in hand. And their 2.00 PPG is good enough to be tied for second-best in MLS.

The Galaxy scored three goals in a game for the fourth time on Wednesday night, with all of the previous performances ending in a win for the club. And consistent with the Galaxy’s last 11 games, they followed a loss with a victory and have not lost consecutive games in 2021.

“I think we’ve always done a pretty good job of like, you know, if we drop points the next game, we always rebound,” Lletget told Spectrum SportsNet’s Nikki Kay after the game. “And I think we’ve done a good job of that. And I thought we were very disappointed coming off playing Kansas City and not getting three points there. Because we played another great game at home, but we just couldn’t put the ball in the back of the net. And today, that was our emphasis. As long as we get a goal, we know what we can do on the ball, so we dominated.”

Vanney will now hope that some players will return from injuries, and the roster might get a little bit healthier before resuming the season on July 17 when they travel to play the Vancouver Whitecaps in Sandy, Utah. But he’s also very pleased he could get a win with the roster he had on the field tonight.

“Obviously, it’s a group that has learned to win quickly this year and learned to win in some slightly different ways with some slightly different mixes,” Vanney said of the relatively shorthanded lineup. “I don’t know if we’ve ever put the same lineup on the field twice — and we’ve had some that are relatively close to others. We’ve had very different benches from game to game. We’re still trying to build our group, and now we have, between injuries, suspensions, call ups, we’re just… that’s what an MLS season is about. You’ve got to get something from everybody, and that’s why it’s important to keep everybody in the mix. And keep everybody ready to play.”