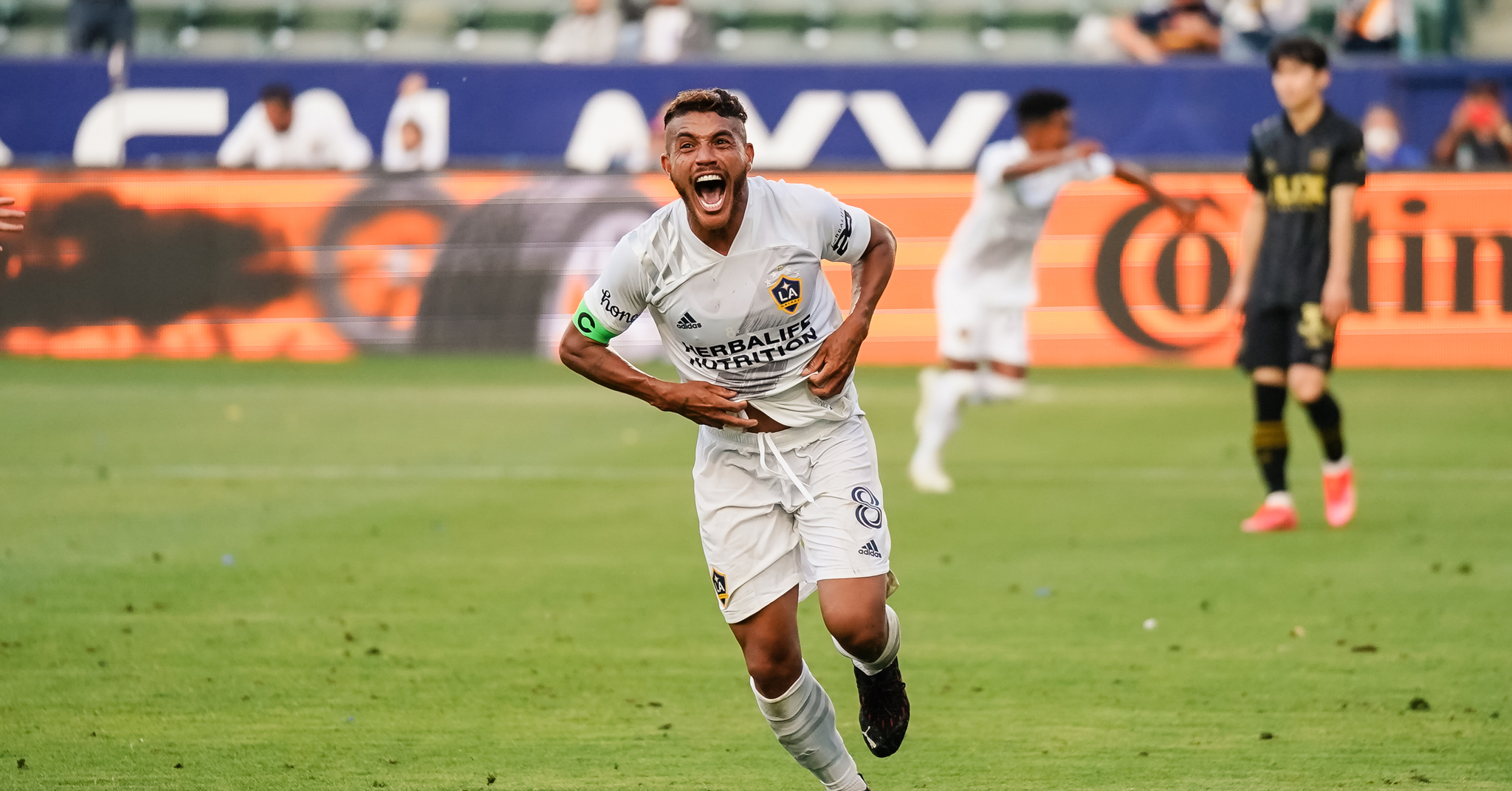 There’s nothing like a derby game between two bitter opponents, and Saturday’s battle between the Galaxy and LAFC at Banc of California Stadium (4 p.m., FOX, FOX Deportes) is certain to add its share of highlights to the burgeoning rivalry.

This one, however, might be missing the allure of some of the past showdowns. The Galaxy, fourth in the Western Conference at 11-8-2 for 35 points, have lost two games in a row. LAFC, ninth in the West at 6-9-5 for 23 points, hasn’t won since a 2-1 decision over Real Salt Lake on July 17. Galaxy goalkeeper Jonathan Bond was quick to point out records mean little, if anything, in games with this appeal.

“It doesn’t really matter whether you’ve lost your last two games,” he said. “It’s kind of anything can happen in these games. Whoever wants it more generally wins.

“I’m not too worried about the results leading into this game.”

It may be lacking two of Major League Soccer’s marquis players in the Galaxy’s Javier “Chicharito” Hernandez (out with a calf injury) and LAFC’s Carlos Vela (right quad), but the anticipation of the latest chapter of this heated rivalry hasn’t dissipated despite their absences.

And the fact both teams are not playing their best soccer at the moment doesn’t matter, either. LAFC is 0-5-2 since the win over Real Salt Lake, but Galaxy head coach Greg Vanney wasn’t about to take his crosstown rival lightly.

“Sometimes the game is fine lines. The margins can be really fine in the games,” he said. “They still play a good level of soccer, a good brand of soccer, they’re still making it very difficult on the opposition. But again, it comes down to executing in both boxes, finishing the chances you get, protecting your goal, and not giving anything away on the other side.

“They’ve done a nice job of controlling games the way they always have in between the 18’s, but they haven’t been able to put away chances and they’ve conceded those odd goals that have put them on the wrong side of results.

“They’re always, always a dangerous opponent,” he continued. “You never know what day the ball is going to start to hit the back of the net for them, then they’re a different team when it comes to results.”

Galaxy midfielder Jonathan dos Santos said he and his Galaxy teammates have a good idea what to expect this weekend.

“We know about LAFC,” he said. “Maybe they are not in the best moment but they always want to give their best. We have to be careful. We know the importance of this game. we are very focused and we have to fix some problems we’ve had the last couple of games.

“I think the team is ready to play.”

Bond, who said he still has vivid memories of this season’s first meeting between the teams, a 2-1 Galaxy win on May 8 that was enlivened by an earthquake that shook Dignity Health Sports Park, was asked if he sees any of his LAFC counterparts around town and perhaps boasts of that victory.

“Maybe they’re avoiding me,” he added with a grin. “I don’t see them. If we did, I’m sure we would have a nice back and forth. I’ve yet to see anyone.”

Vanney said he is looking forward to the game as an opportunity for his side to snap a two-game losing streak.

“Two teams that are certainly trying to regain some momentum,” he said. “It’s the first time we’ve lost two games in a row, so we certainly want to try to rebuild some momentum out of that. The fact that it’s a derby just adds to the intensity of it all, probably adds to the emotion of it, all that kind of stuff.

“At the end of the day both of us are trying to regain some momentum as we move into the second part of the season.”

Corner Of The Galaxy · Sweep the Leg, no mercy, go for the jugular. The Galaxy await El Tráfico

It’s been almost three months since Hernandez was last seen on the playing field, and Galaxy fans will have to wait a little longer for another sighting of the team’s leading scorer.

Hernandez, sidelined with a nagging calf injury, has returned to the training field but Vanney is taking a cautious approach with him. Hernandez likely will make his long-awaited return in the Galaxy’s game at Colorado on Sept. 11.

His injury — a similar one a year ago kept him out of the lineup for two months — forced him to withdraw from this week’s MLS All-Star Game festivities which included his participation in a skills challenge.

“It just doesn’t really make sense. If we were going into the playoffs, if we were going into a scenario where we have multiple games we might push this a bit more, but because of the time on the other side of it we really have an opportunity to benefit from that time.

“He has the opportunity to benefit from it to really get himself sharp and ready to compete,” Vanney went on. “Our hope and expectation is he’ll be ready to go on the other side of the international break.”

It has been a difficult season for dos Santos, who recently suffered the loss of his father and has battled through various injuries. But soon he will face another dilemma — will he sign a new contract with the team?

Dos Santos is eligible for a new deal at the conclusion of this season, but he was non-committal when asked about his future plans. Dos Santos has said in the past he would like to end his career with the five-time MLS Cup champions, but he was not nearly as definitive in his remarks Thursday.

“Of course I would like to stay, but I know how it works, MLS,” the popular, 31-year-old midfielder said. “To be honest, I don’t know if I want to stay next year, but I will give my everything for the team for the next three, four months. I don’t know what’s going to happen in the future and I cannot predict that.”

Dos Santos also was asked if he would like to play elsewhere in MLS should he not come to terms with the Galaxy or return to his native Mexico and play in Liga MX. He gave no clear-cut reply to that line of questioning, too.

“I don’t know, to be honest,” he said. “I want to stay close for my family. It will be MLS, Mexico … I don’t know. I want to think of the present right now, enjoy my moment with my team, the LA Galaxy.

“The future will come.”

Vanney has stressed an improvement in his team’s defensive mentality, and the reported upturn in intensity during this week’s training sessions indicate he means business.

Vanney clearly was upset with his team’s defense in last Friday’s 2-1 loss to San Jose, and the Galaxy are tied with Houston for the second-most goals allowed, 32, in the Western Conference. Only Portland, at 39, has a more porous defense in the West.

Vanney attributed his team’s defensive troubles to a packed schedule, few training days and the addition of new personnel, particularly on the back line. Despite those ongoing challenges, he was intent things will improve or else.

“Defending is never one thing,” he said. “Defending is usually a series of things that have to be tightened up. When you don’t have the training days to put the guys on the field and put them into that training environment and get those things to happen quickly, call them out and get fixed, unfortunately, it carried over for a few games and it almost became a habit. That’s what we want this week and the next two weeks, clean those things up.

“I don’t like that they’re happening. Am I surprised? Not really. Just the nature of us having mixed groups, putting the team together, sometimes having different back lines, not having training days with guys coming in and out. It is a bit of a sign of a lack of continuity within the group from game in and game out.

“The teams you typically see at the top of the Supporters’ Shield (race) typically are putting out the same 11 every week and maybe have a couple of adjustments here and there,” he added. “It’s not teams that are adapting week in and week out. For us, it’s very much a work in progress.”

Bond agreed with that assessment.

“At the start of the season we definitely had a lot of change,” he said. “There was change with the personnel and stuff, but now it’s an area we need to improve. I don’t think we’re ever going to be a team that just goes clean sheet nil, nil, nil, nil. We don’t play like that. We play on the front foot, attacking football. That’s what the fans want to see.

“It’s just about giving ourselves a better chance at winning a game by being just that little bit more getting those small things right, a little bit more responsible defensively.”