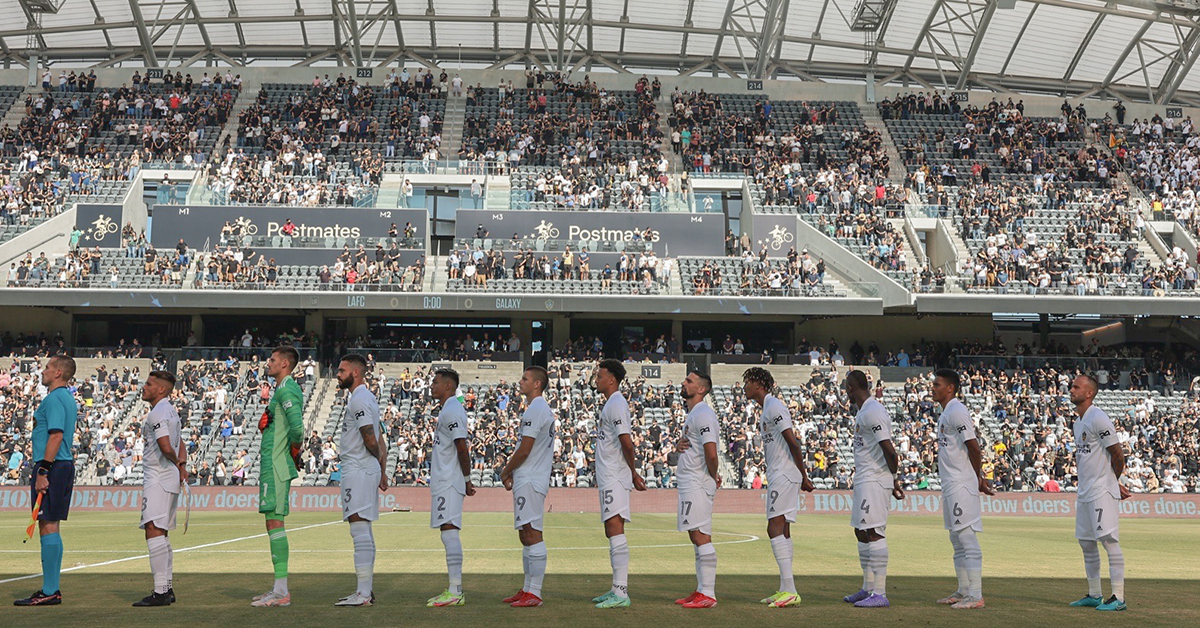 Galaxy fight back to grab a point from LAFC

LOS ANGELES, Calif. — The LA Galaxy will be happy with a single point after drawing cross-town rivals 3-3 on Saturday afternoon at Banc of California Stadium in front of a reported 22,032 fans.

The Galaxy were buoyed by two goals from Dejan Joveljić, and a single game-tying goal netted just 4 minutes from time by Kevin Cabral.

But by and large, it was a fun and chaotic El Trafico in a rivalry that never fails to produce wonder-goals, head-scratching defensive moments, and its fair share of controversy. And having a nearly full stadium didn’t hurt either.

Greg Vanney was rightfully proud of the way his team went about finding the game’s tying goal and certainly loved the fight but says there is still plenty to do on defense before this team can really be good.

“I think too often we create our own demise,” Vanney told reporters. “And in many ways, you know, when we are, you know, our backline sometimes is getting pessimistic and moving backward when our midfield and front group is trying to step and get pressure on the ball. Huge spaces happen between our backline and midfield line. You know, I feel like our backline needs to be a little bit braver at times about recognizing and helping our midfield to get pressure to the ball and to squeeze space and condense space.”

Vanney started a team that was one of his strongest of the year. Missing only Javier “Chicharito” Hernandez to a calf strain that hasn’t seen him on the field since a June 26th victory over San Jose. But with a midfield of Rayan Raveloson, Jonathan dos Santos, Sebastian Lletget, and Cabral, there was plenty to get excited about.

The Galaxy (11-8-3; 36 points) survived a first-minute scare when Julian Araujo looked to get tangled with Diego Rossi in the Galaxy’s penalty box. And while LAFC (6-9-6; 24 points) claimed that Rossi was tripped from behind, video replays proved less than conclusive, and referee Allen Chapman didn’t signal for the foul.

The Galaxy opened the scoring on Joveljić’s great touch in the 20th minute when he received a looping cross from Araujo that was misplayed by the LAFC defense. Joveljić tipped his shot skyward and beat the goalkeeper and two defenders for his first goal of the season and an early Galaxy lead.

And while the Galaxy would go on to control large swaths of possession for the remainder of the half, they couldn’t escape a second penalty shout in the 43rd minute. That’s when defender Niko Hamalainen was judged to have held onto Cristian Arango inside the box on a dangerous header toward the back past. Arango would bury his spot-kick to tie the game at 1’s.

LAFC would take the late score and use it as momentum in the second half. They scored in the 58th minute behind one of two goals from Brian Rodriguez. Rodriguez dribbled through the penalty box and around four Galaxy defenders before roofing a tight angle shot.

Vanney had a unique perspective on the goal when he warned Galaxy players of just what happens when you allow a goal like that.

“I mean, a guy can’t carve through us like we’re cones in our box and then put the ball up top,” he said of Rodriguez’s goal. “That just can’t happen. It’s that simple. All of us will be watching that video for the next 20 years on highlight reels, and that’s not a position that any of us would want to be in.

“So I was in one of those when Preki (Predrag Radosavljević) cut us up in 1996 a few times, and it’s not something you want to keep watching over and over for the rest of your career.”

Joveljić would answer back four minutes later with a left-footed shot from inside the box to bring the score level once again. His catch-and-shoot turn and the quick pass from Lletget allowed Joveljić to find just enough space at the far corner of the net to slip it past Tomás Romero.

But in the 66th minute, two minutes after Joveljić had leveled the score, Rodriguez would net his second after a long, hard shot from Diego Palacios saw Galaxy goalkeeper Jonathan Bond cough up a big rebound. The rebound was hit back up the middle, and Galaxy defenders couldn’t get to it faster than Rodriguez, who easily beat Bond from close range.

But the final goal of the match was one of the best from the Galaxy’s perspective. With Efrain Alvarez into the match and Vanney switching up the formation to a 3-5-2 to push both Araujo and Hamalainen on the wings, Alvarez was able to slip Araujo free in behind LAFC’s defense. Araujo drove to the end line before cutting the ball back to a waiting Cabral, who finished it past diving defenders and goalkeepers in the 86th minute.

“I knew as soon as Efra (Alvarez) got the ball, he was gonna play me into space, and I knew with my speed that I was just gonna try to get in behind and behind the defender,” Araujo said of the goalscoring play. “I’ve seen everybody coming back to protect the goal, and I seen Kevin (Cabral) just standing right there. So I just wanted to play it back. Greg wants to get to the end line and cut it back, and I think that’s what we did today.”

It was Cabral’s third goal in his last four games and capped off a well-earned draw for the visitors.

“I think the guys obviously, the effort they put in, the grittiness, the commitment to just stay with it, to keep pushing forward, as we got down a couple of times was, you know, was outstanding,” Vanney said. “Guys were gassed, and they just kept going, they kept pushing and kept fighting.”

The draw keeps the Galaxy in fourth place in the Western Conference and helps the club keep pace with the Colorado Rapids, who drew their game on Saturday as well. And while the Rapids have two games in hand, the Galaxy are just two points away with a 14-day international break upcoming.

“These are the games that I’ve always grown up wanting to play in, and this is why we play football today,” Araujo said after the final whistle had blown. “But it was an amazing atmosphere. Our fans are were there with us the 90 minutes. It was a very good game overall. The adrenaline was there the whole 90 minutes, so I’m happy.”