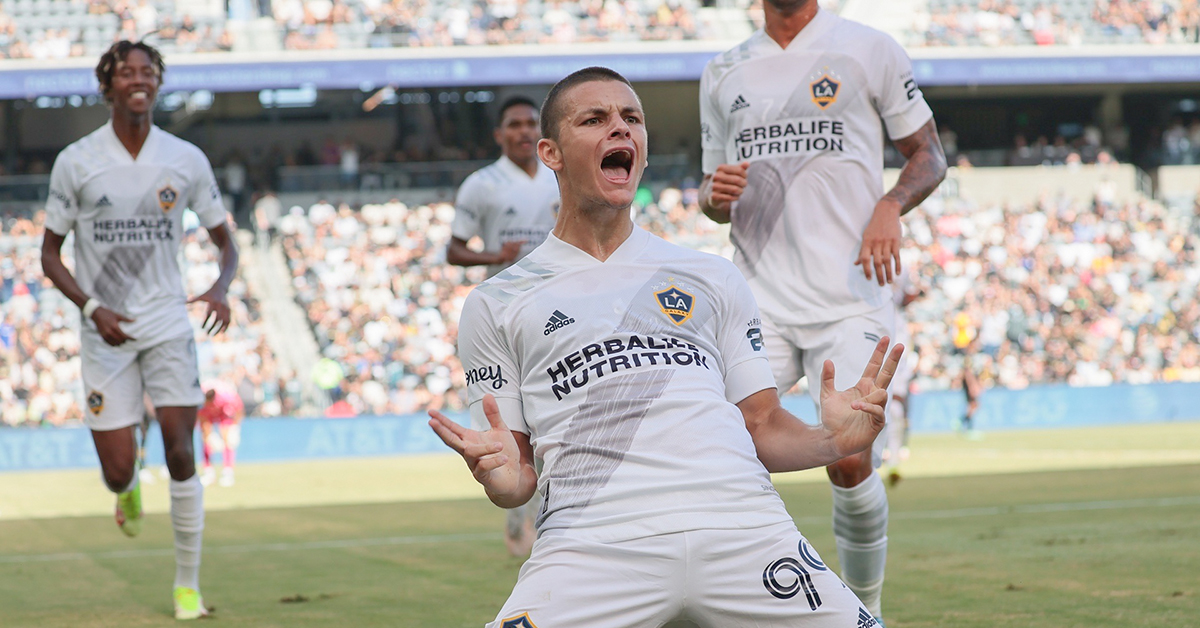 It might have taken a little longer than he had planned, but LA Galaxy forward Dejan Joveljic finally lived up to his reputation in the most supercharged of conditions Saturday.

The Serbian international scored the first two goals of his MLS career to help give the Galaxy a thrilling, 3-3 tie with crosstown rival Los Angeles FC in front of a Banc of California Stadium crowd of 22,032. The win snapped the Galaxy’s two-game losing streak but kept LAFC winless in its last eight matches (0-5-3).

Joveljic, who signed a 4 1/2-year contract with the Galaxy on Aug. 5, had spent the 2020-21 season on Austrian side Wolfsberger AC, with whom he scored 20 goals in 46 appearances across all competitions. Galaxy head coach Greg Vanney was confident Joveljic could help ease the Galaxy’s scoring struggles with Javier “Chicharito” Hernandez sidelined since late June with a calf injury.

“He’s a goal scorer and he has a career because he puts the ball in the back of the net,” Vanney said of Joveljic. “He needs a little time to continue to adapt to his teammates and his team, the league, and all the things that are there for him to reach his full potential and continue to grow as a player.

“For him to get a couple of goals tonight, to get things started, to get that joy of putting the ball in the back of the net and feeling that is wonderful. If we can start to get him rolling and get some goals and get Javier back, hopefully in the next match …”

Joveljic had just one assist in his three previous appearances with the Galaxy, but he was up to the task in Saturday’s highly entertaining meeting, the second of the season between the bitter rivals. He scored his first goal in the 20th minute, when Julian Araujo’s crossing pass into the penalty area deflected off LAFC defender Jesus Murillo. Joveljic quickly gained possession and scored over fast-charging goalkeeper Tomàs Romero as Murillo and Tristan Blackmon tried desperately to keep the ball out of the net.

Joveljic then put his fingers to his ears in what looked like an attempt to say he couldn’t hear the pro-LAFC crowd, but he insisted the gesture was spontaneous.

“I saw that video when I scored. I don’t know why I did it,” he said with a laugh. “It came in the moment.”

His second goal, which tied the game at 2-2, occurred in the 64th minute from a sharp angle just to the side of the goal area.

Joveljic insisted he’s had no trouble adapting to Vanney’s system of play. He pointed out he’s simply been unlucky to score. Until Saturday, that is.

“I was comfortable, but I didn’t get so many balls that I can score, you know?” He said. “This game comes, I had some opportunities and I made some goals.

“Sometimes they come, sometimes not but I have to do my job.”

Joveljic said finally breaking into the scoring column was particularly rewarding, especially with the goals coming in one of MLS’ biggest and most heated derbys.

“Actually, amazing feeling,” he said. “When you score it’s always good, but it’s special in a derby. A fantastic feeling and I’m very satisfied and looking forward.”

He called the stadium atmosphere amazing.

“I want to say our fans are amazing also,” he said. “I want to say the opponent’s fans were also good. But yeah, the atmosphere was amazing. I really enjoyed it.”

He also pointed out one thing made Saturday’s contest different from big games he’d played in during his time in Europe.

“Fans are crazy,” he said with a grin.