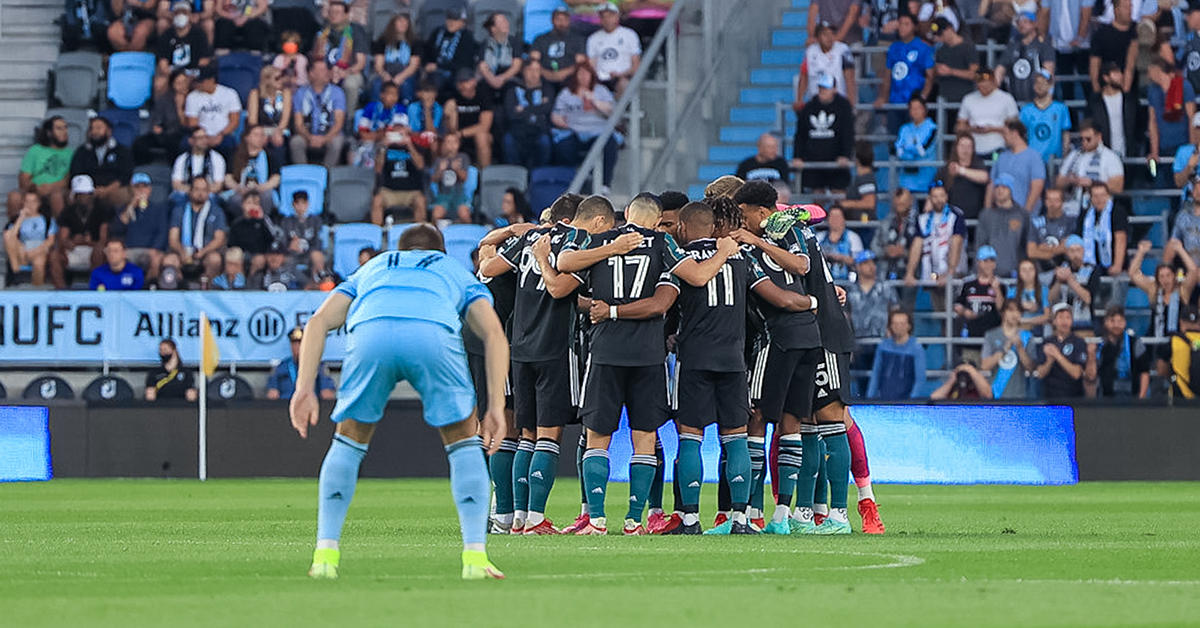 Galaxy getting punished by their own mistakes in loss to Minnesota

The LA Galaxy allowed two goals in the first 20 minutes as they floundered on the road to a motivated Minnesota side.

The LA Galaxy’s winless streak extended to six games after a Saturday night 3-0 beat-down from Minnesota United at Allianz Field. Going 0-3-3 in their last six games and with a chance to solidify their home-field playoff standings with a win or a result on the road, the Galaxy, instead, came out like a team that didn’t know the game was supposed to start when the whistle blew.

The lethargic beginnings allowed Minnesota (9-8-7; 34 points) to score twice in the first 20 mins of the game, and from there, it was about avoiding embarrassment. Something that the club also failed to do on the night.

Emmanuel Reynoso scored both of Minnesota’s first-half goals (4th-minute and 20th-minute), with each coming from a similar spot just outside the box toward the center of the field.

Reynoso, known league-wide for his left foot, used his best asset, under minimal pressure, and took advantage of the loose marking and lack of understanding from the Galaxy.

The first goal saw defender Niko Hamalainen head a long ball into the middle of the field. That’s where Reynoso, cutting inside, launched a left-footed shot that planted Jonathan Klinsmann to his spot and gave the Loons the early lead. Sebastian Lletget was Reynoso’s next victim, and he showed the US International no mercy but calmly moving the ball to his left foot and fired off the fingertips of Klinsmann. Each of his shots was heavily hit, and each gave Klinsmann — filling in for the injured Jonathan Bond, who is recovering from a quad injury — little chance at stopping it.

LA Galaxy head coach Greg Vanney was worked up after the match. Attributing the loss to continual defensive miscues and not taking care of the details in defending.

“The first goal again, as I said, it’s a long ball. We head it back into the middle of the field, their player picks it up, and puts it in the back of our net. Like if we had the ball in the middle of the field, we need to head the ball to the outside, so we don’t put ourselves into a problematic situation. That’s the first goal. The second ball again comes out in transition. Again, because our attention to detail and the transition is still loose, we’re not close enough to guys. We try to then react and get close to guys, then we get played around, and they get on the other side of us. The ball gets to Reynoso. Reynoso is left-footed. We let him cut back into his left foot. Good player puts the ball in the back of the net, right? two mistakes, two goals.”

Minnesota would add another goal from Ethan Finlay in the 66th-minute when Samuel Grandsir kept Finlay onside long enough to allow him to break into the backfield and beat Klinsmann to his near post relatively easily. Klinsmann had a poor night overall, but in the third goal, he didn’t effectively cut down the angle as Finlay had played himself outside of the posts.

But the Galaxy won’t be able to blame him for their woes.

The entire club seems to lack the urgency that had made them a dangerous team at the beginning of the year. And the Galaxy have failed to score those early goals that have allowed them to control the game.

Javier “Chicharito” Hernandez, Jonathan dos Santos, and Victor Vazquez all made a difference as they made substitute appearances in the second half. Still, even with a lopsided amount of pressure and some good buildups, the Galaxy looked anything but dangerous in their finishing.

In fact, down by three goals, the club seemed content to pass the ball into the back of the net instead of sending waves of pressure against a bunkered Loons defense.

It was a fail from start to finish.

But the Galaxy’s schedule isn’t getting any easier. They have two more games on the road during September and, with just nine games remaining, will play just four of those at Dignity Health Sports Park. But not even the friendly confines of DHSP are necessarily reassuring. The Galaxy own a 0-2-2 record in their last four home matches and haven’t won at home since August 4 (1-0 vs. Real Salt Lake). The club has to stretch back to August 14 to track their last win overall (1-0 win over Minnesota United on the road).

Vanney doesn’t think the Galaxy are regressing, but they are indeed being punished for each and every mistake they make. And that in and of itself seems regressive in nature.

“I think we are getting punished for our mistakes,” Vanney explained. “I still think that there are a handful of teams in the Western Conference — I’d say four probably that come to the top of my head (Seattle, Minnesota, Colorado, and Kansas City, he would go on to explain) — that I think are very experienced, senior teams that just make you beat them, and they don’t beat themselves. These teams don’t beat themselves, you have to beat them. And if you make mistakes, you’re on the wrong side of the game quickly, right?

“But I put that group of teams as mature teams that just don’t make mistakes. And our group, over the course of the season, we make too many mistakes, which makes us very vulnerable.

“And in games in the past, we’ve been able to get the first goal which maybe allows us at times to build a little momentum and things, and this last stretch, I don’t know when we really got the first goal and held on to it for any period of time that the opposition had to expose themselves a little bit. We’re conceding the first goal too often. And most teams are just locking it down on us and making it difficult for us to score.”

Things in Major League soccer are heating up, however. Unfortunately for the Galaxy, they’re heading the other direction.

While the Galaxy will head into next weekend still holding the fourth position in the Western Conference with 38 points, Minnesota closed to within four points of LA with the win. The Portland Timbers host LAFC on Sunday for a chance to get them to within one point of the Galaxy, and with so many position-verifying and position-climbing games happening down the stretch, the Galaxy need to find something that approaches a playoff level.

Vanney thinks the last ten games of the season are when you find out what everyone is playing for.

“Now the standings are pretty clear,” he told reporters after the game. “You’re either playing to get yourself into the playoffs, or you’re playing to position yourself in the playoffs. You’re playing to set yourself up to try to win a championship, and you’re trying to find your level right now. And so every game feels a lot different than it did for the first 20 or so because now the standings are starting to be clear. There are only so many games left.

“We play against each other in our conference so much. There are really only so many points that actually impact the standings right now. And so, again, everything matters. And we have to eliminate mistakes. And some of the eliminating mistakes is just by sheer security sometimes, right? But again, it’s attention to detail. It’s part of the growth of this group that needs to happen.”

The Galaxy are back on the road in Texas next weekend, where they’ll play Austin FC.