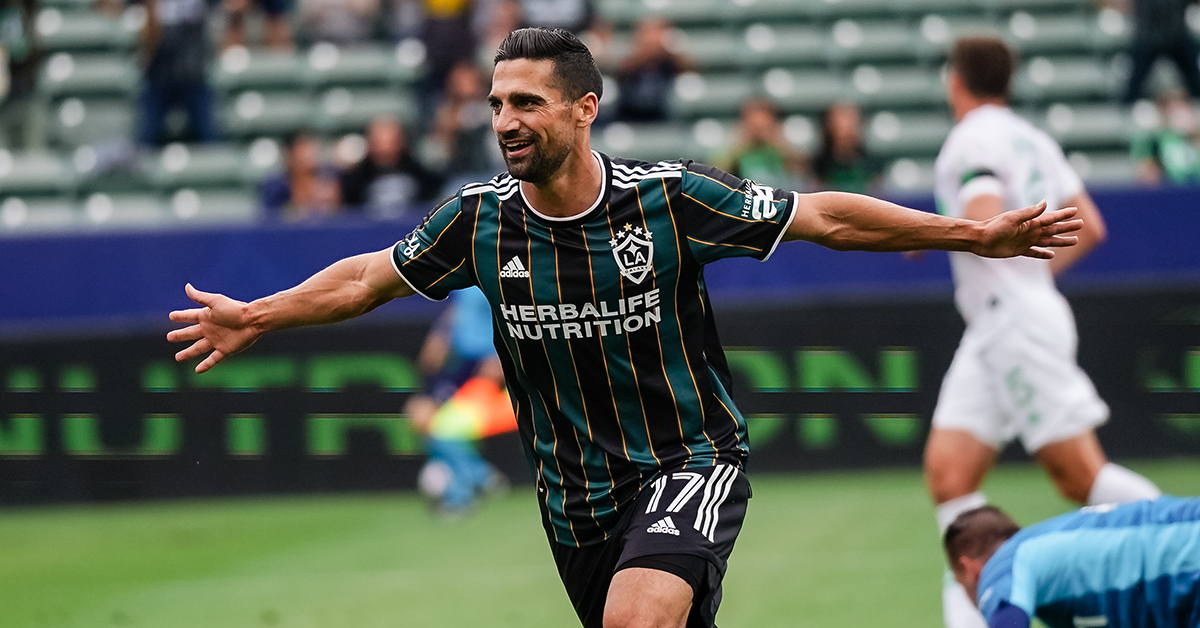 Sunday’s Galaxy game against Austin FC at Q2 Stadium (6:30 p.m., ESPN2, ESPN Deportes) is shaping up as a big one for the five-time MLS Cup champions who are mired in a six-game winless streak and desperately looking to improve their chances for postseason play in a Western Conference playoff race that is getting tighter almost by the minute.

Sunday’s clash also is an important one for Sebastian Lletget, who is expected to make his 150th appearance in a Galaxy uniform. The 29-year-old midfielder almost was at a loss for words when it was brought up by reporters Friday.

“It just shows how far I’ve come from playing in England, coming into the league, not really knowing what to expect, just needing an opportunity and this club gave it to me and what I’ve done with that opportunity so far.

“I’m humbled and I’m grateful,” said Lletget, who came up in the West Ham United system and signed with the Galaxy in May of 2015. “Definitely the story is not over yet, but it’s definitely a nice milestone, for sure.”

Lletget is in his seventh season with the Galaxy and has career numbers of 21 goals and 26 assists. He had a career-high seven goals in his first year with the Galaxy in 2015 and enjoyed his best year statistically in 2020, when he had six goals and four assists.

He said scoring the first goal of his MLS career in a 1-1 tie at Columbus on June 13, 2015 convinced him he could play in the league.

“For any player,” he said, “I think that was a monumental moment where you kind of make your stamp and you prove to yourself, more importantly than anything, that you can be here. For me that was Columbus away, to be exact.”

Proving he belonged in MLS wasn’t an easy task, he admitted. Getting comfortable in his new environment turned out to be a painstaking process.

“It definitely took me months to really adapt to everything involved with this league, and it’s only gotten more difficult and more challenging as the years have gone by,” he said. “Thankfully I’ve grown with the league. For people who come into the league, they’re always very surprised at the level.

“The newcomers kind of have a hard time getting used to things here. Because it is tough … it’s a very athletic league.”

Austin FC is in last place in the Western Conference and has only five victories in 25 matches (5-16-4), but Galaxy head coach Greg Vanney is expecting nothing but a difficult test this weekend.

“Austin is a dangerous opponent in many ways,” he said. “They really don’t have anything to lose. They can throw whatever they want at us in any way they want to and take whatever risks they want to get a result.

“They’re at home in front of their fans in their new stadium. They don’t have anything that’s holding them back. They have nothing to lose and they can go for it.

“We have everything to play for,” he continued, “and obviously we have to bring that mentality.”

Uruguayan midfielder Diego Fagundez leads Austin with six goals and Paraguayan midfielder Cecilio Dominguez has five goals and four assists. Sunday’s game is a rematch of the Galaxy’s 2-0 victory on May 15 at Dignity Health Sports Park.

The Galaxy’s injury situation was decidedly upbeat for the Austin match. The lone exception was central defender Derrick Williams, who has not played since going 71 minutes in a 1-1 tie with Colorado on Sept. 11.

Vanney was unsure of his status for Sunday.

“Derrick is the only one right now that’s questionable,” he said. “He had a groin issue and just how he reacts today and how he looks as we go tomorrow will determine his involvement in this particular match.

“Everybody else is good and healthy and ready to go.”