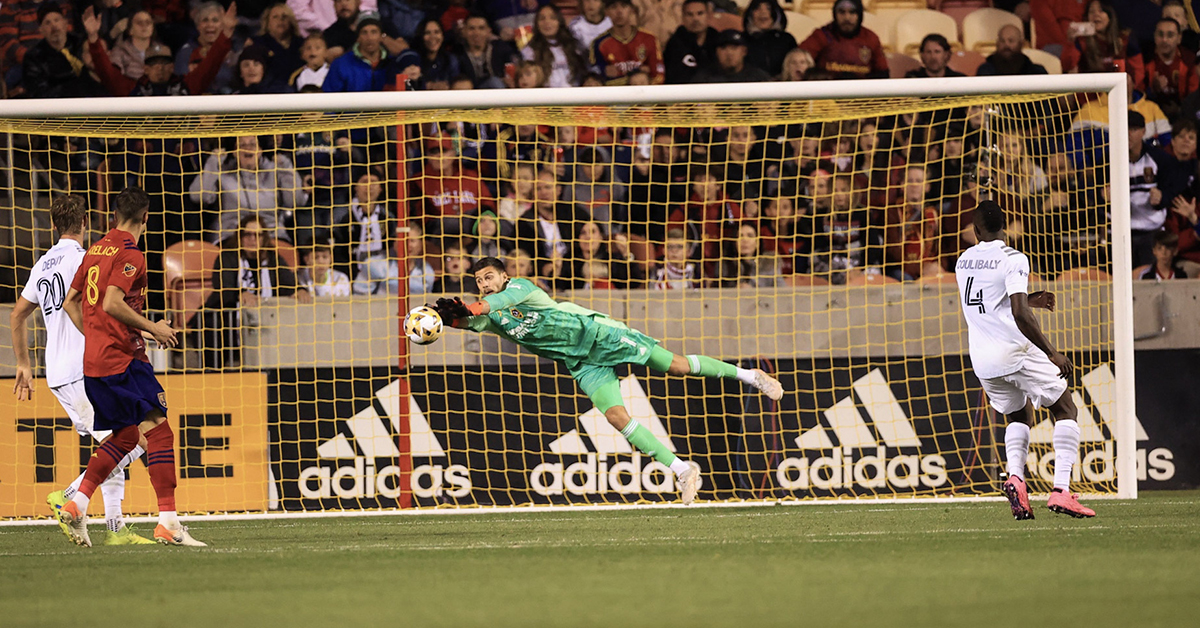 Galaxy find another way to lose. Fall to RSL in stoppage time.

LA Galaxy find their low point of the season with a stoppage-time loss to Real Salt Lake.

Greg Vanney mused a week ago that he was surprised at how the LA Galaxy (11-11-5) had found “many, many different ways to make mistakes.” The Galaxy had given up early goals, late goals, they headed balls into dangerous areas, and on Wednesday night’s match, they gave up a goal in the fifth minute of stoppage time to a daring self-volley to get absolutely no points from their three-game road trip.

The 2-1 victory for RSL at Rio Tinto Stadium in Sandy, Utah, was enough to avenge their 6-1 defeat to the Portland Timbers over the weekend, and it was enough to see them leapfrog the Galaxy for fifth in the conference — thereby solidifying their playoff hopes.

In comparison, the Galaxy reached a new low point. They lost their third game in a row (the longest losing streak of the season), they added to a now 8-game winless streak that stretches back to August 14, and they fell to sixth in the Western Conference (their lowest positioning in the conference all year) while holding a one-point advantage over seventh-place Minnesota and a four-point advantage from being out of the playoffs altogether.

So despite some positive road gameplay, the results aren’t improving. And the momentum and the losing streak are now decidedly against them. The Galaxy are sailing into a headwind that shows no signs of letting up until someone can grab the wheel and right the ship.

Vanney said he felt something different from this team than any sort of panic.

“I was extremely proud of the fight, the work, the performance, the play of everything about it except for we conceded two goals, two very bad moments, within the game,” He said. “But I don’t know a time in my history that a team has come into RSL – a galaxy team especially – and dominated them this much. We had many chances. We only were able to get one.

“I think the fight that the guys showed each other and showed on the field today, and the way it ended, you know for me, I wouldn’t be surprised if this was a big lesson and turning point for this group because I feel a different energy in the locker room right now than I’ve ever felt this entire season. I hope it is. Because you know this group laid out an incredible effort today.”

Vanney got the 12th goal of the season from Javier “Chicharito” Hernandez in the 76th-minute, and he got an outstanding performance from 19-year-old Efrain Alvarez. Alvarez finished the night with 88-mins played, one assist, and a slew of game-changing passes and moves that should have resulted in more goals than just the one the Galaxy were thankful to have.

But with 20 shots in total and just five shots on target, the Galaxy offense isn’t clicking the way it was in the opening third of the season. And with balls missing the back of the net, the club is struggling to find the results at the end of their offensive moves.

Sebastian Lletget continued to have a quiet year for the Galaxy in a worrying trend of not getting the most out of the 29-year-old midfielder. Lletget, who was just called back into the US Men’s National Team for World Cup Qualifiers in October, has struggled to find a comfortable fit in Vanney’s offense. And while he linked play together in a more advanced position against Real Salt Lake, he also took up space that Alvarez would go on to exploit after his substitution in the 65th minute.

The lack of offense for the Galaxy and the lack of understanding when they possess the ball has created a vicious circle for the club where they allow the first goal — Galaxy are 1-9-3 when allowing the first goal and have been outscored 29 to 10 in those games — are forced to play against a bunkered defense that they can’t break down, and then get beat on the counter-attack. It’s a self-fulfilling prophecy that has seen the Galaxy fall into this pattern in seven of their last eight matches with no wins while allowing 13 goals and scoring just five times.

“Our final passes need to be a little bit more precise and a little better,” Vanney explained to reporters after the match. “The timing of things and the intensity of our run and the connection of the final pieces just — it’s just the last thing that’s there. But I thought it was better tonight than it was last game. And we just need again, we need to hit the back of the net on a couple of these. We had some breakaways, we had some other looks that we’ve got to put those away. I mean, you can set the team up to succeed and the guys did all the work they needed to succeed and they put themselves in the moments to succeed and then you just have to you have to put it away to actually get the success that you probably deserved on the night. We just didn’t get it tonight. But if we keep doing this, it will turn. It will come. Hopefully sooner rather than later.”

The defense, a constant focal point for Vanney, has allowed seven goals in their last three games, and the club sits at a minus-six goal differential after 27 games played.

But while tonight shows hints of those previous failings, there were fewer of those things. And picking up on the tiny amount of momentum from a good first 60 minutes against Austin FC and the performance against RSL, the Galaxy say they’re feeling confident despite the results consistently going against them.

But they also seemed shellshocked after this loss. And that should be expected when 25-year-old Anderson Julio splits defenders Sega Coulibaly and Nick DePuy in the fifth minute of stoppage time and flicks the ball up to his own foot from outside the box, and fires home across Jonathan Bond and into the net. Or when Damir Kreilach takes the last kick of the first half on a beautiful cross out of nowhere and gets the ball to spin back across the line after almost being saved by goalkeeper Jonathan Bond.

“It’s not the fact that they scored in the last minute,” Bond responded when asked why he seemed so troubled by the goal, “it’s how we can put so much emotion, and effort, and grit, and you know, we talked before the game what we were going to do and we did it. We conceded first. We should never have conceded first, which kills us. Then it’s like we now have to react from that bad moment. But we reacted. We created loads of chances. We scored. We looked like the team that was going to score the winner while we were having balls across the face of the goal. They were tired. They were dead.

“And like one long ball up and the guy flicks it over someone’s head and volleys it in and it’s just that that’s the bit where it’s just like, to put that much emotion in a game and get that result is really, really tough to comprehend.”

Vanney will get some heat for pulling Chicharito and Alvarez just two minutes from a full 90 minutes, but both seemed to have run out of gas. And at that point, the Galaxy should have locked up the point and hopped on the plane. Vanney should also get some credit for getting Dejan Joveljić and Victor Vazquez into the game in the second half. Both of which led to some dangerous chances and more creativity.

Referee Tori Penso will get some criticism for calling for six additional minutes, as well. There were no significant stoppages in the second half besides one big collision between Chicharito and Albert Rusnák, and the sub-patterns seemed to take only a normal amount of time.

That being said, the Galaxy had everything in their hands, and they let it slip away again. It’s a worrying pattern when the players can’t meet the biggest of moments. But maybe this is all part of learning how to compete as a team?

So while the Galaxy have found a new and heartbreaking way to lose, they seem to be confident that they’re right on the edge of putting the entire puzzle together. Maybe in just the nick of time. But they should also try winning a game before anyone is going to believe them.

The club will jump on a plane and return to Los Angeles late Wednesday night or early Thursday morning. They’ll get a day to rest and recover before jumping back into preparation for their El Trafico match against LAFC on Sunday. As it currently stands, the Galaxy could do a lot of good to keep their biggest rivals out of the playoffs while solidifying their playoff berth.