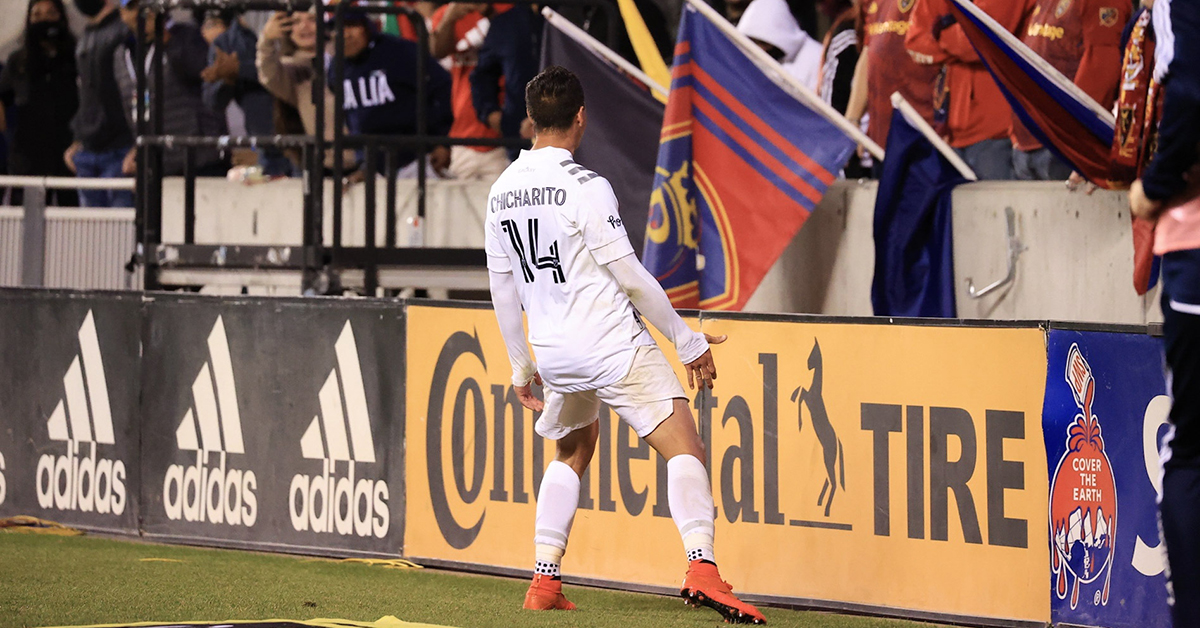 NOTEBOOK: Galaxy ready for round three of El Trafico

The LA Galaxy are mired in an eight-game winless streak, haven’t won in more than a month and their once-likely participation in the upcoming MLS Cup playoffs isn’t such a sure thing anymore. The five-time champions are 11-11-5, good for sixth place but only one spot above the post-season cutoff line in the West Conference.

But all is not lost, or so say Galaxy striker Javier “Chicharito” Hernandez and head coach Greg Vanney as the club prepared for Sunday’s showdown with crosstown rival LAFC in front of an expected full house at Dignity Health Sports Park (5 p.m, ESPN, ESPN Deportes).

Their last two performances, a 2-0 loss to Austin FC and particularly a heartbreaking, 2-1 defeat to Real Salt Lake, have left the Galaxy feeling good about their immediate future.

Hernandez said he and his teammates aren’t dwelling on what has happened lately.

“You need to just turn the page, take the positives, learn from the mistakes you did,” said Hernandez, who has 12 goals this season. “Be grateful, enjoy your life and try to do the best you can. And I think that’s the mindset, that’s the mentality that we have.

“The past we cannot change it, it is what it is and we need to maintain the things that we’re doing pretty well and then learn from the mistakes that we have done in the past. Just keep going and we have a beautiful game on Sunday and a great weekend, so hopefully we can get three points here in our home in that derby.”

LAFC (9-12-6) has its own share of problems, not the least of which were the recent departure of last year’s Golden Boot winner Diego Rossi (now playing in Turkey) and the disappointing play of Carlos Vela, who has been troubled by a right quadriceps injury and has only five goals. LAFC is 3-8-3 since mid-July and is in the throes of a three-game winless streak that followed three consecutive victories.

Vanney called LAFC a “good team” despite their recent, downward trend and was confident his Galaxy would pose a stiff challenge Sunday. The positive vibes he felt following last weekend’s last-second loss to Real Salt Lake apparently have left him feeling more optimistic than usual.

“We’re trying to stay focused on the fact that we’re trying to find the best form and our best version of us here down the stretch, and I thought we were a lot closer,” he said, referring to the loss to RSL. “I thought it was the most complete 90-minute game that we’ve played this year without the result on the end of it being what we wanted it to be, but I thought there were very few stretches in Salt Lake, which is a very difficult place to play, where Salt Lake actually had control of the game. It was really in our hands for much of the game.

“We look at the positive things and the things that we need to duplicate as we come back to another tough match at home against a good team, LAFC, which also has an emotional, probably an emotional position with their results. We have to take the positives and the things that we did well and try to duplicate those and finish our chances when we get them and see halves out when they’re getting close to the end of halves. Things like that.”

Sunday’s match is the third meeting between the sides this season. The Galaxy won the first one, 2-1, on May 8 at DHSP. The teams then tied 3-3 on Aug. 28 at Banc of California Stadium.

Former Galaxy standout London Donovan will be honored with a statue of his likeness and be inducted into the club’s Ring of Honor on Sunday. Festivities also include the finishing touches on a Landon Donovan mural at Bonita Street Elementary School at 10 a.m. that day in Carson.

The statue unveiling at Dignity Health Sports Park, which will begin at 3 p.m., marks the second time the Galaxy have recognized a former club player with a statue, with David Beckham so honored in 2019. Donovan then will join the likes of Beckham, Mauricio Cienfuegos, Doug Hamilton, and Cobi Jones in the Ring of Honor at halftime of the LAFC match.

Vanney, a teammate of Donovan in 2008 — when the Galaxy tied San Jose for last place in the West with an 8-13-9 record — raved about his impact not only on the Galaxy but the sport in general.

“Landon is first and foremost, an exceptional player,” he said. “He has been at multiple clubs that have won. He went to San Jose and helped turn that team into a winning team and a winning franchise. He came to LA and was able to do the same thing. He’s got an incredible intensity and desire to compete and to win.

“I think he was smart in my time playing with him here and LA was, you know, probably one of the worst seasons that the Galaxy had at that time in 2008. And it was he and David (Beckham) and the two of them, you know, notoriously didn’t know how to win together yet. They both figured out they needed each other to win games.

“He’s smart enough to understand how to win,” he continued, “and that doesn’t always mean you have to be best friends with somebody. That means you have to find the best in each other and you have to give everything to a cause much bigger and greater than yourself.

“And he obviously was able to do that to the tune of more championships.”

Vanney pointed out his impact on the game, in general, was more far-reaching.

“He’s always been an ambassador for the sport and for kids in the sport and the game and someone who’s always brought, I think, the right energy and the right vibe to the game,” he said. “Obviously a great human being, but for me what stood apart is just his will, his ability to win and to impact a group and find the way to work with a group to get results.”

Center back Derrick Williams, who hasn’t played since Sept. 11 because of a strained groin, trained on Friday and could be available for Sunday’s game-day roster.

Vanney wasn’t quite ready to say the Irish international was good to go, but he did sound fairly optimistic about his chances.

The news wasn’t nearly as upbeat for left-back Jorge Villafaña, who has been troubled by a hyperextended knee and bone bruise that forced him to miss the team’s last match against Real Salt Lake.

Vanney didn’t sound confident the veteran would be available for selection this weekend.

“I don’t know if he’ll be able to turn around for this weekend or not,” he said. “I know he was pretty sore coming out of the (Austin) game (on Sept. 26) and pretty sore still yesterday. But I don’t know if there’s anything that they can do to help him prepare for Sunday.