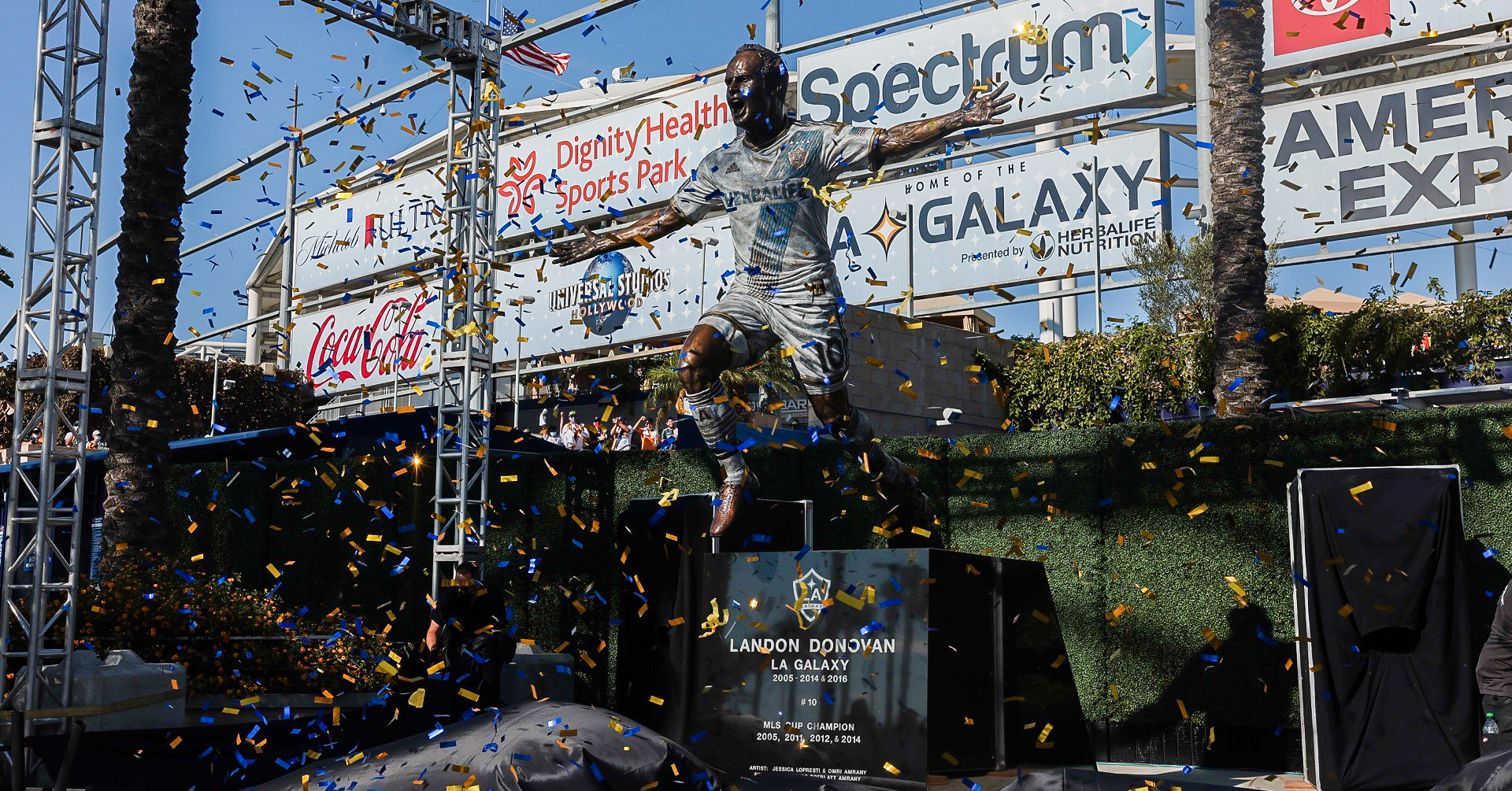 LA Galaxy legend, Landon Donovan, was honored with a statue in front of Dignity Health Sports Park on Sunday afternoon.

Landon Donovan never felt comfortable with celebrity status or basked in the limelight, but he’ll have a difficult time not feeling a little more special than usual after the club unveiled a statue of his likeness on Sunday at Dignity Health Sports Park.

The Ontario native became the second player in club history to be so honored — David Beckham was the first in 2019 — as a sun-baked crowd of close to 1,000 people looked on. The event drew family members, several former teammates, and Major League Soccer Commissioner Don Garber, who was one of eight speakers to praise the 39-year-old who won six MLS Cups (two with San Jose and four with the Galaxy) and had the league’s Most Valuable Player award renamed in his honor.

Donovan’s day to remember also included his induction into the Galaxy’s Ring of Honor at halftime of Sunday’s 1-1 tie with Los Angeles FC.

“You’ve had an impact on this game that needs to be memorialized in ways the statue will represent forever,” Garber told Donovan as the boisterous crowd cheered its approval. “Over the last 10 years that you played in Major League Soccer you thrilled, you inspired, you motivated and you elevated this game in so many different ways on and off the field.”

Donovan, who retired from the Galaxy after the 2016 season and now is manager and co-founder of the USL’s San Diego Loyal franchise, naturally had a hard time taking in the stream of compliments. But he was well aware of how special the occasion was.

“Something like this is a decision made by human beings,” he told the crowd. “There’s no stats that get you a statue. There’s no algorithm. There’s human beings that are making a decision that forever will impact my life and my family’s life, and I’m incredibly, incredibly grateful for this.

“You didn’t have to do it. There’s a lot of people who have earned something like this. And I’m very grateful that you have chosen to do this for me. Thank you.”

Todd Dunivant, Donovan’s teammate for 10 years, said he could tell Donovan enjoyed Sunday’s festivities despite his low-key, unassuming nature. Dunivant called the ceremony, which included a video of congratulations from former Galaxy coach Bruce Arena, “a once in a lifetime special.”

“This is so unique,” Dunivant said, “and he deserves it. This is perfect.”

Dunivant said there was one personality trait that separated Donovan from his peers.

“Just how good of a teammate he was,” he said. “That’s why he was so successful and why his teams won as much as they did. He did more than just stats. Those are things people never see, but it’s why all those banners are hanging from the rafters.”

Another former teammate, Juninho, said Donovan was a mentor to him.

“For me, a young player coming to the team, he taught me a lot,” he said. “That drove me to succeed.”

“I’m happy for him and his family,” he said. “It represents everything he’s done for the sport and for the country. It’s nice for everybody here to see what he’s actually done.

“He always wanted to win, and he would give everything to do it. He was someone you could always count on.