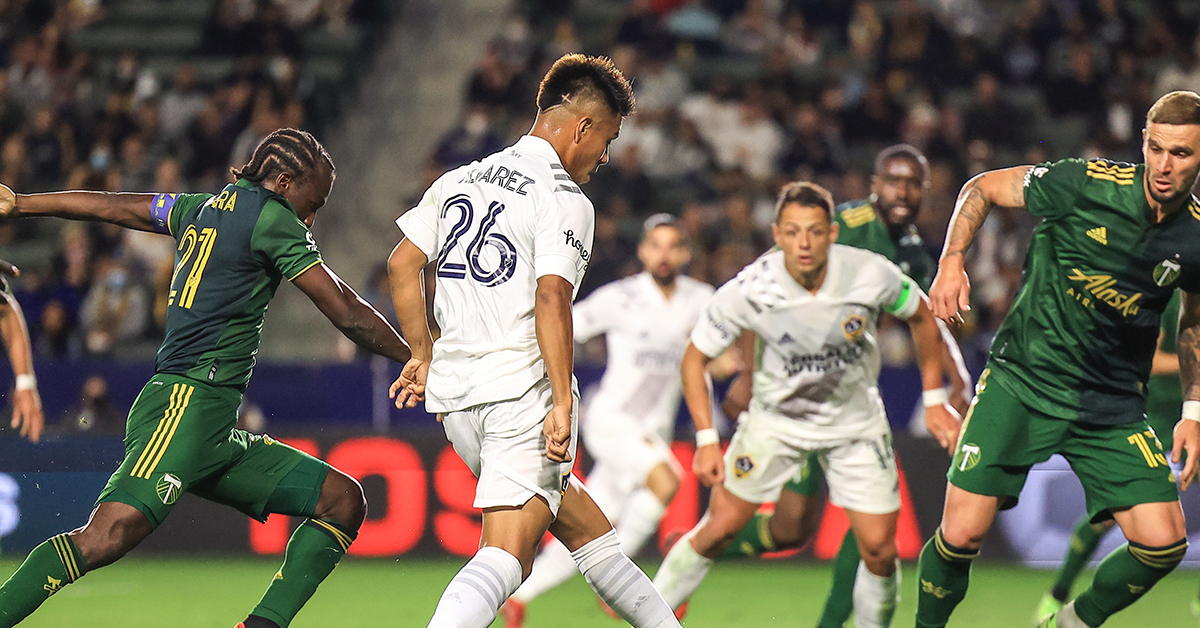 Youngster helps the LA Galaxy get back on the winning side of the ball.

There are no grey areas with the LA Galaxy’s Efrain Alvarez. Those who follow the Galaxy either love him or hate him.

But for every one of his errant passes or ill-timed turnovers, there are moments like he had Saturday, one that led to a 2-1 victory over the Portland Timbers in front of a Dignity Health Sports Park crowd of 15,322, in which all apparently is forgiven.

Saturday’s game was early into second-half stoppage time when Alvarez received a pass from Julian Araujo, evaded Portland’s Diego Chara at the top of the penalty area, and headed toward the Timbers goal. Portland defender Jose Van Rankin tried to knock the ball away from Alvarez from behind but missed and Alvarez was knocked to the ground.

The result was a penalty kick Sacha Kljestan calmly converted to give the Galaxy not only their first win since a 1-0 victory over Minnesota United on Aug. 14, but their first home triumph since shutting out Real Salt Lake 1-0 on Aug. 4.

“First of all,” Alvarez told reporters after the game, “I’m happy we got the win finally. It’s been quite a while … we haven’t gotten a ‘W.’ ”

Alvarez and Kljestan had entered the game with just under 30 minutes remaining — Alvarez for Kevin Cabral and Kljestan for Jonathan dos Santos — and Kljestan said he and his young teammate were intent on changing the outcome into something positive for the five-time MLS Cup champions who were trying to snap a nine-game winless streak against a side unbeaten in its last eight matches.

“I’m proud of Efra because we stood on the sidelines together getting subbed in, and we shook hands and said, ‘Let’s go make a difference in this game,’ ” said Kljestan, who at 36 is 17 years Alvarez’s senior. “For him to come in and make a play … but not only that he was dangerous every time he had the ball on top of the box.

“He’s so shifty and crafty and knows how to use his body really well. He’s a very savvy player for how young he is. He made a really good play.”

That’s something Galaxy head coach Greg Vanney would like to see more from the youngster, provided he improves his positioning on the field.

“That’s one of the things we’ve really challenged Efra with,” Vanney said, “is he’s one of our players who really has the final product. He can scoot past players, he can get assists, he can get goals, he can put pressure on back lines, he’s crafty on the move and slipping balls between lines.

“We don’t really want him dropping back on the other side of the opposition’s midfielders trying to make the game. We want him higher, we want him between the lines, we want him in unbalanced positions. The whole time he was in front of me I kept telling him, ‘Higher, higher, higher.’ Every time he goes high it creates a lot of uncertainty for the backline.

“He’s so tidy and clever in between these spaces … makes it so difficult for defenders,” Vanney continued. “If he keeps doing that he’s going to score goals, he’s going to get assists, he’s going to impact games on a consistent basis as he did tonight and throughout the season.

“I’m glad he came in and provided us that spark.”

Alvarez was more than happy to do that, thanks to some gentle but pointed encouragement from Kljestan.

“He’s a big role model for me,” Alvarez said of the veteran midfielder. “He’s played all over the Europe and the U.S. Not only him but (Javier) Chicharito (Hernandez), Jonah (dos Santos). We have several players that are big, big role models. We try to help each other.

“Every time I go in or he (Sacha) goes in with me, we always try to link up the best we can. We understand each other very well, so we’re like, ‘Let’s go, it’s time for us to change the game,’ and thank God we were able to change the game and help the team today.

“I’m very proud, not only for myself but the team,” he went on. “We needed this win. This is an extra way to get to MLS Cup. We want to win MLS Cup this year, and this is a great place to start.”