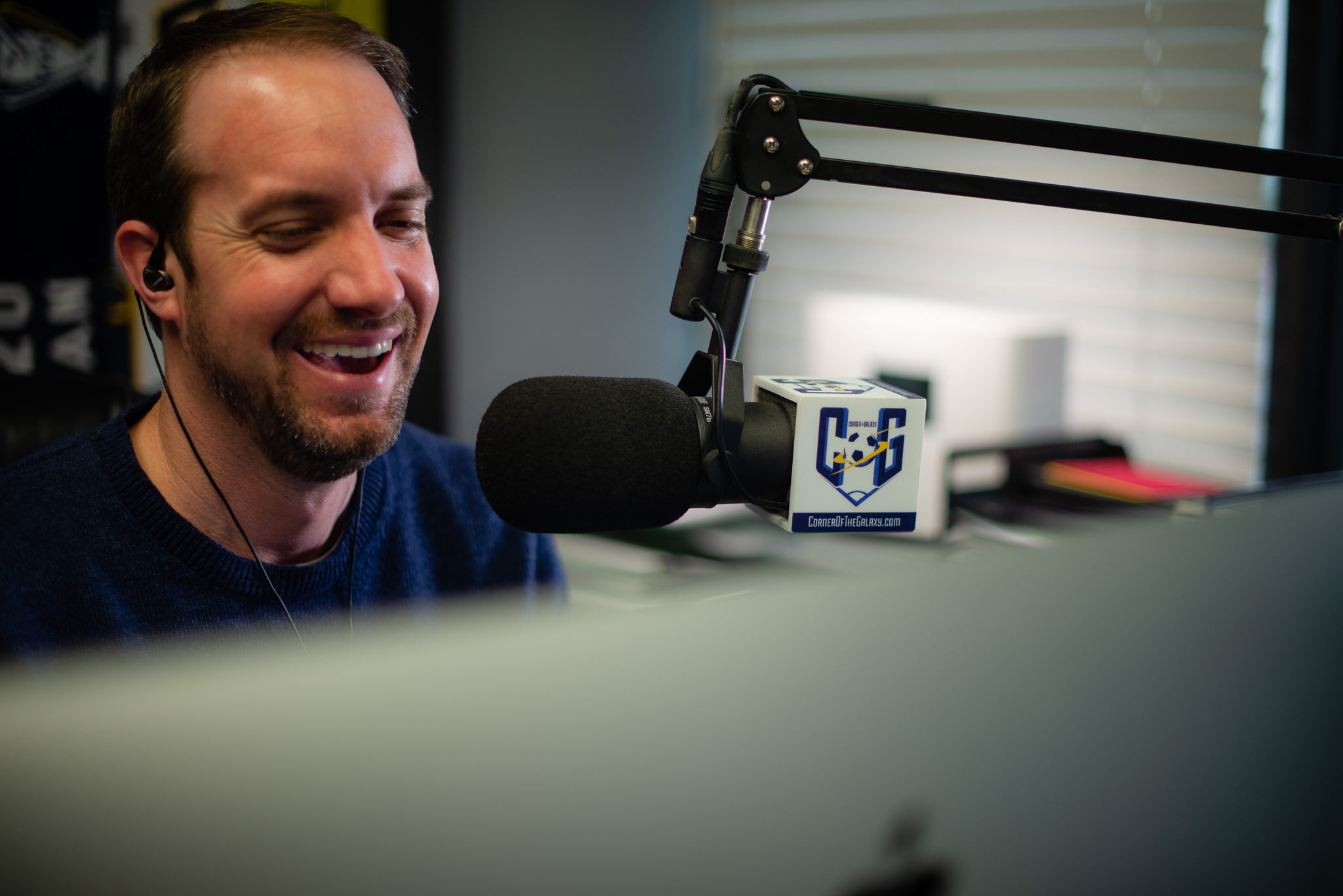 Think of that number for a moment. Yes, it’s an area code, but in this case, it refers to the number of podcasts Josh Guesman has run on his Corner of the Galaxy website.

The Costa Mesa resident reached that lofty figure this past Monday, and even he was stunned by its enormity.

“It’s a ridiculous number,” he acknowledged with a grin as he prepared for his 901st podcast today at 8 p.m. “And I will be the first one to say that because … you don’t think of the big numbers whenever you do it.

Corner Of The Galaxy · Trades gone wrong? Did the Galaxy make the right moves with Steres and Zubak?

The 40-year-old Guesman does not remember the exact date or day of his first-ever podcast, but he knows it occurred a couple of months into the 2009 season. He and his first co-host, Jared DuBois, at that time were fan correspondents for a fledgling podcast called “Around the League” and were asked if they could put together a show with a Galaxy emphasis for a startup podcasting network.

Interestingly, Guesman said he was hesitant at first. This coming from someone who rarely is at a loss for words and admitted he never was the person who raised his hand or talked in class.

“Can you imagine the evolution that’s happened?” he asked with a laugh.

“We’re both talkers and somebody needs to drive the bus,” Guesman continued. “That was Jared. And I told Jared, ‘I’ll give it a try, I’ll try driving the bus. Then you can talk and I’ll ask you questions and we’ll try to have a conversation about it.’ We did our first one and we said we’re only going to do 30 minutes.”

The early shows were a challenge, to say the least. Guesman even had to use his mother’s computer for initial production, but the person running the network still was impressed with their efforts. DuBois and Guesman didn’t know what to call the show at first, but Guesman had an idea.

“We put up a poll on Twitter on what our name should be,” he recalled. “I think maybe 40 people voted on it, but I will admit I rigged that vote because I liked ‘Corner of the Galaxy’ so much I wasn’t going to let anybody screw it up.

The “Around the League” show eventually faded away but Guesman was steadfast in continuing the Galaxy program, which now runs weekly on Mondays and Thursdays. Their 30-minute time allotment grew to 60 minutes and often more, and it remains that length today.

“People were always asking for more than 30 minutes,” Guesman said.

“Eventually we got better. Jared allowed me to develop and get better. We developed a good partnership for a while. Obviously, life happens and Jared got busy.”

Cory Ritzau, a freelancer covering the Galaxy, took over c0-host duties, followed by Wendy Thomas and the Los Angeles Times’ Kevin Baxter on Mondays and Eric Vieira, then a contributor to the “Guys in Shorts” podcast, on Thursdays. Guesman also added a number of other talents, including “Soccer Diva” Sophie Nicolaou, Galaxy Radio Play-by-play announcer Christian Miles and a certain veteran journalist who shall go nameless.

Vieira, in particular, has been a popular addition.

“I never thought about bringing Eric onto the show until one of my listeners said, ‘You should just have Eric as a co-host,’ ” Guesman said. “I’m like, ‘That sounds good.’ Eric came over after that.

“He’s such a talent. That made a ton of sense.”

How popular are the podcasts now? Consider these numbers:

To say the show has grown exponentially would not be far from fact.

“I like to say I’d do this even if nobody was listening,” Guesman said. “Part of me definitely has that in me where I don’t care if nobody listened. I’d still show up on Mondays and Thursdays and do this.”

The popularity of the podcasts also has given him a taste of fame and notoriety — Guesman still vividly recalls the first time he was pointed out at a Southern California athletic outlet because someone recognized his voice — and he can guarantee only one thing about the show.

“I will always be on the show because there hasn’t been one of the 900 shows that hasn’t had me on,” he said with a smile. “I hold the record. Somebody has to record it, and it’s always me.”

Guesman did admit he wondered if the show would catch on from its humble beginnings.

“I think you’re always worried about that whenever you’re creating something,” he said. “I guess I can say if I had a lot of self-confidence I could tell you I didn’t care. I don’t know if that’s true.

“You start it and you want to do well. There’s that need of being good at what you do. The advantage we had was nobody else was doing it for a very long time. In fact, into 2012 or 2013, even 2014, we were still one of the only people doing a Galaxy podcast.

“I’d like to believe we were doing it so well that nobody else wanted to bother.”

He also never had any second thoughts about undertaking his new venture.

“No. This isn’t my job,” said Guesman, who works full time as a vice president for a general contractor that does industrial cold storage. “You never think of the work it entails. If I was starting from zero and understood the amount of work that would have to go into this, I wouldn’t do it.

“Every Monday and Thursday I try to have a podcast. I’m disappointed when I don’t. Just the amount of research that goes into these shows is a lot. There are Mondays where I would really rather not do a podcast. Then I sit down like I’ve done 900 other times and I start thinking about what the show is, put it together, and then five minutes before the show starts I’m all jacked up and ready to go.

“There are plenty of times where I don’t want to do it,” he went on, “but I get to that point where the music starts, I’m ready to hit the live button and it’s showtime, let’s go.”

Guesman tries to spend as much time as he can with his wife Michaela and two-year-old son Jake, but he wasn’t sure if he had another 900 shows in him.

He does have one goal, however, and it has little to do with continuing his show ad infinitum.

“My hope is that I’m 80 years old, sitting in the corner of the Galaxy press box, still going to games,” he said with a laugh. “Maybe I write stuff, maybe I record stuff. But I’ve been there long enough nobody’s going to kick me out of my seat.

“And there will be some young guy and he goes, ‘Who’s that old guy sitting in the corner?’ And somebody will say, ‘That’s Josh, he had a podcast for a while. It was pretty popular.’

“That’s sort of my goal, right there,” he continued. “Then maybe I have a stroke when I’m 90 and in the press box watching a game. That’s all full circle.”