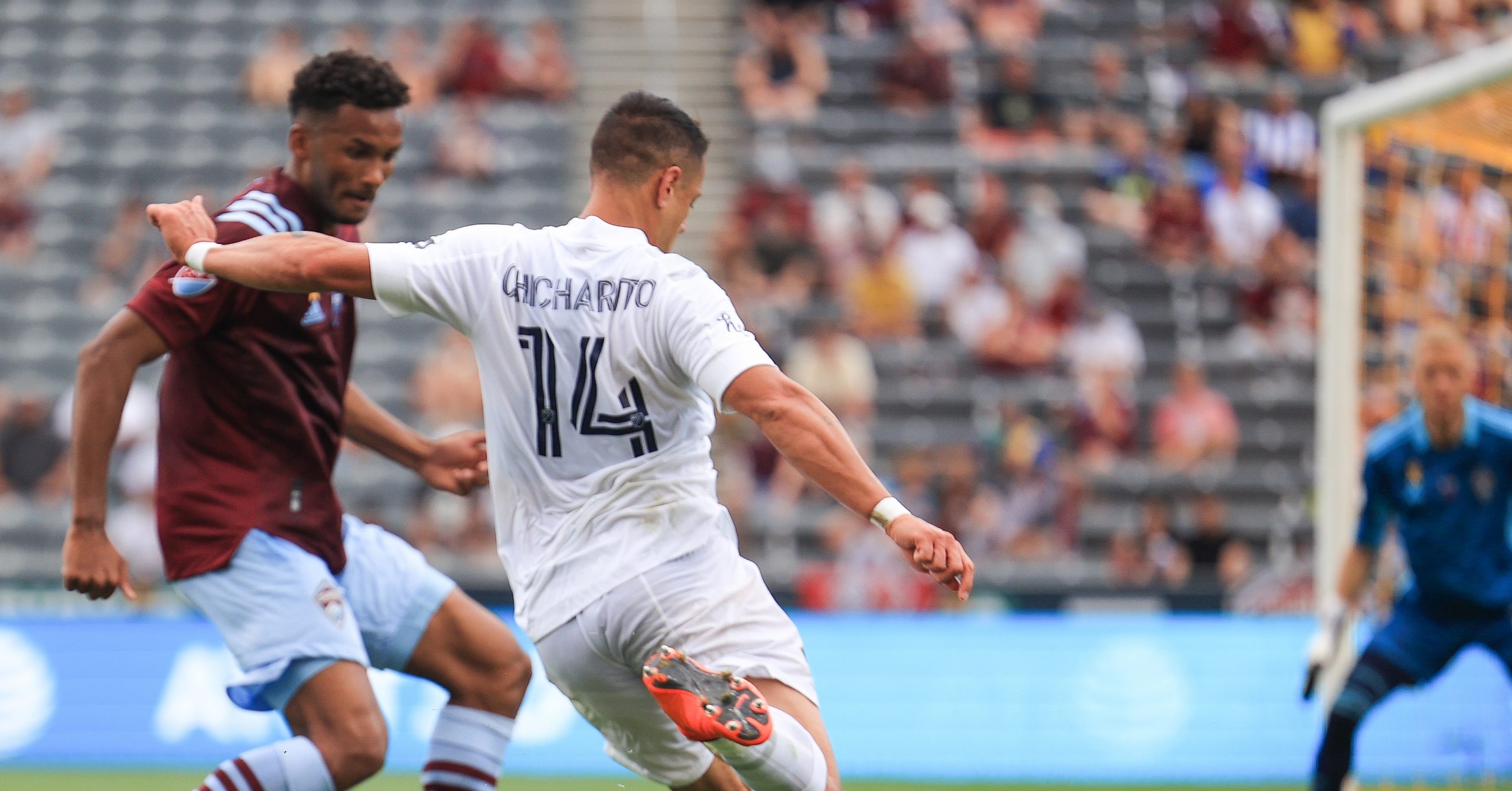 With Chicharito finally feeling healthy, he wants to see what a full-strength LA Galaxy squad can actually do.

The Galaxy’s Javier “Chicharito” Hernandez sounded a little more optimistic than usual in Monday’s Zoom call with reporters, and he had every reason to feel that way.

The Mexican international was coming off his first appearance since late June in last Saturday’s hard-earned, 1-1 draw with the Colorado Rapids and finally appears to be over a calf injury that forced him to miss 12 games. It wasn’t his health that had him in a good mood but rather the Galaxy’s potential to make a run at a potential sixth MLS Cup title.

The Galaxy, for the first time in weeks, appear to be fully healthy with the possible exception of center-back Derrick Williams, who suffered an unconfirmed groin injury in Colorado. Head coach Greg Vanney did not have an update on Williams’ status, but did say he would undergo more examinations.

Williams’ potential absence did not sway Hernandez from his position regarding the Galaxy, who are fourth in the Western Conference heading into Wednesday’s contest with the Houston Dynamo at Dignity Health Sports Park (7:30 p.m., Spectrum SportsNet).

The 33-year-old striker, whose 10 goals are tied for seventh in Major League Soccer, said he was impressed with the team’s resiliency not only during his absence but despite missing players because of suspension, injuries, and international call-ups. The Galaxy are 11-8-4 for 37 points, eight points behind first-place Seattle.

“Last year we weren’t doing even half of what we’re doing right now,” he said. “We are fourth in the conference, in my opinion the most competitive of both of them. Sorry to the East coast, but that’s my opinion.

“I think we should get a little more credit. I’m not saying we’re already done or celebrating, stuff like that. The most challenging, the most attractive thing is we can still be much better. We’re not even scratching the ceiling or surface of how good this team can be.

“Imagine we are like that in fourth position, in our first year with Greg, now it’s going to be the first week we have the whole team,” he said. “Honestly, the Galaxy has done pretty well, but hopefully we can do better, and then in the end the results and everything will tell we were wrong.

“Like (Milwaukee Bucks standout) Giannis (Antetokounmpo) said when he won an NBA championship, ‘What’s next? The next one.’ Two days (to celebrate) at most, then you need to keep going. Like life, you know?”

Hernandez may have been sidelined for 12 games prior to last Saturday’s long-overdue return, but that doesn’t mean he quietly stood in the background. That hardly was the case.

A good example of that was his locker room tirade following a 1-1 tie with Vancouver on Aug. 8.

“From the most humble places, I know my value,” Hernandez said. “I know I’m an important player like the other 23 players. Each one of us has qualities … I’m a very loud guy who likes to speak and communicate, but everything from the place of what’s best for the team.

“I don’t need credit, I don’t want credit. I don’t need personal awards. What I want is the sixth championship for this organization. I’m not better or worse than anyone here. We all have different roles. With my uniqueness and my personality, I try to just express, try to share.

“I’m just trying to do the best I can,” he went on. “That’s the only thing I want to share, honestly, to all my teammates and the people around … we all need to try our best, then from that to try to win a title. Everyone here is working for the same goal, they want to see the Galaxy in the MLS final and lifting the trophy.”

Hernandez disagreed with earlier reports which said his latest injury was similar to one he suffered a year ago and sidelined him for two months. Yes, it involved the left leg again “but a different muscle,” he pointed out.

“I have scar tissue in that leg that made it a little more complicated and affects the injury,” he explained. “It was a completely different one.

“It’s an injury, it’s life. Sometimes you can prevent that. That’s part of the job, that’s part of this sport. You can see Olympic athletes who prepare for four years, they are ready then suddenly they can get injured in the competition. You can’t prevent it sometimes.

“The past is the past, it’s done,” he went on. “I just try to help my team. I don’t think I’m the solution, a hero over there. I’m just one more player trying to do the best he can to help this team improve.”

Improve enough to win another title? That remains to be seen, he cautioned.

“We’re doing good, of course. Good enough to be champions? We don’t know,” he said. “We’ll see. We’re trying to bring one more star to this patch.”

“With respect to their season, they’ve had a difficult time in terms of results,” Vanney said. “Having said that, I think the last game they played the other night was the best game they’ve played all year. They won 3-0, they looked energetic, they looked like they believed and worked hard for each other on the defensive side.

“They looked like a team that found a little confidence in that result. Always makes them a dangerous team. Their record says one thing, but their last performance says something very different.”

Houston, led by Fabrice-Jean Picault’s eight goals and four assists, hasn’t won at Dignity Health Sports Park since Oct. 28, 2018. Galaxy fans may remember that match vividly; Mauro Manotas’ two second-half goals, including one on a penalty kick in the 79th minute, gave Houston a 3-2 victory on the last day of the regular season. The loss officially knocked the Galaxy out of the MLS Cup playoff picture.

Wednesday will be Central American Heritage Night at Dignity Health Sports Park, and the Galaxy certainly have had their share of top players from that part of the world.

Who can forget the likes of Carlos Ruiz, Jorge Campos, and Jaime Pinedo? But the one player who really stood out, as far as Vanney was concerned, was Mauricio Cienfuegos, a 5-foot-6 Salvadoran who played for the Galaxy from 1996-2003 and is regarded as one of the finest midfielders in MLS history.

“In the early years it was amazing at the Rose Bowl in those days the sheer numbers and the volume of fans that would pour into the Rose Bowl and watch the game,” he said. “I would say 80 percent were probably Central American fans of either Mauricio Cienfuegos or Jorge Campos or a group of guys that created an incredible atmosphere for all of us.”

Cienfuegos, he said, was particularly impressive.

“His ability to play in the game but entertain and play with such purpose,” Vanney said. “To be a leader, to want to have the ball and want to make a difference. And for a guy who in stature was not the biggest guy in the world or the fastest player in the world but man, was he clever.

“He was all business, he showed up every day, he was a champion in the way he approached his work and his job and in the way he led our group. I think he was one of the pioneers in the league who really got the league going.

“All of these guys have had an impact on where the league is today and paved the way for the success of Central Americans who have come into our league and the fan base that has grown to love MLS.”